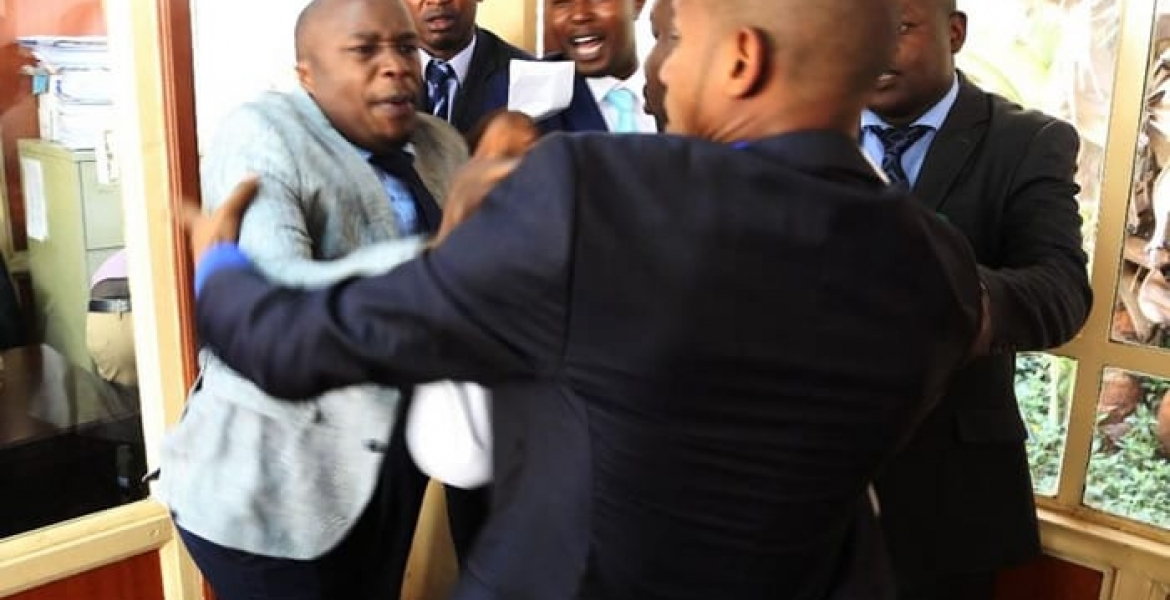 Embakasi East MP Babu Owino says he is not ready for a physical fight with his Starehe counterpart Charles Kanyi Jaguar.

Taking to social media after MP Jaguar said he was ready to beat him up, Owino said he cannot waste his energy fighting as his focus is on serving his constituents.

Jaguar, who spoke in Kayole, asked DP Ruto to give him permission to beat up Owino on his behalf.

"Your Excellency there is a young boy called Babu Owino who insulted you recently. I am asking your permission to let me beat up that boy again and embarrass him, your Excellency," said Jaguar.

In October 2017, the two youthful MPs exchanged blows at Parliament buildings. The fight began after Owino said he would not recognize President Kenyatta as a legitimately elected leader.

The two were later ordered by National Assembly’s Committee of Power and Privileges to apologize for fighting in parliament.
“What happened was very unfortunate. I forgive Babu Owino. I also ask him to forgive me. However, I insist that Babu Owino must respect the president. Should he fail to respect the Head of State – again –, I will deal with him,” said Jaguar at the time.

Has jaguar forgotten that fists fight in public are not allowed.What is he telling the public...that you settle your disputes with fists?How about settle with a scholastic test?Good redponse Mr .Owino.

Damn...this two fools have nothing better to do?? None has done anything for their constituents;but it is what we get for electing parties other than what policies they have, again most of us get bribed to vote...so they have to recoup from their investments.(the money they bribed us with).

News indeed. Celebrities and makangas; who is surprised?

Mr. Jaguar, It is better to stay silent and be thought a fool, than to open your mouth and remove all doubt . If you two Mpig's fight only your constituents will suffer. Know silence is an excellent remedy against slander. A closed mouth gathers no foot. Mr. jaguar, don't advertise: Tell it to a gossip for gossips are frogs, they drink and talk

Let them fight and i want to watch it too. Lat someone video record and post it on youtube. Trust me it will gather about 1 million plus viwes.
Babu W. needs a mchapo with his big mouth and skinny self, it takes a smart guy like Jag to fix him.

Who argues with babu stupid foolish small boy.2 years ago he was insulting uhuru badly behaving like uncircumcised chokoraa which in our gikuyu culture such a person is a big fool.Owino very stupid idiotic stinking uko boy.Useless,Mr Jaguar don't involve yrself with this foolishness of a useless nicompompo.

this njagua fool is ridiculous. he's yet to go to jail for killing someone. is he RUTOS B****C LOL.

Babu Owino needs to mature and take responsibilities for his position seriously. A whole MP and all he can do is insult other members of parliament and other citizens. He is a terrible representative for our nation. All Kenyans should reject insults coming from any leadership in the country. We all want mature,independent, respectable leaders. Those who have no self control should not be in leadership positions.
Those in leadership should be the moral guardians of our nation.