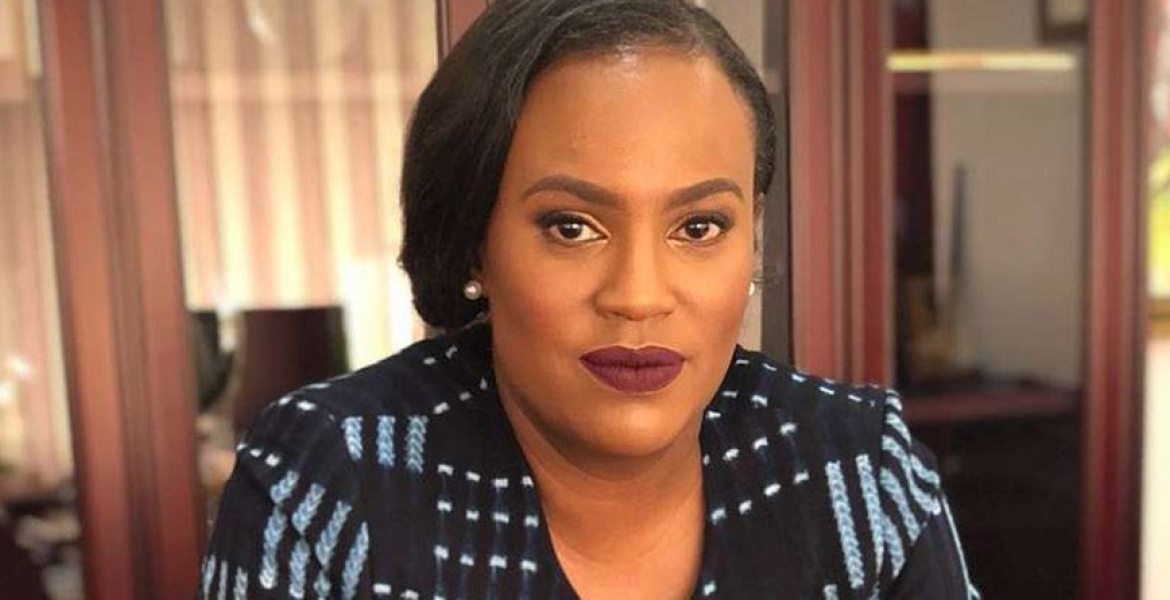 President Kenyatta’s niece Nana Gecaga says she is ready for a new relationship after staying single for a couple of years.

Speaking in an interview with K24 TV, Gecaga, CEO Kenyatta International Convention Center (KICC), says she is still single but explains that she is ready for a relationship should she get a suitable partner.

“At the end of the day, as much as you are a strong woman, you out there being a CEO and doing whatever, at the end of the day you also have a heart and your only wish is that you are appreciated and that somebody sees that and wants to share their life with you,” says Nana.

In an interview with Business Daily in August 2018, the mother of three boys said her biggest struggle in life is finding a genuine partner. The 40-year-old said most of the men she has met are only interested in her status, wealth and networks.

“Getting a genuine partner, I would say. I have struggled with relationships. I have had a couple of good relationships, but mostly it’s been difficult because the people have not been interested in me as a person,” she said at the time.

“But this is not supposed to elicit sympathy. I don’t say I wish I was not born in a family like this, the love that they provide is undisputed. Like I said I've got three beautiful children. I am a single mother and I am not dating or anything like that."

She has also previously opened up about her struggle with alcoholism, saying at some time she used to consume a crate of beer in a day. Nana is the daughter to Jeni Wambui, President Uhuru’s elder sister.

You will get many applications and it will be hard for you to tell who is serious or not. Just be careful on who you choose.

I think Nana is like "1nce bitten; 2wice shy". She is just being Cautious. After all Cowards Live Longer".

Power is a big turn off for most men, but an aphrodisiac to most women! Dilemma sis! Usife moyo, chako ni chako...mingle and dine with the humble whilst casting your net far wider than your normal circle. Samaki ni wengi amongst the mambas baharini, the trick is in sieving through the vijisamaki's, kijisamki and samaki of this world. Good luck.....Clearly, looks is not to blame! From one sis to another.

Thank you sis for your advice to her . As a woman I say , love will find you when you are out doing your daily stuff with your authentic self. Looking too hard and with desperation sometimes yields the opposite results

@Sukari and Formerly guest2.The both of you have given out good advise.But to sukari,Iam curious, should she consider co wife in the net?

Very few people would have been busy downing a crate of beer in college everyday then go home to a plum job. Raise your boys quietly or go kiss a frog.

Oh Lord go on Tinder, or any other dating sites, go to church or other venues where you are likely to meet men if finding love is that important to you already!
Ugh there many singletons around and we are not wallowing in self pity.

Most men you will meet in official or social places are likely to only be interested in your " status, wealth and networks". Go to places where your status is inconsequential or incognito, places like extended exotic vacations, international conferences (where no one cares who you are), fly economy class often, take flights with long layovers, get acquainted with hard core academicians, top professionals or expats with international reputations who may not be moved by your status-most care about discoveries, libraries, labs, professional networks and changing the world. Avoid cadre of men that will directly benefit from your external influences. .....Finally stop looking and work on yourself so that they find you, not you finding them because you bring so much to the table. Thank me if this works!

Are you a Ted Presenter or a Phd who hop from one conference to another or an NGO project guy with a title , Director of Program/project ? Lol Take flights with long layovers - ok hahah personally I would be jet lagged, tired and caring less who is standing near me or dining in one of those boring wifi areas in Schipol or Charles de Gaul lol.

Economy class = everyone is annoyed because of the no leg room, obnoxious passengers, who keep bothering you to go to the bathroom - drinking too much coz alcohol is "free", babies crying, somali women perfume with pressurized air in the cabin makes you want to pasS out. Some college white kids excited to go volunteer somewhere in Kisumu, and want to tell you with their bright eyed enthusiasm of how they are excited to change lifes in 3 months , bravo! A bored non profit Finance /auditor going to kenya to make sure the project finances are following good internal controls and making sure his mother company passeS Uniform Guidance audit to ensure another round of Fed funds and want to tell you all about their work saving some social stuff in Kibera , some Kenyan dude with an old white woman drinking like a fish and pretending how she loves Kenya , some Kenyanese girl pretending she does not understand swahili, she is too cool with her iphone on hand, ipad and a movie all at the same time.

A mama from majuu who had visited his son/daughter and so excited to see mtu wa nyubani and she wants to know you , she has been so isolated and bored and so elated to be finally heading nyumbani.

Some WB OR IMF dude boring you with his travels to godforsaken Chad or Benin for some projects lol. To me econmy class , take a sleep pill and blackout till NBO . I do not think is so conducive , again unless one's mission nikutafuta.

Expatriates, - wannabe I made it folks. They all come in shape and sizes and you might be right, some come with a mission of befriending the big kahunas who rule Africa and make son-in-law, that she might get lucky. They are the modern trophy husband- daddy would be pleased , my daughter has a mzungu husband - she appears she made it.Ati changing the world - errr you have not really interacted with Expats......just saying

Note to self- need to write a book of all the above characters I have met in my journeys out and about.

Your last advice is the most solid one, be yourself in your daily activity, atakuja na akikosa, learn to love yourself and stop looking for someone to define you.

"To me econmy class , take a sleep pill and blackout till NBO." Hahaha, very true.

@formerlyguest2, Maybe maybe not! it is not about me (I could be anything for who cares what), it is about an imaginary folk who has almost everything except love and has not found it in men/women who seemed focused solely on her material influence. Your experiences notwithstanding, you and this Nini lady I guess are not the same person. She is looking for a very rare breed of suitors, so when you shut the door to the world using a "sleeping pill", she will need to be "fully awake" to the world to accomplish the mission of finding her jewel of life. In the hay of those mundane scenarios you paint, there are potential suitors! One needs only catch the right one during "searching period" not a suitor every time they fly. Another thing, having lived a life of luxury, what some of the people may need is familiar but inconvenient exposure to the realities of fellow humans-thus expanding their horizons. That way they have a chance to retrospectively redefine themselves. (Disclaimer: Do not try out my social media advice in real life, its often my alternative comical contribution-take it with a pinch of salt for another day cheers!)

Of course, I understand, I was just trying to put humor to what I consider humorous article IMHO of a woman whose only problem is finding a good suitor in a country where myriad of problem exist and maybe she should channel the energies to alleviating those with her influence.

And yes Melatonin for 8 hrs ride works miraculously and no jet lag thereafter it is a sleeping pill with no quotes :-)

Cool. On melatonin, someone I once trusted told me when she used to take it she woke up irritated and high volumes would hit her raw nerves. Is this a common occurrence with the pill?

Maybe she didn't use it as intended ; high doses,or she may have other underlying issues etc. Its not intended for fequent use either - only when your normal sleep pattern may be interrupted by travel or other things.

Imara, labda yuataka dume sio kijana tu. A woman from her calibre responds to dume as in dominance otherwise she will chew a weak one and spit him out. Namtakia kila la heri, upweke is depressing, more so if one is surrounded by people. Crowded but lonely. Maxiley amenyamaza sana on this topic as is guest1. Wako wapi?

I agree with this woman. Nowadays there are men that has become vultures. I live in US. Met this guy who lives in Kenya. Despite the fact people say a woman should not help a man, I really helped this man financially. Sponsored his passport, visas to different countries including US, airfares etc... Was also helping him to get connections to support his charity organization that was always in debt. Every month for three years I sent him money. When he asked to borrow hundreds thousand from me, I refused to lend. He also wanted I add his name in my properties. Really? For just a boyfriend who haven’t commited? At that moment, everything changed. He stopped calling me those sweet words...hun, baiby, my love etc....

So, we have men out there who are living like prostitutes in a woman pocket. Waste of my time & finances.

Hi Nina
At the age of forty with money most likely you will get joyrider in your wealth not love.
I have so many of your age looking for serious love but end up getting
Lover boys and later put them into problems.
Look for somebody over 50 whom you can partner for live to continue.who can understand your desires but don't expect a man over 40 to be single unless he has wasted himself.
Good luck.

@Maxiley...you are having a laugh! Co-wife in this calibre of a woman?! 'FG2..that economy class breakdown kind of traumatised me and left with a headache as the familiar whiff of Bint- el-Sudan worn by walalos was awoken in my passive memory! The stink...….unfortunately for me, I continue to fly economy and save the coins for my hols or loved ones!

you haven't come out and tell us how you got the 3 children. and at your age with 3 children, may be you get a man who is awidower with grown up children or you become 2nd or 3rd wife