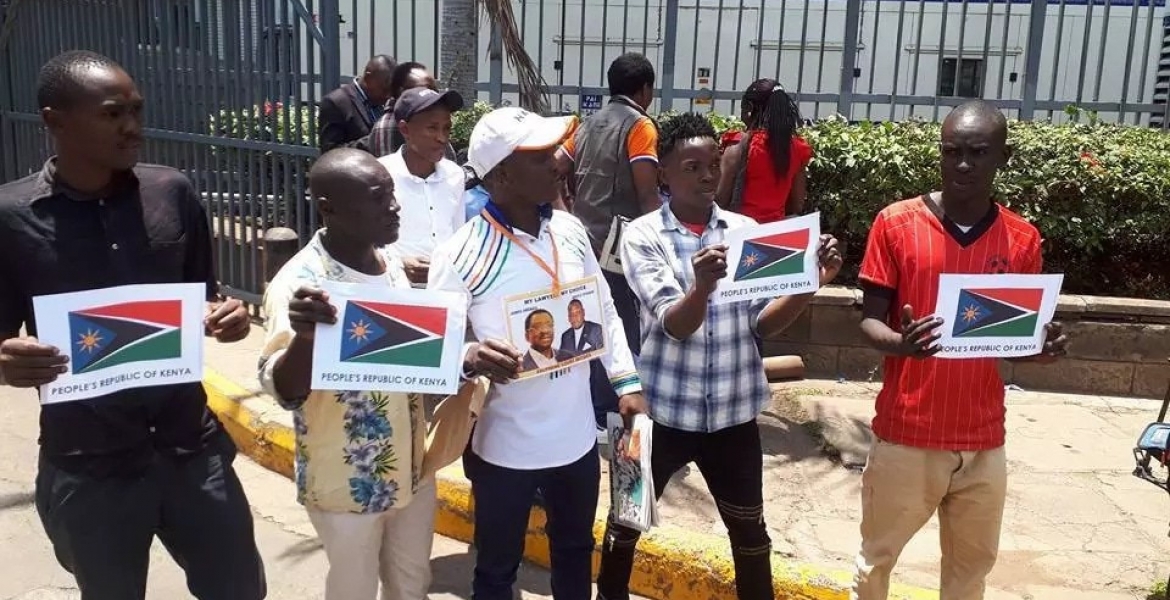 Opposition National Super Alliance (NASA) has revived the secession debate that dominated the headlines shortly after the August 8th elections.

On Monday, the opposition supporters in some parts of the country displayed the "Peoples Republic of Kenya" flag as they staged anti- Independent Electoral and Boundaries Commission (IEBC) protests.

Nasa leader Raila Odinga said the demos will be held twice a week; on Monday and Friday to force a section of officials out of office before the October 26th repeat poll.

In Nairobi, protesters displayed a miniature People’s Republic of Kenya flags as they marched towards IEBC headquarters before they were dispersed by police.

NASA chief strategist, David Ndii had in August ignited secession debate after unveiling a petition of "Self Determination". The debate, however, faded away weeks later.

The protesters seem to have reawakened the debate by unveiling the ‘proposed’ flag for Peoples Republic, which resembles that of Africa's youngest nation, South Sudan.

One person is reported to have lost his live in Siaya. The man passed on out of shock as police lobbed teargas to scatter the rowdy youth.

Woi siwaende haraka sana to that Banana Republic of Kisumu and stone throwing Federation. Wasisahau to go with Babu Owino and all the other NASWA hooligans who lives in Nairobi

Raila using the young and in need of work to do his dirty job. Why didn't he hold those stupid paper flags if he is so dedicated to the cause? He is such a user. Arap Moi needs to deal with Raila again.

Yaani umekaa chini and opened your head and saw you're wise to expose your illiteracy and prematureness here??

And you don’t think this is revolution? Quite absurd indeed. Is this Peoples Republic of Kisumu or People Republic of Kenya flag. I guess Luos are the only Kenyans and everyone else is something to be known. This is treason and nothing less.

Yeah their masters are making sure there is a revolution like that one in Egypt and other places. Uhuru Kenyatta should be careful and security should be alert. This is how a coup happens. This is what Raila has been working hard to do .

This flag resembles the Flag Somalian Al Shabaab want to replace Somalian flag with. This are terrorists in disguise and they should be treated as such. I have always said Raila is a hardcore Communist who want to turn Kenya into a failed Socialist State. He should not be allowed to do that. Raila cannot and should not be allowed to take Kenya into the path of darkness

Secession can be solution to corruption.I support

Lock them up. There is only one flag in Kenya

Just seeking their 15 minutes of fame.

And which of the "two republics" is your baba striving to lead? How can one supposedly lead two "nations"-oxymoronic nature of nasas agenda.

Not too long ago rao was the prime minister of kenya.how quickly he forgets that his fame and wealth came from a united kenya.good leaders do not plant divisive ideas that separate, instead they sow those of uniting people.
I urge fellow kenyans to use their heads,and not follow leaders blindly.just like false prophets, we have false leaders who can lead the bus into the ditch...

SELF DETERMINATION IN THE WORKS! VIVA PEOPL'S REPUBLIC OF KENYA

Avail Migingo to those who want to seceed. Raila can be sworn in there as life president apeleke unjinga wake uko.

This mwakilishi page is too bullish with no courtesy, full of abusive language. This has a lot of dictatorial commands.My bible tells me two cannot walk together unless they agree. There is no voice of reason here. Remember you cannot use constitution and force people... unless Kenya is using undemocratic moves. We have basic freedoms.

why not have all the 42 tribes have each a country then...

Raila has realized he will never be president of Kenya and now wants to curve out a small corner to lead. His followers are the most gullible people on earth so they are going along with the idea.

Not all Kenyans agree with your ideology. The solution is to put the likes together and let them go and start their banana republic as you put it gentlemen,why bother. Surely you have nothing to lose. If one group goes bananas etc it is purely their choice. Give them what they want. Life is made of choices and choices have consequences. Central and Rift Valley and NFD/ Garrisa have nothing to lose. They will continue without hassles.

I support it 100% This will help stop tribalism and corruption in this country viva The peoples Republic Viva Raila viva Babu one day our children will liv to tell the story u call it ujinga but we know its revolution , u call it treason but we know its revolution . you will have Nasa supporters to thank some day . Now continue yapping its allowed. vivaaaaaaa Msando,baby pendo ,Moraa vivaaaa Kenya.

God bless raila for​ That kind of wisdom