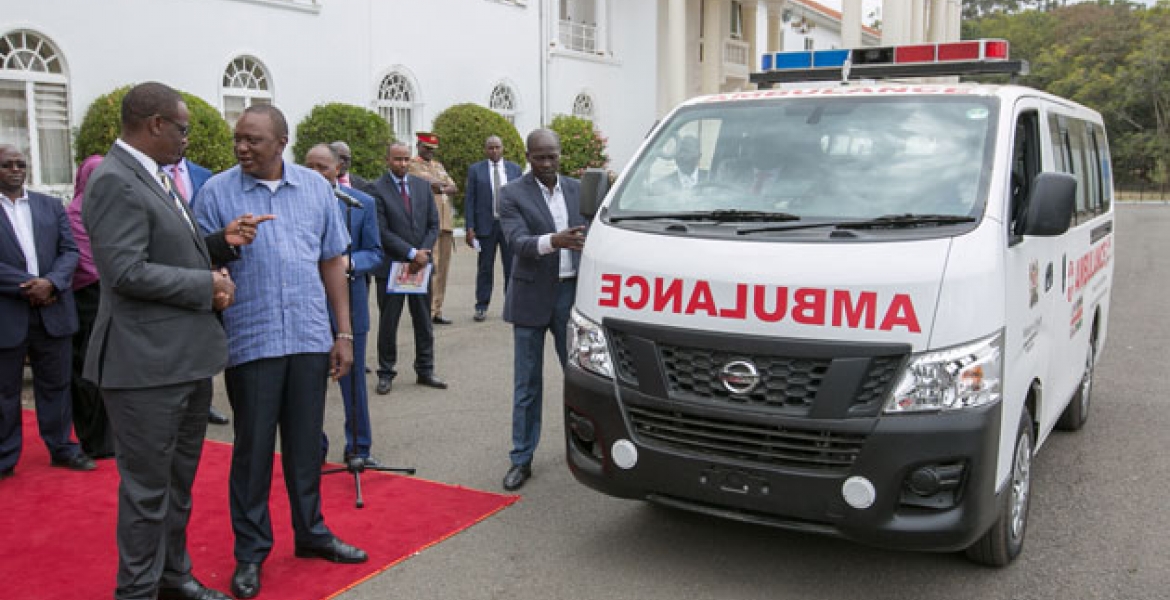 Seven counties have benefited from ambulances that have been purchased by the government from cash recovered from the “Chicken gate” scandal.

President Uhuru Kenyatta Monday issued the seven counties with the ambulances purchased using money recovered from a United Kingdom company, Smith & Ouzman, which was found guilty of bribery to win a ballot materials contract for the 2013 general polls.

The head of state said that the ambulances will help support the health referral system in the seven counties.

“These Ambulances will go a long way in saving lives and enhancing emergency response services in the selected Counties which were in dire need of this support,” said the President.

President Kenyatta said Kenya was working hand in hand with the United Kingdom, Switzerland and Jersey governments on a tripartite agreement-Framework for the Return of Assets from Corruption and Crime in Kenya (FRACCK).

He further added that the proceeds of corruption arising from Chicken gate scandal was a significant achievement by the Government of Kenya and that of United Kingdom in ensuring that corruption does not pay.

I see, you did not give any ambulance to Joho. This is a sign of a corrupt and a vindictive leader!

You have served your one time in office. We have to honor the late Madiba Mandela by demanding that all heads of state in Africa serve only one term and leave office. It is called, "Madiba Mandela presidential term limits." Other people are capable of leading Kenya. It is time to go.

Msema Ukweli. I feel your True Pain for All Kenyans.

There are 7 ambulances and 47 counties, the head of the state can only give so many counties, as far as how many terms to serve, Mr Mandera chose to only serve one term, Kenya constitution allows two terms, so this is a constitutional issue. What one leader chose's to does not constitute the norm. I also do not see the president being vindictive, what about the other, 40 governors?.

Looks like nothing has been done to the players in the chickengate scandal...

I sincerely believe that Africa can contribute a democratic idea that can be emulated by the entire world and keep Mandela's name live for many centuries to come. This can be done by globally proposing the one term presidential limit in honor of him. This man spent 27 years in jail for advocating for freedom for everybody in South Africa.

When I was in Cape Town, South Africa, I took a ferry ride to Robben Island and went to the room where he spent 18 years away from his immediate family members and served only one term in office as the president of his country when won the election in 1994. If a person can do that, why not the rest of Africa and the world?

He instituted the Truth , Just, and Reconciliation Commission which brought together sworn enemies of apartheid and how they could live together in a New South Africa.

Australia and Canada adopted this model and apologized to the indigenous people of the two countries where the indigenous people in their own country were treated as sub humans by the arrogant immigrants from Europe!
Let us not just be copy cats of other people's ideas in the world. Madiba Mandela model of one presidential term limits can be what Africa can present to the world to emulate.

Msema Kweli, good point there. Why cant we be the leaders of shaping democracy,or whatever governmental system that works? Do we have to always wait for mzungu to "perfect" things then we follow. I have said this many time on various issues onthis forum- we do not have to re invent the wheel. We can also independently show the world how do to things better.And when Isay the world I dont mean only somalia,sudan,and afew so called third world countries.

I can elect muuaji Raila to the post of president of the dead leave alone one term president he wants.Killing and Cannibalizing are muuaji Raila's hobbies and he is the most qualified to be the president for the dead of Kenya.

Msema Kweli au Msema Ukweli as @ Guest 1 calls me, will re-appear again after Raila has taken the oath of office as the new - one-term president of Kenya.

Msema kweli I feel u bro but remember mandera failed terribly to black peoples in South Africa.Blacks were fighting heavily for land which he failed n yes failed 100000% terribly to make sure the blacks get their farms back today the blacks r more poorer than when they were ruled by the whites.Thats why a young man called malema is in forefront of asking for the land back to the indigenous black pple.Also I leaved in Australia Melbourne to b specific n the aboriginal pple who r the owners of Australia remain poor n poorer,they were not given the rights to own their land back from the European thieves.They leave in very poor conditions they r into drugs coz mentally the whites made sure they will remain confused??Thats why gikuyu nation is always mad when somebody like rao continues to worship white man knowing how gikuyu suffered those days??

@Mkenya Halisi, remember criminals were shipped to Australia because prisons were crowded in Europe. Those are generations of criminals. They pass their genes to their children

Very true mr Kenya.Can u imagine In Australia if a robber is found on yr roof top u chase him n he falls Breaks his feet he can sue u n u will pay him??Also if u wake up n find a thug inside yr house ur suppose to call the police but if u injure him u go to jail,that's how the laws in Australia stinks as Kenya said its ruled by the same criminals who were brot in this country from Europe.This thugs were rewarded then by their masters on how many heads of aboriginal they bring??So this wazungus r evil very devilish.Same shit which happened to our forefathers during colonialism.