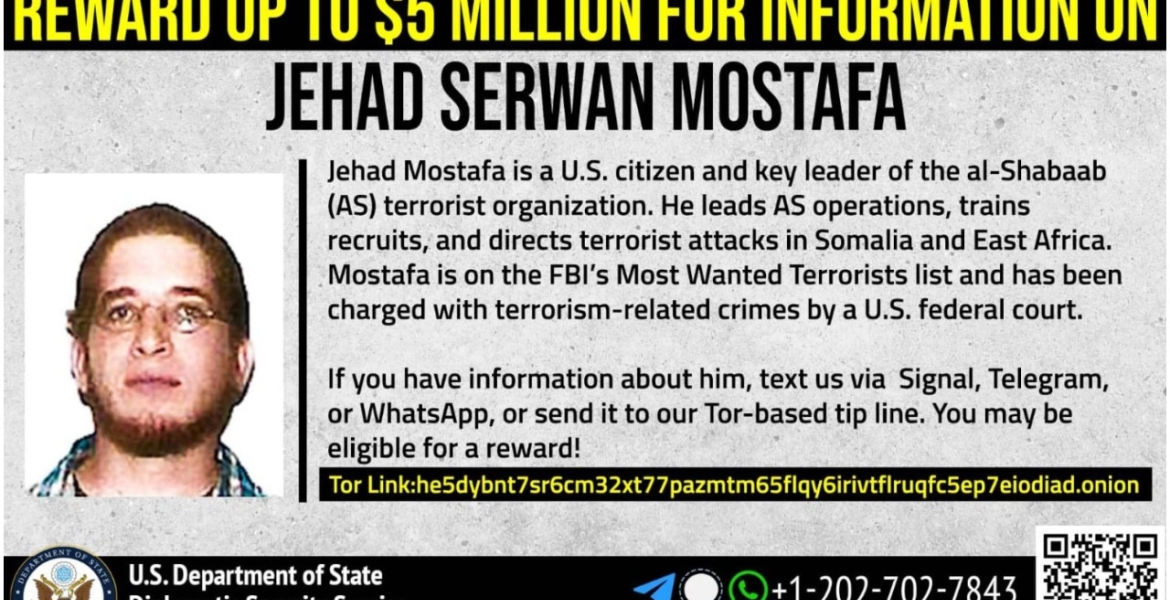 The US government has offered a $5 million (Sh570 million) bounty for information on the whereabouts of Jehad Serwan Mostafa, a key leader of the Somalia-based Al-Shabaab terrorist organization.

Mostafa, alias Ahmed Gurey, is an American citizen who leads Al-Shabaab operations, trains recruits, and directs terrorist attacks in Somalia and East Africa, according to a notice published by the Rewards for Justice program of the US Department of State.

The 41-year-old is on the FBI's Most Wanted Terrorist list and has been charged with terrorism-related crimes by a US federal court.

The US government says Mostafa attended college in San Diego, California, before moving to Somalia in 2005. He is believed to have participated in attacks against Ethiopian forces before joining Al-Shabaab around 2008.

Mostafa is said to be a high-ranking figure in the Al-Qaeda linked jihadist group, serving key roles including as a military instructor at the group’s training camps, leading foreign fighters, operating in the group’s media wing, acting as an intermediary between Al-Shabaab and other terrorist organizations, and leading the group’s use of explosives in terrorist attacks.

US authorities have also linked him to planning operations directed against the Somali government and internationally-backed African Union forces in Somalia and East Africa.

The Rewards for Justice program has appealed to anyone with information on Mostafa’s whereabouts to reach out via Signal, Telegram, or WhatsApp number +1-202-702-7843.

He must be a Republican. We should round up all the white dudes in Somalia and I bet he will be one of them.

His nose 👃 gives him away

Wow, now with that kind of cash in Somalia, the battle is between" betraying Allah"'and missing out on the 72 virgins,and getting the cash and disappearing in Eastleigh and frolicking with non-virgins...

Comrade Maxiley,
Which head do you think will be thinking here??