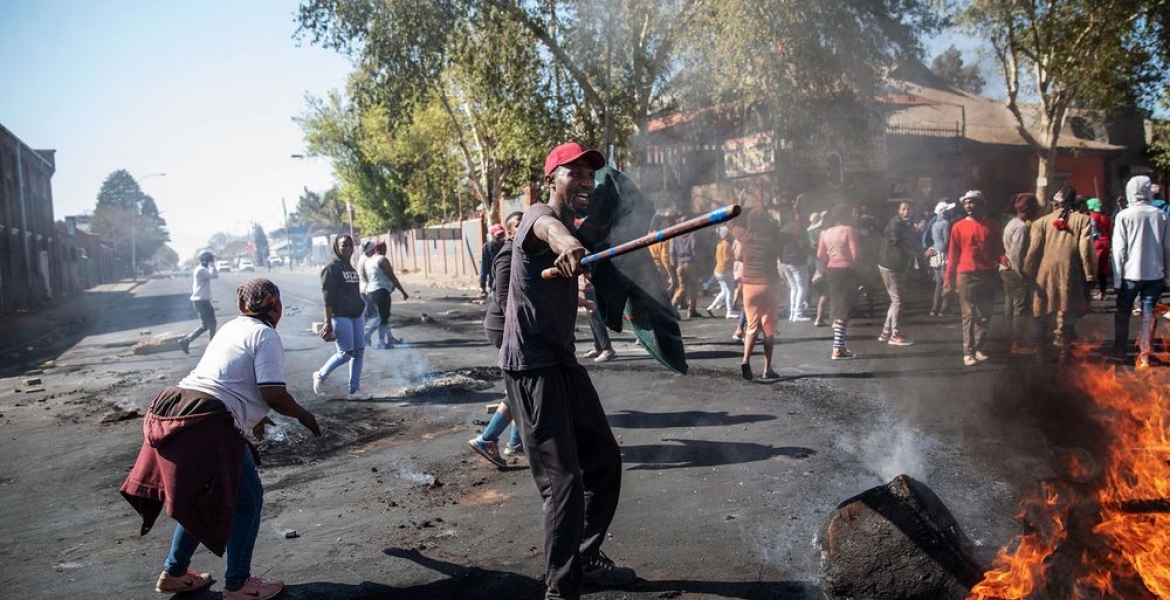 Hundreds of locals were seen running across parts of the South Africa’s commercial hub looting and burning down shops believed to be owned by African immigrants, according to BBC.

The violence reportedly started in Jeppestown, an area near Johannesburg central business district, before spreading to Denver, Malvern, Turffontein, Tembisa and other pockets of the city.

Police officers were forced to fire teargas, rubber bullets and stun grenades in an attempt to stop the looting. The motive behind the fresh wave of attacks remains unclear.

Addressing the media, South Africa police minister Bheki Cele termed the violence as a “criminality rather than xenophobia.”

“Xenophobia is used as an excuse. Nothing… has sparked any form of conflict between the South Africans and foreign nationals,” said Cele.

Southafricans you should repent. God is not happy with you guys. Whatever you are doing stop it. Repent.. Repent. Intercede for you nation.

I condemn the rioting. There is no justification for it whatsoever. I also condemn South Africa and Kenya's open door immigration policy. The ANC government of South Africa has allowed millions of Nigerians to immigrate to South Africa at the expense of locals who have been put out of jobs. Similarly in Kenya the consecutive administrations starting with Moi's have allowed millions of Somalians to immigrate to Kenya through porous Kenyan Somalian border. With Kenya ranked top five in corruption Somalis illegals finds no problem acquiring Kenyan citizenship. In fact, the population of Somalis in Kenya has became so huge that in the next twenty years Somalis will be the biggest ethnic group in Kenya. It is unprecedented rise since 1964 census when they were only three percent of Kenyan population. An average Somalian family produces between ten and eighteen offspring because Somalian culture does not allow birth control. Somalians are also becoming Tutsi's of Kenya with almost all branches of Kenya government nowadays being headed by them, It is such kind of government ineptitude that fuels the kind of hate we are witnessing in South Africa. Kenya is a melting pot and soon or later things are bound to erupt

@ koni Hanene. I totally agree with your point that Somalis multiply faster like wildebeests and strive to impose their way of life in a foreign land, and NOT thinking about their country,a beautiful example is the state of Minnesota here in US.
Africans and blacks in particular are not civilizable enough to live the modern life like whites, it’s whether you enslave or colonize them for centuries, what the best they will do is to pass the anger and hate to their offsprings it’s not just to black South Africans who can smash and burn a picture of a dead white man, kill their fellow blacks but they can’t slap the face of a living white,

While I condemn the illegal activities in South Africa I can't help but wonder what your point is "Dagetari!" Wasomali wameingilia wapi? For a whole Doctor if you truly are one, your comments are run-off-the-mill. Totally mediocre. The Somali-Kenya issue is totally different from what we are witnessing in South Africa. They have taken advantage of the Kenyan corrupt systems and chanels, through the same corrupt we vote for based solely on tribal affiliation and selfishness and that's how the Somalis easily make it to the top. It is DISGUSTING to say the least when people, Black people like you and me were compared to animals and probably still do, looked down upon and still discriminated based on how we have our children. They use the same sentiments to describe black people- them white nationalists and Nazis. "Ati wanazaa bila plan" So I PUT IT TO YOU that YOU NEVER EVER MAKE STEREOTYPES ABOUT A POPULATION BASED ON HOW MANY CHILDREN THEY CHOOSE TO HAVE! How many children have you Bred? How many have you pushed or how much sperm have you mwagad if you're a man? Watu mko majuu, always looking to be treated fairly by the natives in those countries but YOU NEVER TREAT THE ONES YOU HAVE HOME WITH DIGNITY. NO MATTER WHAT SOMALIS GAVE DONE TO US, THEY STILL NEED TO BE TREATED WITH DIGNITY! Everyone has hopes for a better life in a foreign land and that doesn't exclude Somalis. We have Kenyans vying for political seats all over the world and everyone encourages them. Apart from you Fake Doctor Koni BECAUSE IN A RECENT POST YOURS WAS THE ONLY NEGATIVE COMMENT ON THE STORY ABOUT a young Kenyan woman vying for a seat in Georgia. Your comments today were very derogatory to the Somali community and very inciting. You better go back to school Doctor. Or go back to the village you came from and stick there with that kinda reasoning. Nkt. Kwani wewe umezaa wangapi? Mama yako alizaa wangapi. Dagitari go wash your mouth

Dr Hanene that's a big lie stating in 20 yrs somalis will b majority unless every tribe in kenya wote wakatae kazaa then i can go with you about population.1m kenyans r born every years n 850,000 r from indigenous kenyans mainly luhyas,kikuyus,luos so u got the wrong number.For me i only insist that as anybody thinks of calling any country home where u were not born always have a plan B incase shit happens.We have seen trump deporting or making it hard for immigrants in states that's the same shit happening in south africa thou in south african they r using bad force.I will continue encouraging pple to make money invest in yr country n one day go back b4 shit happens.

Have you wondered why the Kyuk wazees and Wamuchomba are advocating for single women to be married as second wives? Why are they uncomfortable with ladies having one and only kid?
@Mhalisi, census numbers kando, city center, who is owning 80% of mid-class and above restaurants? What about gas station ...almost 90%..... Misikiti; hata Wangige, Zimmerman..name it... Zubaa zubaa utakuta Kenya sio yetu... Gucia aerial...

Things happens in weird way and right now the wind is on Somalian side. Somalians are taking over all Kenyan Indian owned business and are literally treated by Kenyans as the third superior race after white and Indian, a mentality that is there by design. it is only a matter of time before Kenyans elect the first Somalian President and a Somalian controlled parliament. A Kenyan Somalian controlled government will likely form a federation With its fellow Somalian government to form a Greater Somalia federation with Kenya being a province of it. Arguments advanced to create such Union will be to counter Ethiopians threats and erase all boundary disputes between the two provinces. Those who think this is a joke should look closely at the events taking place. Kenya is close to becoming a land locked country thanks to a marine boundary dispute between it and Somalia. The outcome of that despite depends on who wins the case currently in World Court in Hague between the two countries. Tanzania is backing Somalia in the despite. You are a Kenyan now but most likely your children children will be Luo Somalians, Kikuyu Somalians, Kalenjin Somalians or Luhya Somalian just as today there a Tanzanian Masai and a Kenyan Masai, a Ugandan Luo and a Kenyan Luo. There don't have to be a war for Kenya to cease to exist. Corruption, bad policies and lack of patriotism are all ingredients that can contribute to that and Kenya has them. The former Soviet Union ceased to exist without a single bullet fired even though it had thousands of nuclear weapons and thousands times powerful than Kenya

"...There don't have to be a war for Kenya to cease to exist. Corruption, bad policies and lack of patriotism are all ingredients that can contribute to that and Kenya has them....."

This is comment is like verbal diarrhea. Very runny and can't stick to anything. Stop inciting Kenyans and be at the fore-front to vouch for and elect leaders not affiliated to your community. Comments like this spark hatred and discrimination of immigrants. You sit there and type this garbage and pour more gasoline into the fire. Start using your platform in advocating for equality, peace and contentment. Wewe uko majuu na unajiendeleza lakini hutaki mwenzio ambaye ako kwenu ajiendeleze? There are so many ways of empowering Kenyans and promoting patriotism than this kind of incitement. Stop being an alarmist!

Wapo, I usually don’t respond to comments that attacks my integrity but I find you to be too naïve to warrant a response. Nobody here is attacking Somalians per say. What everyone is attacking is bad policies and ineptitude of the governments that have led to things like xenophobic in South Africa. What everyone is saying is that Kenya need to learn a lesson from what is happening in South Africa in order to avoid similar things from happening in Kenya. No country can afford to have an open border and still sustain its development. Both US and Russia can’t and are two of the World’s biggest countries. When Kenya or South Africa opens its boundary to everyone who want to enter the person who ultimately suffers is the common person whose job is taken by the new immigrant-not the policy makers. Somalians influx to Kenya is something of great concern and especially because Kenyans and Somalia’s don’t share the same value. Somalian don’t consider themselves as Africans, they consider themselves as Arabs and even have a derogatory names for black African-Kaffir or hard hair people. They also consider themselves superior to Africans. As a bright person pointed out in this forum Somalians never want to change, they like changing others. They are populating Kenya with mosques at such high rate that in every corner of the country there are new mosques been build. Kenya will soon have more mosques than Saudi Arabia or Iran. I admire them(Somalians) especially in their commitment to their religion of Islam but I am also knowledgeable enough to know we are different people and its inevitable for a conflict to occur one day. About four hundred years ago a group of Tanzanians immigrated to Central Somalia in pursuit of a better life and today are the most discriminated black people in the World. Even though they are Somalians in every way they still cannot be allowed to intermarry with their superior race of indigenous Somalians. How many Somalians women have you seen married to a black African? Probably non. Somalian women get disowned or killed if they marry a black African. Saudi Arabia banned slavery in 1964 and Somalia has always been its admirer. So Mr. Wapo, and I suspect you are a Somalian, learn your history. If you are such Pan-Africanism person as you claim to be, tell Somalia to stop claiming Kenya's land