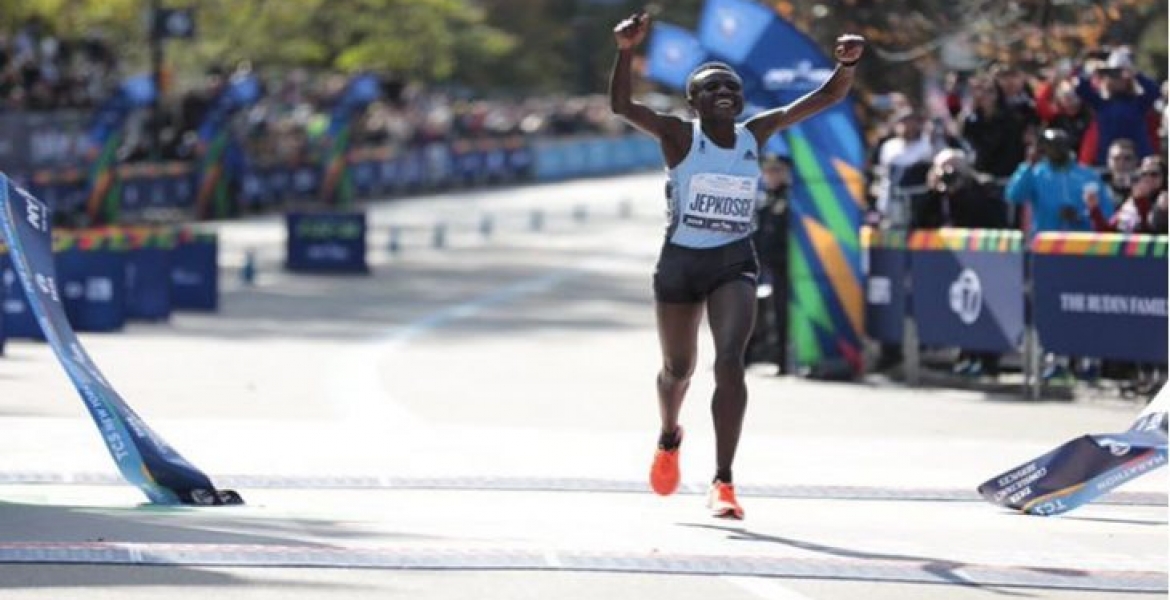 25-year-old Jepkosgei won the women’s race after crossing the finish line in 2 hours 22 minutes 38 seconds, becoming the youngest winner since 2001. Her victory came eight months after she won the United New York City Half Marathon.

Last year’s champion Mary Keitany of Kenya came in second at 2:23:32 while Ruti Aga of Ethiopia settled for bronze in 2:25:51.

In second was Kenyan Albert Korir who crossed the line in 2:08:36 while Girma Bekele Gebre of Ethiopia was third 2:08:38.

On WhatsApp, Albert Musasia in Houston, TX has just dared me for a Marathon brawl on Mwakilishi. Bring it on Albert Musasia!!! and get some thrashing you will never forget for the rest of you life.

Congratulation to Kamwaror,and Jepkosgei.So far this has been a very good year for Kenyan athletes,especially the marathon runners.
I believe what separates these great athletes from the rest is the work ethic,and discipline.They simply work hard.
For those who find the going hard,try the short cut,which usually end their carriers,or set them back drastically. One of the common "short cut" is doping. In resent years, there has been a plethora of Kenyan athletes cause is doping scandals.This tarnishes the image of those who run clean through talent and hard work.
There is already rumors that Brigid Kosgei the Newly minted world champion missed 3 doping test.From what I read, her coach confirmed 2,and the explanations are valid.To be clear, Kosgei has not been accused of doping.But just like Beautice Chepkoech was rumored to have doped just because she had broken the3000m SC that was help by aformer Kenyan Ruth Jebet who had doped,detractors stretched these accusations without proof,to extend to Chepkoech.And here again.She also has never doped.
Iwould urge those Kenyan Sports Authorities to take doping violations very seriously,for obvious reasons.
We should criminalize doping. They tarnish the good name clean runners have worked to hard to build,they cheat,and worse,they steal when they awarded prized that should have go to clean runners,or sports persons.
My mention of doping here should not in anyway be construed to mean that I insinuate that these two brilliant athletes,Kamworor,and Josline are dopers,but to highlight how their good names might be dragged in some scandals by some haters,just because some marathoners of repute from Kenya have been found to dope.That's all.Agood name is hard to buit,and easy to destroy. Lets protect our good name.

You got to love these WINNERS!!!! It feels great to wake up to this kind of news#TeamMursik! flying the flag higher and higher; If you don't like winners then there is probability wee ni MGANGA!Kama unajua;Unajua!!!