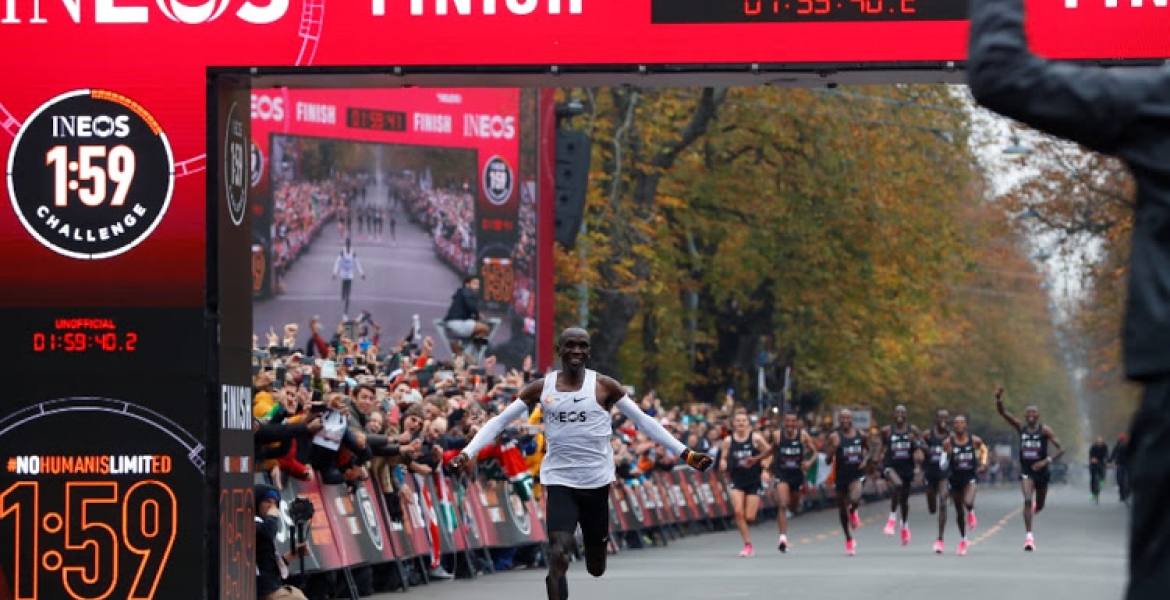 President Kenyatta led the world in lauding Kenya’s Eliud Kipchoge for making history as the first athlete to complete a marathon in less than two hours.

The 34-year-old Olympic Champion finished the 42km race in one hour 59 minutes 40 seconds in the INEOS 1:59 Challenge in Vienna, Austria on Saturday.

Kenyatta described Kipchoge’s victory as a proud moment for Kenya, adding that he has set precedence for future generations.

“Hearty congratulations Eliud. You’ve done it, my brother, you’ve made history and made Kenya super proud while at it. Your win today, against all odds, will inspire tens of future generations to dream big and to aspire for greatness. We celebrate you and wish you God’s blessings,” Kenyatta said.

Ahead of the Saturday race, Uhuru personally phoned Kipchoge to wish him success.
“ I am feeling confident, you are in our prayers… we are praying for you that you will be successful but for us, it is not the success it is the effort that you put in….. Remember you have 46 million of us behind you. Nitakupigia ukimaliza,” said Kenyatta during the phone call.

British billionaire and owner of Ineos Company, Jim Ratcliffe, who sponsored the challenge, said: “That last kilometer where he actually accelerated and came through on his own was just superhuman. I can’t believe he did it.”

Deputy President William Ruto, who flew to Vienna to support the athlete and witness the historic moment, also congratulated Kipchoge for the victory.

“Your supreme tempo, fatigue-resistance, endurance, compulsion, mental strength, resolve, and tenacity are a manifestation there are no limits when you believe in yourself; undoubtedly the landmark triumph cements Kenya’s position in the globe as an athletics powerhouse,” Ruto tweeted.

On his part, Orange Democratic Movement (ODM) leader Raila Odinga tweeted: “This is the stuff of history @EliudKipchoge. You captured the imagination of the whole world before this great feat and it will continue for a long time. Congratulations on becoming the first human to run a sub-2-hour marathon. 🇰🇪 is greater because of you!”

The victory further confirms Kipchoge’s status as the greatest marathoner of all time.

Had to stay up for this ! You made us proud Kipchoge, " No human is limited ". What a race , it was FANTASTIC! Proudly Kenyan!

He could have done this in Kenya if Uhuru cared about sports. It took a white man to think this up and make arrangements while all the Kenya government could do as usual is wait for others success and congratulate like they played any part.

Uhuru is a politician and he holds a political post. No way to separate this from politics.

The article was about celebrating Kipchoge. If you have issues with Uhuru , write to him directly. I chose to celebrate this article to what it was !

GUEST 13, I AGREE TOTALLY, HERE'S MY TAKE. Ruto steals instead of building stuff in kenya then flies out to go waste time to jog in other cities. These people don't invest in kenya/kenyans it took a foreigner to understand Kipchoges talent and put up money then the most corrupt politician flies out to go jog while he's stolen all the money and mashamba in kenya including a kid's play ground in Langata to buld a hotel. there's people are too much, this govt is in the business of congratulating instead of helping citizens.