Kenyan Athlete Awarded $15,000 after Giving Up on Winning Marathon to Rescue Collapsed Rival 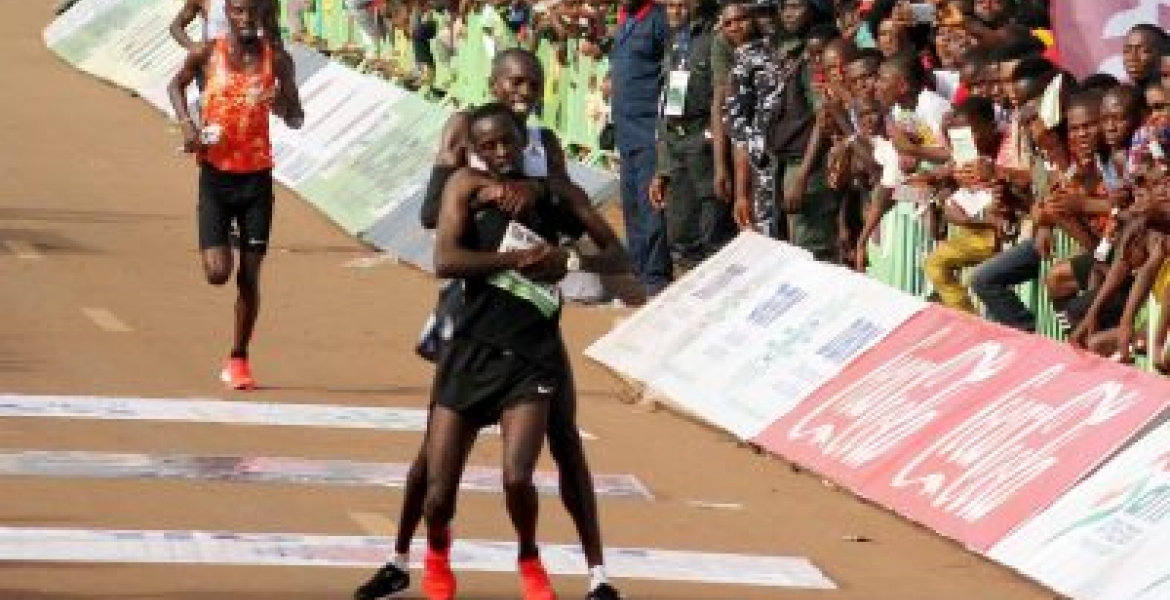 A Kenyan athlete has been rewarded for his rare gesture towards a collapsing competitor during the 2019 edition of the IAAF Silver Label Okpekpe International 10-kilometer race in Nigeria.

Simon Cheprot was fighting to finish first in the race but he stopped to help his compatriot Kenneth Kipkemoi, who collapsed a few meters from the finish line. In the process, Cheprot lost the race, but he does not regret the loss.

“Running is not war; running brings peace, unity, and friendship."

"My dad told me one day, ‘When you’re walking and you meet a sick person on the road, help him; do not leave him’, so that was the first thing that came to my mind when I saw my friend on the ground," Cheprot said after the race.

Although he lost, Cheprot was awarded more than Sh1 million by former Edo State Governor Adams Oshiomole and Deputy Governor of the state, Philip Shaibu for being a "brother's keeper."

Cheprot was the 2016 Okpekpe Race champion and finished second in 2018.

“Simon (Cheprot) may not have fulfilled his ambition of becoming the first athlete (man or woman) to win two Okpekpe titles since 2013 when we began this race, but he came to Okpekpe this year, ran and left as the hero. He did not win any medals but he won hearts.

"While running, his colleague collapsed and on instinct, Simon picked him up; held tight to him and lifted him. That ended his race. But he saved a life. In 2016, Simon came first at Okpekpe; was second last year. Now, in 2019, he won HEARTS: One of our partners gave him $2,000, former Edo state governor, Adams Oshiomole added $3,000 before Edo state’s deputy Governor, Philip Shaibu increased the reward from $5000 to $10,000 with an additional $5000. But most of all, everybody hailed his “brother’s keeper” attitude."

"This is what is called sportsmanship. Simon gave proper consideration for fairness, ethics, respect, and a sense of fellowship with his competitors. He is our hero, he is the hero of the seventh edition of the race,’ said Mike Itemuagbor, promoter of the event.

What a great lesson from our fellow Kenyan especially at this time. A time when Kenyan society has become a man eat man, everyone for themselves and God for us all. Being a brothers keeper been shunned and a majority look for who to ostracize next including the gay community. Who in their right mind thinks this is a western habit? And those quick to judge are reading from the bible brought on by the same white people who used the same verses to colonize and enslave us, singing hymns in church composed by the same white people and after church they go to eat pizzas and hamburgers. What an irony! Thank you Cheprot for showing us we can be better human beings.

Mugikuyu stop opposing the gospel. Suppressing the truth to justify the evil of same sex marriage which is abomination of the highest order using the white man.The colonizer and the missionary are two different people. Cry for your heart and destiny. You know very little. Sick wisdom. The fear of God is the beginning of Wisdom.

My friend Setfree, being gay is not an “abomination of the highest order.” We do not see that anywhere in the Bible, not a single verse puts homosexuality as a higher sin than any other. A Biblical truth, however, is how utterly wicked each and every human is, without God. A gay man without God is not worse off than a straight man with a porn addiction. They are no further from God than a God fearing man who cheats on his wife. They are no different than the Pharisees who sought to stone an adulterous woman, whom Jesus saved, redeemed and forgave, while rebuking those overly zealous hypocrites for judging another’s sins without looking at their own. So please take another look at the Bible and re-evaluate your beliefs before rebuking someone on something you clearly have a skewed perspective on.

A rare Kenyan jewell. I am very, Very, VERY happy for him.😂😂😂

Wow, only if Kenyans would emulate this. He needs a “Gofundme”

Let’s rephrase that to, “wow, if all HUMANS would emulate this. He needs a “Gofundme.”

@ken motley r u one of those diaspora who have misusing or taking advantage of Gofundme??U know diaspora r very good in ex doing money collections to send the dead back home n after bin given lots of $$$ they end up gong under n burrying the dead secretly in diaspora or some collect money at pre-weddings to do weddings at diaspora then after collecting lots of $$$ they end up flying home to do weddings juu ni cheaper n they end up keeping the rest.So when we talk about corruption in kenya let's remember the same iko majuu.So No Gofundme.But that's what extremely human whatever the runner did.

@Mkenyahalisi, Leo umeongea ukweli tupu. These fundraisings are a menace and mostly are meant to fleece people.

Now lets see what Kenyans can do for their own.I commend the Naijas who have shown support for marathon in their country,and for showing true brotherhood by rewarding the Kenyan athlete for his unselfish act of kindness. I say this mindful that some Nigerian writer and Iam sure afew others are unhappy that East africans are "carting"away all the marathon rewards.The writer suggests that since Nigeria has no pray in winning marathons, they should divert these funds to nurturing sprint athletes where they have a change of medaling .What the writer fails to understand is that marathon is unlike a track and field sporting event. Its an event on its own.Look at Berlin London, Noweyork, Boston, Paris, Chicago, Frankfurt,Dubai, LA marathons,they are all in fogeign lands,and are usually wont by east africans.And each time an east african wins, its celebrated in all of africa. Writers there dont complain,at least not loudly.Where ever marathons are help, there is usually apositive economic impact. Naijas can still nurture their sprint runners as they have been doing before the inception of marathon in their country.They cannt blame marathon for their poor performance in recent years.We welcome their marathon runners to Iten for training so that they too many have a chance of "carting" prize money to OKpeKpe.

Very rare for a Kenyan to give up his personal ambitions to help a struggling friend. In our hearts Simon Cheprot is the WINNER and congratulations to him

I salute Simon. What a hero? Proud of you, Simon my Kenyan brother!

Congratulations are in order but how did he save his life? Must be a poorly organized race. There is supposed to be paramedics and first aiders all along the race course. Unless you are trained and qualified to give first aid you are advised not to because you could end up hurting the injured person. But this coming from a Kenyan is well understood since we have become a man eat man society, everyone for himself, God for all of us.

Well done young man. I hope young and old all learn from this young man. Help your brother first before trophies and dollars. Look - he got rewarded handsomely for his unselfish act.
Be blessed and you will win many more marathons.

Something I did not get - was the collapsed runner on his way to winning the race?

This touches my heart. Several years ago I was approaching the finish line of a marathon in Phoenix Arizona when I collapsed with a few hundred meters to go. A runner stopped and picked me up and I was able to finish. I've never forgotten that kind gesture.

Congrats and God shall reward you more.

Reading this from belfast ireland, inspiring gesture from that runner well done