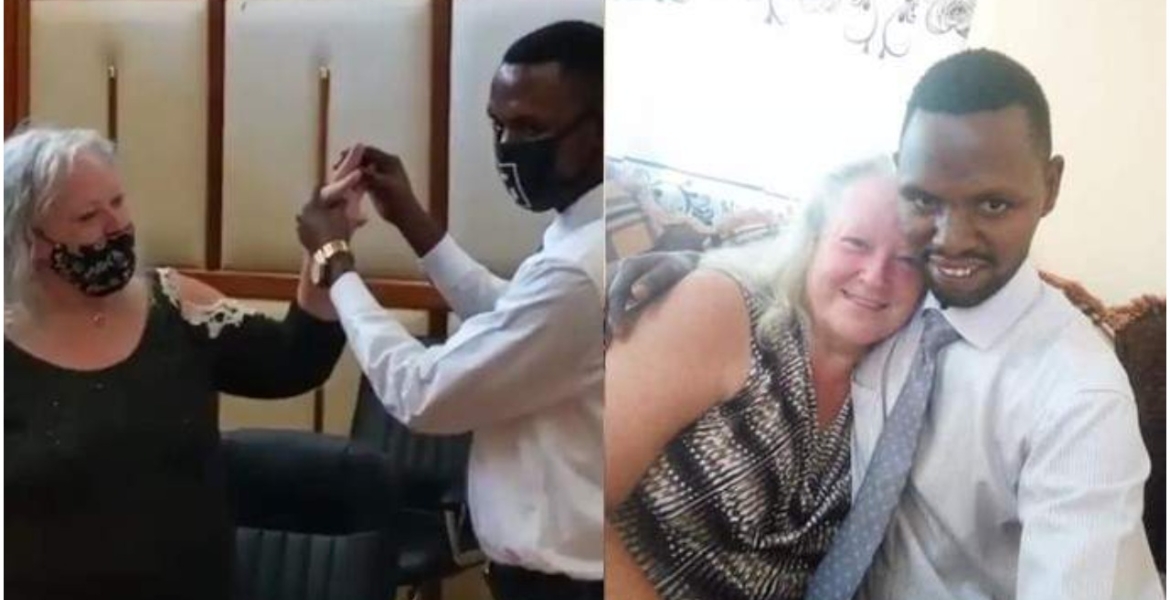 A Kenyan man who is married to an elderly American woman who is twice his age says he paid only Sh100 as her pride price.

35-year-old Bernard Musyoki from Kitui County met his wife Deborah, 70, on Facebook four years ago and the two are now happily married.

In a recent interview with a local publication, Musyoki said he genuinely loves Deborah and does not regret marrying her.

“I sent her a friend request, after a week, I asked her to marry me and she accepted. We even exchanged vows inbox,” Musyoki said.

The man planned to travel to the US in 2018 to meet Deborah but the American embassy in Nairobi denied him a visa.

The two remained in communication for over two years until December 29th, 2020, when Deborah flew to Kenya to meet her boyfriend.

Given that Deborah lost her parents years ago, Musyoki says he had to negotiate for dowry payment with her and her children.

“They said they wanted only Sh100 and told me to take it to church as an offering and she said that’s my dowry,” he said.

Although Deborah’s children are older than him, Musyoki says they relate well. They accepted him and supported their relationship.

Most hilarious. He got 99pc off. A Great black Friday discount. All the best Mr Musyoki.

I must say Deborah looks good for a 70 year young woman. She’s probably retired and getting that social security check maybe 401k on deck. These baby boomers are lonely and needs some loving. Musyoki Get hi greencard and Deborah get her young meat.

Ata kama ni Makaro.
He he he hehehhehheh.

We go to a great length

DESPERATE times calls for desperate measures.
IT'S his way out of poverty and an Avenue to get to USA.

I wish the couple a happy marriage. True love should be cherished and celebrated.

You must be 87 years old @mumbi! Certainly you are really blind yourself! The rules don’t apply here! Wacha upuzi! Kweli hii ujinga ni Mbaya! You are really not together upstairs if you think this is love!

Hundred shillings is about right,the depreciation rate is right on the money. Anyway if it were the other way round would it even be worth the ink for the article?
We have old mamas in Kenya,even wazungus,why go that far.
Call me old fashion,but Iam still leery of online,facebook,or any social media meeting markets. I guess it is one of the way people meet nowdays.

What a choice of a wife. Really Musyoka? Kweli!

What if roles were reversed? No one would bat an eye. Acha jamaa ajienjoy.

Musyoki's mother has blessed this union. Who are we to judge? In Kikuyu we say "The heart eats what it wants".

Woe unto our Kenyan brother the day he decides to leave this woman. Hell hath no fury like a scorned white woman. She will file a petition alleging that he married her to circumvent immigration laws and when ICE comes for him, they will haul him out of his house in whatever state of attire he will be in.