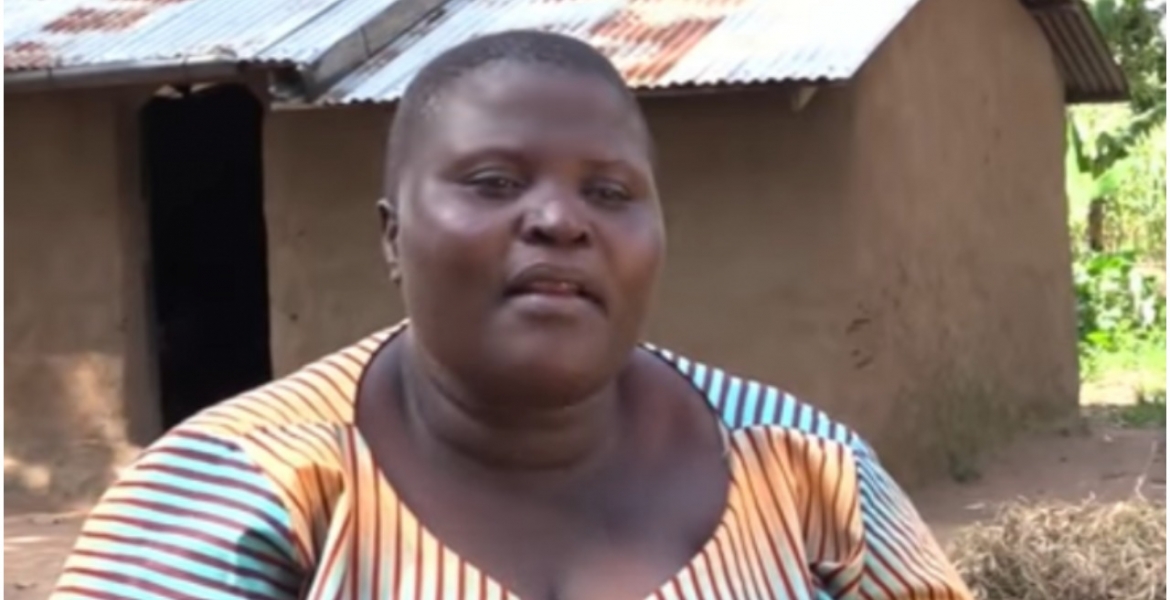 A 30-year-old woman in Kakamega is in distress over her husband’s refusal to take up family planning.

Gentrix Wekesa, who is expecting her 11th child, says her husband has strongly objected to her bid to use family planning methods and wants to have at least 22 children.

“I give birth to these children each year. As soon as my period starts, I get another child,” Gentrix said during an interview on a local TV station.

The mother of 10 disclosed that her youngest child is less than a year old and is expecting her 11th in a few months. Being the family’s sole breadwinner, Gentrix says the burden of providing food for her kids and husband is taking a toll on her.

Like many men among the Bunyala sub-tribe of the Luhya Community, Gentrix’s husband Anthony Wekesa warned her against using any form of contraceptives.

Wekesa believes family planning is a foreign concept that subjects one to ridicule in the community. For him and other Bunyala tribesmen, the more children you have, the more permanent your seat among men.

Gentrix said her husband became violent after she once sought the help of a nurse and got a contraceptive.

“My husband wants 22 children when we went to the nursing home, he told the nurses to stay away from people’s wives,” Gentrix said.

The husband should now act like a man and feed the children he has worked hard for!

I guess he is looking for 2 SOCCER Teams; INGWE and SIMBA FCs.

Guest1,i thought we dont have mixed teams in Kenya...

We will have one mixed team under his name to play against man United!

I will let my COMRADES comment on this.
But from what I read on standard newspaper...the husband thinks that the more children he has the better his will be in later years... THIS IS BS.
AS PARENTS, WE TRY TO GIVE OUR CHILDREN THE BEST LIFE... KNOWING THAT A PARENT'S JOY IS WHEN THEY ARE INDEPENDENT... PERIOD.
THIS IS OUR A CASE OF PARENTING NOT KNOWING.
I TOLD MY KIDS ONE THING, I WILL GIVE THEM PLAN B...PLAN A IS WHAT THEY WANT TO DO IN THEIR LIVES...BUT IF SH*T HITS THE ROOF, THEY WILL HAVE DADDY'S PLAN A THROUGH EDUCATION.

Iam happy to tell folks that the husband's opinion is not shared by many luyhas,or for that matter Kenyans. To start with, what exactly is his point in having many kids. Already he is compromising their future.Some have already dropped out of school.Worse, the burden of family upkeep solely falls on the woman.I would pay for the man to have a baby planted in his belly ,and have him carry it for nine months...and see if he would enjoy getting pregnant every year.
I have no problem if a man can take care of 20 kids he sires,but this man is creating a problem not only for himself,but for society.
And its even ridiculous for this husband to ridicule birth control as western lifestyle.It amazes me how people cherry pick what they see benefiting them from the west,but condemn anything that might challenge their retrogressive customs.The west have abetter standard of living partly because families have fewer kids.

Luhya girls being sent to India- not for studies but brothels. Luhya girls off to Saudi Arabia to be house slaves. Luhya woman being forced to give birth every year and provide for the kids and husband. This is concerning to say the least. Something has got to give!

That is the Murembe nation for you! Look at how that little lostformer mp Namwamba sleeps around with relatives and every other woman in Kakamega!

@Imara you can tell it to the birds these people do not care. As one gets poorer and poorer downtime becomes longer and the only form of entertainment is one.

This woman need to be empowered, her body her choice and the the welfare for the children. Why should she be feeding the husband?

@ Kithoi, why is she going on along,risking her life.Yes her body ,her choice,hopefully includes her mind.Which I hope is not enslaved in this modern Kenya.

She may not feel empowered or that she has a choice. The fact that she has this football team of children limits her choices and her way forward substantially. Having a violent deadbeat for a husband just makes it worse. What I don't understand is why she doesn't get her tubal ligation. Akimkataa bwana yake wiki chache baada ya kuzaa mtoto wake, he may be none the wiser to her surgery.

@ Mundumugo,but these troubles did not start yesterday. How many times or how long do you have to be burned by fire to know that its dangerous for your livelihood.

@ Kithoi, why is she going on along,risking her life.Yes her body ,her choice,hopefully includes her mind.Which I hope is not enslaved in this modern Kenya.

Fool, u did not marry a rabbit n who the fuck is goin to feed all this kids

The husband doesn't like "western culture" when it comes to contraception, yet he goes to a modern hospital, wears western clothes, listens to western transistor radio and even football is a western sport!

This man thinks he's gonna have status with 22 impoverished,malnourished, under-educated kids? Please! And on top of all that, he's not even the breadwinner in the house, the overly and constantly gestational woman is. The oldest kids are already getting ground up in the poverty and servitude trap. Sad situation. He is not even lifting a finger to give them a boost in climbing the economic ladder. Useless.

Do they understand how a woman's body gets weekend during pregnancy in such areas as immune system, bones and ligaments? This poor woman will fall apart and have a very short life span.