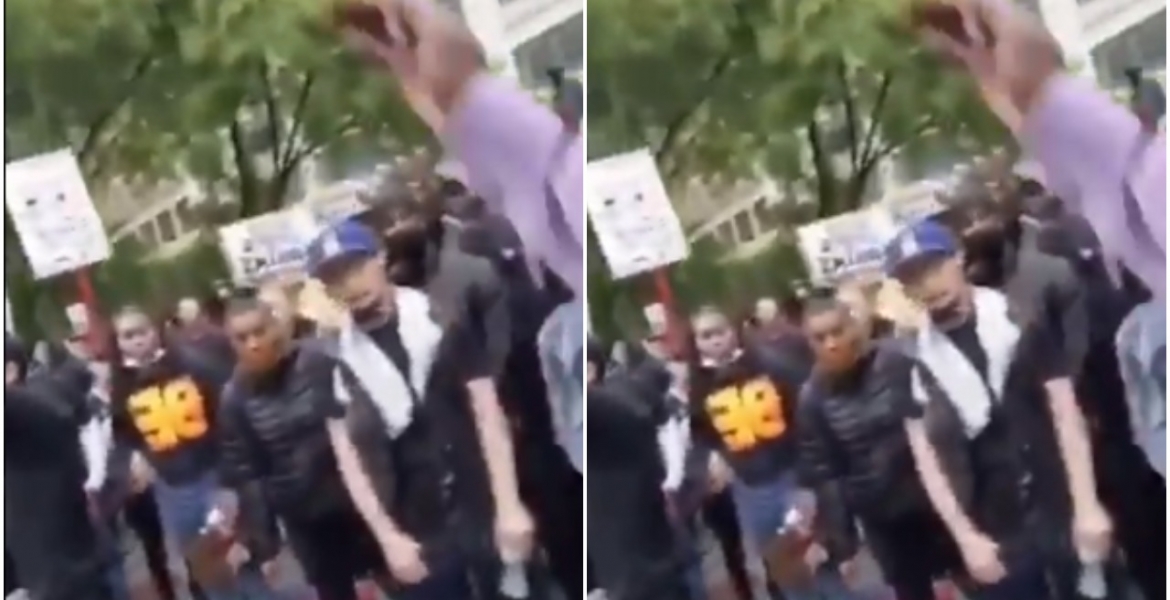 Protesters are taking to the streets in various US cities to express anger over the killing of an unarmed civilian, George Floyd in Minneapolis, Minnesota early this week.

Floyd, a black American man, died on Monday in Minneapolis after a police officer put his knee on his neck for nearly 10 minutes in an incident captured on camera.

The officer, Derek Chauvin, was arrested on Friday and charged with third-degree murder but this has done little to quell the unrest around the US.

A video showing protestors in the US chanting ‘haki yetu’—a popular Swahili slogan used during demonstrations in Kenya—has emerged on social media.

Kenyans are a rare breed.... 🤔
They have already taken "HAKI YETU!" to Minneapolis - United States of America pic.twitter.com/G4FgdLl6uP

In the clip, a man believed to be a Kenyan national living in the US, is heard telling a group of protestors that in Swahili they say ‘haki yetu’.

The man shouts, "We can say it in Swahili, we say haki yetu." The protestors repeat after him.

Mwakilishi.com could not immediately establish where and when the 24-second video was taken.

Is this not the Susan Kihika who went stealing another woman’s husband where children were involved?

How can she “unite” Kenyans while she has failed to unite her immediate family!?

Please Susan don’t use the “unite” slogan while you have failed to do it in your own household!

The problem with politicians is that they preach things they themselves have failed to do! “The unity” my damn foot!! Stop talking about something so simple that you have failed to achieve!

Kenyans! Waa...let me add my voice to the Freedom fund. I am still terrified of watching that video. Haki Yetu!

You may be living in the land of the free but you are still a foreigner in their eyes. Cross them the wrong way and you will be shouting haki yetu in Kawangware or Mathare. Don't be a fool. Keep your sorry ass safe. You don't crap where you eat.
My two cents worth.

Mwangi it's not in your place to direct what we in the diaspora do. Hold your horses. Let the man demonstrate in the language he understands best. If he is sent back home he will not sleep in your backyard. "Go drying" if I may say it in a language you understand. You have not worn the diaspora shoe so let it not pain you.

Mr Mbuthia, thanks for your advice. That was just my two cents worth. FYI I am in the diasporan and have been here for 44 years.
Also just FYI again, there was this policeman in the 70s who was seconded by the govt for advanced studies here. He participated in a demonstration and the information was sent to Kenya.
That was the end of his Police carrear.
Just saying.

Mwangi, in the diaspora, there is free speech, unlike Kenya where they edit even the newspapers to remove big people names and all politicians have to start their speech with His Excellency.... His Excellency my foot! It should be His Failure... Let them enjoy free speech...

@alex mbuthia.The use of material upstairs to befit your would be cries is a rare phenomena when it comes to mass protests and such.@mwangi is simply saying that you dont cut the hand that feeds you being a foreigner for you will get marked and have you shipped out to your origin humbly.When things cool i bet you watch tantrums that will beseech the"haki yetu".The n....ggas will b arrested n get released into the streets leading a normal life but u immigrant will be regreting your foolishness in kibra.Hope this may help you.uji kichwa ni sumu mbrooo!

Njau, how do you know whether Mbuthia is a citizen or a foreigner? Kiswahili is a language spoken by so many people. Some swahili speakers are Kenyans and others non-Kenyans.

@ex diasporan please read the headline of the text,the body and conclusion to get the answer you are looking for.Its self explanatory if not ask a neighbour for help.

Njau, I don't know which school you went to, the text says "man believed to be Kenyan"... That does not mean he is Kenyan. Plus with dual citizenship, he can be a dual. We have two ears, eyes and one mouth so that we can listen /read more and talk less.

@ex diasporan my english teacher was a little bit gnomic,illustrous of the essence of digesting and synthesizing literature which beats logic how one wont understand the would be literal meaning of "believed to be".Nothing could be further from the truth per the script which remains a tossed coin of this"haki yetu"

I heard he is called Nderitu.