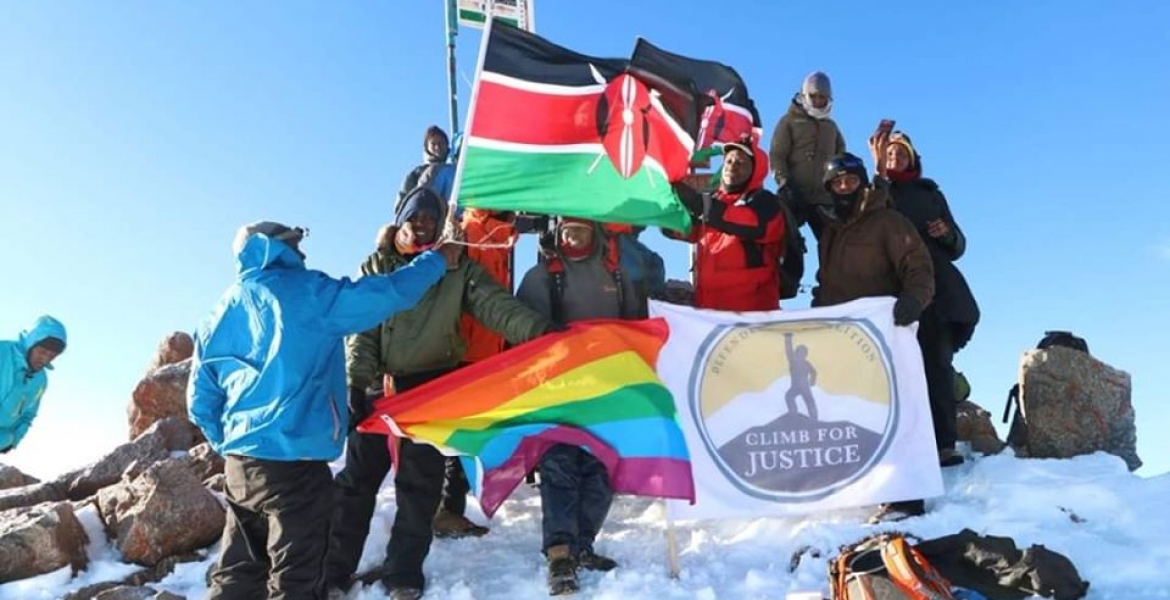 Members of the Kenyan lesbian, gay, bisexual, and transgender (LGBT) community this weekend hoisted a rainbow flag at the peak of Mt. Kenya during an initiative dubbed #ClimbforJustice.

Despite homosexuality being illegal in Kenya, there have been increased cases of members of the LGBT community coming out to publicly express themselves. #ClimbforJustice is an initiative by human rights activists whose aim is to raise funds for the construction of a safe house for Human Rights Defenders (HRDs) in Kenya.

In May this year, High Court judges Roselyne Aburili, Chacha Mwita, and John Mativo declined to decriminalize gay sex in Kenya, ruling that that Section 162 (a) and (c) of Kenya’s Penal Code clearly states that homosexuality is illegal in Kenya. The petitioner; National Gay and Lesbian Human Rights Commission (NGLHRC) had requested the court to repeal these sections of the penal code to make gay sex legal.

The court further dismissed the petitioner's claims that the Kenyan LGBTQ community would continue to be stigmatized if homosexuality remained a criminal offense.

Last week, NGLHRC indicated it will appeal the ruling at the Appeals Court.

This is very courageous and should be commended by all Kenyans. This courage should be emulated by all kenyans as they stand up and fight the evil scourge of corruption here that is destroying the country.

Corruption causes Poverty; Gaysim causes the HIV-AIDS Virus. I would rather die Poor than die HIV/AIDS.

Educate yourself. Love does not cause AIDS.

Dirty love (Anus sex) breeds the HIV virus; the ORIGIN of the virus; then AIDS. I just Educated you for real.

@ Guest 1, what do you say about those heterosexual women who are drilled doing it the"dirty love",and love it,and say that it is also aform of birth control?
I still assume that you are awoman. You should know then,that only 20% or so of women orgasm through penis -vagina intercourse,and just about all men orgasm that way.Therefor penetration does not favor women,and that they find sexual pleasure in otherways that men dont.So you as awoman your concern should not be on penetration,but somewhere else,till time for procreation.
By the way, the origin of HIV is not man mounting another man.Come on, do some research.Try origin being from some animal,may be aprimate to human beings. I dont know how,but I would not rule out someone drilling a monkey.Let the gays enjoy the flag they have mounted.

Sex of any kind can lead to AIDs! Go back to school!

That faggot's flag need to come down ASAP. It's an insult to Kikuyu and Kamba people who believes the Peak of Mt Kenya is a sacred place. It's also an insult to the people of Kenya. The honor and respect of the raising of Kenyan flag at the roof of Mt Kenya is mocked by this assholes. The peak of Mt Kenya is the Mecca of central Kenya people because they believed Ngai the monolithic Supreme God in the spirituality of the Kamba and Kikuyu is creator of the universe and all in it. The Kikuyu and Kamba ancestors regarded it as the omnipotent God and the two communities worshiped facing it. Faggots should not infringe on authentic African culture which has not tolerated homosexuality since the dawn of man

Your hatred of your fellow human beings is very telling. Hatred will eat you from within. Try love.

Anus sex is the one that
eats from within via the HIV virus. Even the Educated gays will tell the UnEducated gays.

You are right. You can call me a hater if you call what I stand against hate. I hate human beings that are corrupt, terrorists, scammers, opportunists and immoral. Most Nigerians are scammers and opportunists for that I detaste them. Most Somalians have terroristic tendencies and are also opportunist. They take advantage of corruption in Kenya to destabilize to illegally immigrate to change the dynamic of the country. Ninety nine percent of Somalian in diaspora never identifies themselves with Kenya even although ninety percent immigrate to other countries through Nairobi and for that I say to Somalians live and let live. Faggots are adornment of evil. Isaiah 5:20-21 says "Woe to those who call evil good, and good evil; who put darkness for light, and light for darkness; who put bitter for sweet, and sweet for bitter! Woe to those who are wise in their own eyes, and prudent in their own sight!". Faggots are calling evil good and good evil and that is not acceptable

Exactly. Sodom and Gomorrah were Sacred until the gays began Running amok. Then God the LORD got Upset. And the Stubborn became Ashes.

How could God who knows everything,or outcome in advance get upset.The time to be aset is when he created them.

Let's wait and see. The mountain will soon respond. One nation of a people loosing power and another nation rising. Age of sword ending, age of spirituality rising.

I would like to suggest that 2020 should the the year Kenyans embrace each other as brothers and sisters, regardless of their sexual orientation. And join hands in fighting corruption, tribalist, unemployment, and all kinds of discrimination,that negatively affects our society.

Mrs. Lot did compromise. And she died in a Hell of Brimstone fire.

Did she fight corruption,and discrimination?

Nonsense do not disturb the wildlife and pollute the flora and fauna who give a rat’s ass about who you are sleeping with.And exactly how did you celebrate conquering the mountain should I even ask .Some people consider the mountain sacred land where the ancestor’s rest do not denigrate it with your devious devilish acts.Even like animals do not sleep with each other

I can’t agree more @ guest#13
I am so proud of this heros. Let pay more attention to sonko and his goons! This gay people have not stolen millions Ksh from tax payers so haterz get a life! Live and let live y’all

Glad I have stopped commenting on Guest1, 2, 3, etc. I sleep much better.

Good!😂 If you ain't got nothing True and Factual to say, don't say it.

Let's watch, " This is the beginning of the end of rule of Babylon the great in Kenya and in Africa" . They have crossed the line. They asking God "Who can bring me down? It's the year 2020.
400 years of slavery. God will!!!

Let them learn from the British and how their influence in Kenya and in Africa came to an end. We are at the beginning of the end of the last Babylonian empire. Their end has always began in Kenya when they cross the line. When the British did the same, the war in Kenya became too expensive for them. Here is another empire flexing its dirty muscle against our God. Let us watch and see the outcome. We are in the "Revelation" chapter, where everything will be revealed.
They will finally leave Kenya and Africa. Wish them well, they and their coons.!!!!

The fact that this article has elicited most comments than any other is a true vindication of the Wajinga nyinyi song, who cares about gays while the country is being raped everyday, only the poor care about these kinda issues while the thieves are busy stealing

For those supporting the rainbow flag and claiming we should focus our energy on fighting corruption how come they did not have a flag to symbolize the fight against corruption as that is OUR number 1 concern as a nation NOT sexual attraction. This is a backward mindset that Africans are quick to emulate European behavior and the brain wash that love is love. Just like how history books were re-written in order to colonize, biology books are now being re-written to further their agenda of depopulating the world by order of confusion with the gender identity politics.