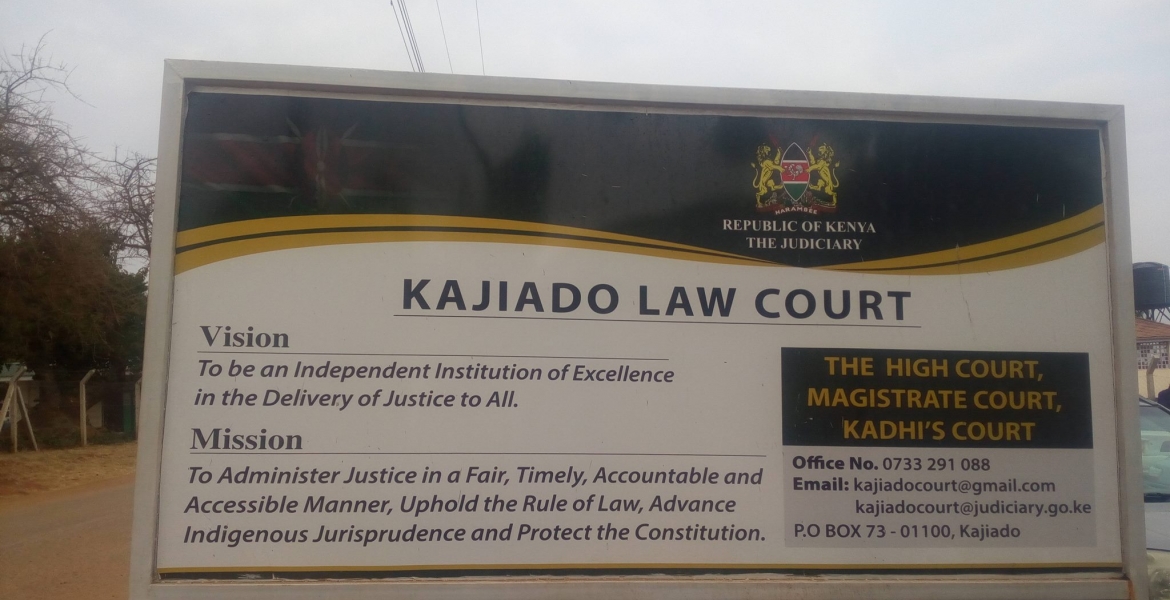 Three Kenyan men, including a secondary school teacher, were on Tuesday arraigned at Kajiado Law Courts for allegedly engaging in gay sex.

Appearing before the court, George Sane, Dickens Ouma, and Martin Kithure were charged with the offense of engaging in an unnatural act contrary to Section 162(a) of the penal code.

The court was told that Sane, a teacher at Marhab Girls Secondary School in Kajiado, engaged in sex with Ouma and Kithure against their order of nature.

Ouma and Kithure, who are from Mombasa County, are said to have met Sane on Facebook before arranging for a date in Kajiado. Police said Sane agreed to pay each of the two men Sh10,000 for the sexual act.

After engaging in gay-sex, Sane allegedly refused to pay the agreed amount and insisted on paying half the price. Ouma and Kithure, who are in their early twenties, decided to report the matter at Kajiado Police Station on Sunday.

They were all arrested and locked up pending arraignment. Ouma and Kithure had traveled all the way from Mombasa to Kajiado to meet their date.

The three pleaded not guilty to the charges and were released on a cash bail of Sh100,000 each.

Meanwhile the country is being looted but what people do in the privacy of their bedrooms is the #1 priority.

There is a place worse than Sodom and Gomorrah. It is called the gutters of ignorance. It appears like you live there.

Look here you Sodoman! Is there anywhere else dirtier than your Mkundumania (Gay sex)? Of course not. So good riddance to your early AIDS grave.

I wonder why non gays like you obviously and me otherwise known as straight or heterosexuals also get infected anyway when they are having sex with the opposite sex...

Your ignorance will not take you far! HIV DOES NOT CHOOSE SEXUAL ORIENTATION, NATIONALITY, COLOR, MARITAL STATUS OR LACK OF IT, GENDER to name but a few. You must protect yourself the best way you can at all times and seek medical help if you fall ill.

HIV/AIDS is not a gay person's disease Anno. Watch and you will see... The more you know!

A foreign force must be behind this Homosexual drama (NGO's) with the intent to bring this issue back to the limelight as a topic of discussion, in an attempt to influence Kenyans to accept the illegal homosexual lifestyle.
One cannot go to a court of law to seek remedy for an illegal transaction gone wrong. For example, you cannot go to court to collect Chang'aa debt that the other party did not pay; and since
one has a right not to incriminate himself in this case, the government will be forced to convict them using their uncollaborated testimonies as evidence. More than one's own testimony and confession is needed in a court of law to convict. They will be portrayed as innocent victims persecuted and discriminated against by the government as a human rights issue.
Without outside testimonies and evidence, other than their own they will emerge as victims persecuted by our court systems and be reported by the medias as an example of human right violations hence, the need to change our laws to accept gays and lesbian lifestyle in Kenya.
These guys are being used as political pons by foreign operatives (NGO's) to manipulate our laws and plant homosexual/lesbian culture in Kenya. Note: These guys are coming through the back door to challenge our anti gay laws.

The Barrack Obama NGOs. No wonder Michelle had her kids by In vitro instead of natural.

What an ignorant uneducated and insensitive statement to make and publicly announce your stupidity!

Many people men and women suffer from infertility. Especially huko Kenya. I have been fortunate and I count my blessings. But have seen many wonderful people suffer through this. Thanks to science and lots money and suffering they too can have children of their own through science evolution you idiot! Go to a corner and do your research first next time! Ugh!

What an ignorant uneducated and insensitive statement to make and publicly announce your stupidity!

Many people men and women suffer from infertility. Especially huko Kenya. I have been fortunate and I count my blessings. But have seen many wonderful people suffer through this. Thanks to science and lots money and suffering they too can have children of their own through science evolution you idiot! Go to a corner and do your research first next time! Ugh!

Homosexuality is the culture of the West("White man's culture")
Should Kenyans and Africans accept Homosexuality as a way of life?
During colonialism, homosexuality was not just about physical gratification but political and social control. Homosexual sex was "part of the violence perpetrated throughout the colonial world" remarks Aldrich.
Ref: Colonial Intimacy: The Rechenberg Scandal and Homosexuality in German East Africa
Colonialism and Homosexuality-Robert Aldrich
See"Colonial postcard showing European soldier sodomizing an African Soldier"
Journal of the History of sexuality
Heike I Schmid Vol 17 No 1
Masculinity and Homosexuality in German and German colonies 1880-1945 (Jan,2008)ph 25-59
On May 24th,2019 Kenya's High court upheld a Ban on Gay sex
On September 12,2019 Kenyan MP's shot down Evil Homosexuality debate.
Kenyans, we must stay vigilant because NGO's and foreign interests will not rest until they have forcefully imposed their evil and violent culture on Kenya.

*political pawns... are foreign forces behind reports of rampant looting n corruption? Damn NGO’s leave us alone.DENIAL IS KEY TO COMPLACENCY which equals???????????!!!!!!!!!?!!

... And to those going to report this act.. Come now... First loose lips sink ships. Secondly, it's a CRIME in Kenya. Now look, nyinyi wote mko? Choose your battles eh?

I still care about my fellow gay humans. One day Kenyan laws will be all inclusive. Just not today.