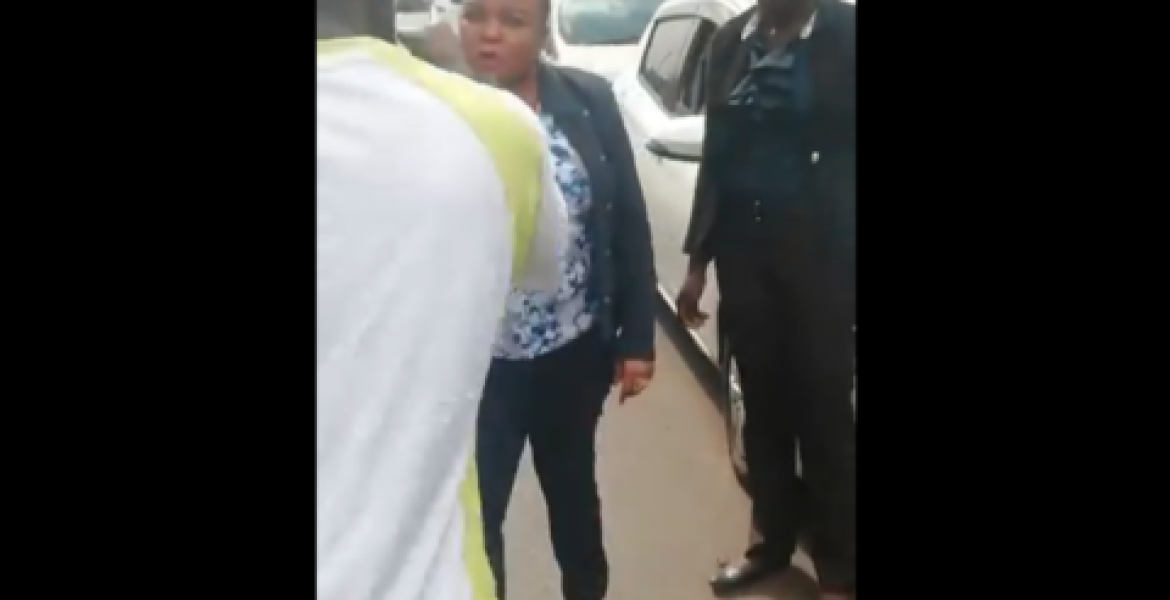 Kirinyaga Woman Representative Wangui Ngirici has spoken out after a video of an angry Kenyan man lecturing her for violating traffic rules went viral on social media.

In the 17-second video recording, a man dressed in shorts and a t-shirt is seen scolding the politician for overlapping and attempting to assault him.

“Shame on you! You are a grown woman! What the hell is this car?! Follow the rules! And you’re coming here to try and punch me?” the man yells at Ngirici.

Shortly after she was scolded by the irate man, Ms. Ngirici is seen boarding her SUV with registration number KCM 141R, which was parked in the middle of the road.

After the video went viral on Tuesday morning, Ms. Ngirici took to Twitter to explain why she was using the wrong side of the road, stating that she apologized over the incident.

She wrote: “Going by the clip making rounds on social media – Yes, sometimes back I had an incident involving overlapping on the road. I was rushing to attend to a patient by the name Magdale Wawira who was admitted at KNH.”

She added: “ Sometimes, even leaders are reminded by the citizens about the society and its values. I took the lesson, appreciated and apologized accordingly. To grow together as one cohesive and harmonious society, we must remind and correct each other whenever we go wrong or make mistakes ~ PWN.”

In a long Facebook post, the man who reprimanded Ms. Ngirici said he was headed to his brother’s house in Kilimani area when a black SUV begun to overlap and almost hit another vehicle head-on.

The man identified as Oluoch Dickens said he was forced to confront the politician after she alighted her vehicle to threaten a motorist who refused to give way.

“A woman [Ngirici] came out from the back seat accompanied by what looked like her bodyguards …she started insulting the driver demanding that he comes out of the car. She was very abusive,” he noted.

Oluoch said he was in pain as he had just undergone surgery and been discharged from Aga Khan Hospital two days before.

“I couldn’t just take it…I asked my Uber guy to stop..struggled to come out of the car and confronted her and her team…I didn't know who the hell she was but could put that face to a noisy politician..couldn’t just tell who..she and her team tried to confront me but I stood my ground though in a lot of pain and dint allow them to know. ”

“We all must obey the law,” he added.

Kenya politicians are full of it. She needs to be locked up for one good week apate adabu.

Wuuui Wangirichi,when it comes to traffic rules we all have an obligation to abide by them.Plus the fact that you have bouncers doesn't mean you go disrespecting other citizens on the streets.I am pretty much sure you wasn't the Dr rushing to do CPR to the patient you claim you were rushing to go see.Hence no need driving on wrong way.A little kindness,respect and love goes a long way,regardless of your status in society.The poor man you was trying to assault could be probably one of the citizens who helped you to get to your status by way of voting.Hopefully this will serve as a lesson to you and your fellow politicians who think they are always above the LAW.
KUDOS to Mr Oluoch for standing his ground,even though in pain.
And to traffic cops,supposedly state patrol officers,this was happening in broad daylight in the city.Did y'all get the hell scared by this mighty Women Rep.Can you all do better than just flagging poor citizens for bribes...We holding our fingers tight that one day we will be talking corruption in History.

Now we as a country are headed in the right direction. It’s baby steps but we are getting there. When I was growing up so called “mkubwa” was above the law and no one dared. Now we can see soon and very soon we will demand Rutos, and other massive land grabbers can bring back the wealth, kideros, mwilus, tax evaders, obados, dirty corrupt judges and lawyers. That day is coming folks it’s coming and that will be the liberation from this black made selfish economic oppressions

Omosh, an iota of it. What about looters of our sweat who had hidden their money abroad being 'begged' to bring their money back, WITHOUT questions, without TAX.... stolen public money....now sanitised, WHILE the taxpayer has NO BREAK at all. Poor taxpayer, the government cannot even pay for goods and services you supplied to them; because they gave no money, they DUMB you and take another poor taxpayer, get goods and services supplied, they can't pay, pick another.... months-years of UNPAID citizens. And then, the idiotic leaders RUB it on your face like Nirishi and those repatriating STOLEN money free of charge. What are rebellions made of?

This Oluoch guy is giving me hope.

Ati rushing to see patient as if he was a physician herself, how about if you had head on collision, what time wil u be going to see ur patient? No sirens etc, riskibg lives of other motorists. Gudos brother for shading the light and keeping it real

Only in Kenya we entertain all sorts of nonsense