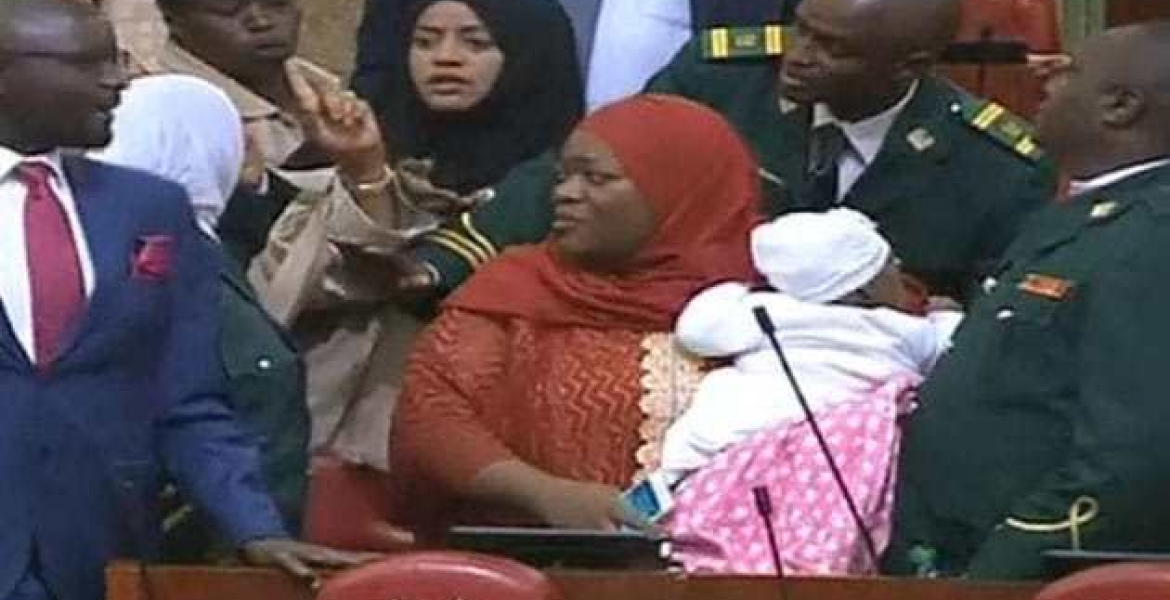 A National Assembly session was on Wednesday morning temporarily interrupted after a female Member of Parliament walked in with her five-month-old baby.

"All of us have children, this House has a stranger and it has never happened since 1963," said Duale.

After about 15 minutes of argument, presiding Speaker, Chris Omulele directed the sergeant at arms to throw Ms. Zuleikah and her baby out of the chambers.

Speaker Omulele explained that he had no other choice but to kick her out as her behavior was against the standing orders.

"I had an emergency, I have to come to work, and we have two sessions today a morning and afternoon one. In 2013, the Parliamentary Service Commission passed that we should have a room, a creche where we can breastfeed our child," Ms. Zulekha explained, adding that she had to choose between coming with the baby to work and staying at home.

In a show of solidarity, her female colleagues condemned the speaker for throwing her out, terming the move as barbaric and archaic.

Be ashamed with that huge salary you take home you cannot afford an emergency baby sitter ama you were just looking to trend for the day.Even in a regular job you cannot just walk in with your children .Respect the office you hold even if you do not respect yourself.Ati mheshimiwa bure kabisa what sort of example are you setting including embarrassing your child and your constituents other mpigs have their body guards carry their purses si unge ambia askari akushikie mtoto basi.

It's not about affording, would you hand your baby to anyone not vetted just coz you you have to go to work? What does the constitution say?

The hansard shows zero contribution from her. She could have just stayed at home. You should resign and go take care of your baby like public officials do in western countries. They resign to spend more time with their families when family commitments clash with official duties.

These bread of MP's are a disgrace! No etiquette, self respect or regard to the citizens they represent. Ni washamba wa ajabu! Like Raia (above) so eloquently put it, her over inflated salary should be enough to provide employment to another by employing a Nanny or mother's help. She was trying to make a point- I get it, lakini that was lost in translation. I pity the youth growing up to this lot. They have imported the behaviours of the Somali leaders who are renowned for hauling objects at their opponents. Disgusting!

Haven't read the terms of working in parliament, but many work places do not allow children. We are not even allowed to babysit when tele-working. but then, Kenyans have Rights.

I'm not sure I would take my child to a Board meeting I would have to call in or not show up at all. Wacheni, as someone has said, most work places do not allow children and understandably so ! If you think it is okay, why don't you try to do that at your work place in an important meeting or just at your desk.