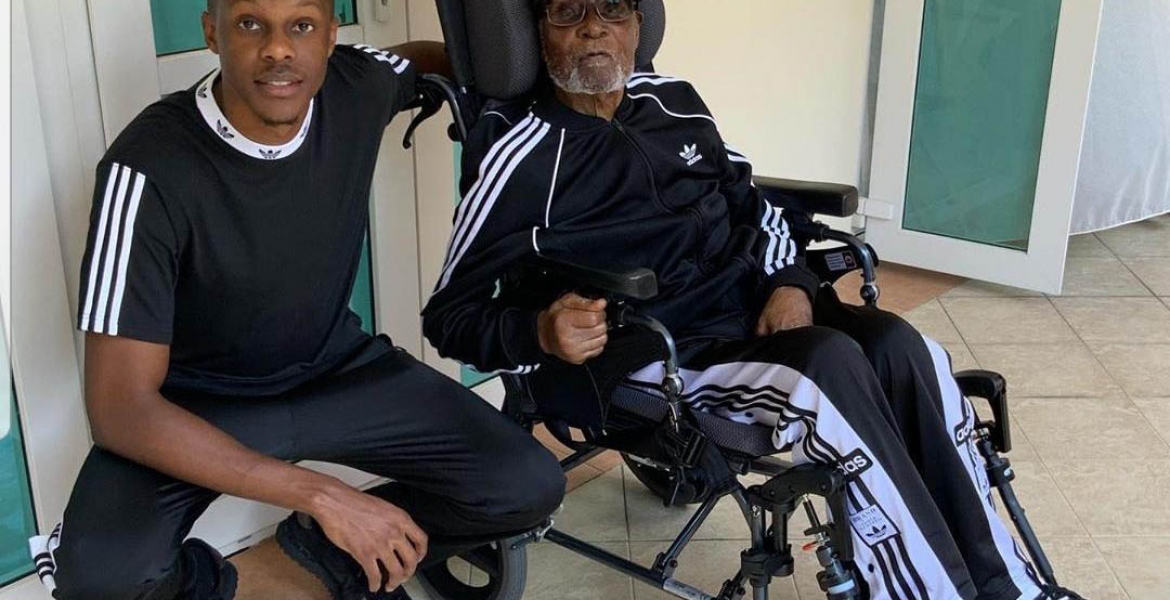 The latest photo of former Zimbabwe President Robert Mugabe has been shared on social media.

The photo of Mugabe, who is reportedly living his sunset years in Singapore, was shared on Instagram on Friday by his first-born son, Robert Junior.

In the photo, Robert Junior is posing beside his father, who is seated on a wheelchair and wearing an Adidas sportswear including a cap, jacket, pants, and shoes.

Robert Junior, 27, captioned the photo: “Hot boys up 20 in the fourth quarter.”

In November last year, Zimbabwe President Emmerson Mnangagwa announced Mugabe was receiving treatment in Singapore and was unable to walk on his own due to old age.

"He (Mugabe) is now old. Of course, he now is unable to walk but whatever he asks for we will provide," Mnangagwa said at the time.

"We are looking after him. He is the founding father of the nation of Zimbabwe. He is our founding father of free Zimbabwe."
Mugabe, 95, was ousted from power in a bloodless military 'coup' last year after ruling the South African nation for 37 years.

We pray for you; you have been one of our bravest in Africa.
We hope African leaders learn from all these. That while in power you uplift the institutions in the countries that you govern so in your subset years you are taken care of within your country and among your people and not seek help from without.

Pray for an AFRICAN DICTATOR? You people shall remain a CURSED lot.

Moses you're a dick

One of the greatest mistake he made is stay in the power for too long. He could have ruled for 2 term of less than 10 years in total and then retire. Too much of something is poison. He would be like Nelson Mandela.

Robert had the right idea but his deeds did not match what he was talking about. I doubt Mugabe would have let the chinese in like all the stupid African nations including Kenya have. however, Mugabe and his wife we're thief's and someone who had so much promise ended up like Uhuru, Moi and the father of corruption, Jomo "mwizi" Kenyatta. he stole almost the whole of coast province's land, Ruto followed suit.

When people take in too much western media garbage and instil it upon themselves to pass judgement upon their leaders, it's very sad. Yes Mugabe made the mistake of overstaying in power but as soon as he fell out with western world, they started creating labels for him, they made him look bad in the eyes of the world. Same thing they did to Gaddaffi, same thing they are doing right now to Paul Kagame.You might be a western puppet and choose to reason like them but the truth is, that no matter how uncouth their leaders are, they will always try to protect them. You will never hear them attacking their own. Can you imagine any African country with a kichwa maji president like Trump. The west si wangepanga njama to take him out hata kama watume CIA. How long has it taken for them to go round the issue ya ku impeach yeye? As long as it serves their interest, they will do anything including murder to keep theirs at the helm. African leaders who tow the line don't have to worry about any backlash from the Western world. In Kenya for instance looong before elections it was obvious Uhuru would get in because, he does things in line with their national interests and never questions or challenges them on behalf of his fellow Kenyans. Raila on the other hand would've been a headache to the western world. The war is Somalia for instance- hiyo sio yetu. As we speak, tanks and guns are rolling in as Kenyans are made to look the other direction. Mambo inafanyika Kenya kichini chini usitake kujua. People die for this shit. You stand up to the western world, they bring you down or eliminate you altogether. So whoever said Africa is free, take a deeper look again. Do your own research rather than just ingesting regurgitated baseless, false and over-hyped media, the western world inawapumbaza nayo. Regardless of everything, leaders like Mugabe will forever have my respect. Hao ndio balls zao zilianguka. Wacha wengine wenye bado hawajakomaa bado wako kwa titi la mama zao nkt!

Totally agree with Mgeni. When I see Africans squeaking that Mugabe ruined Zimbabwe, I wanna slap their teeth out.

Comrade Robert Mugabe overstayed in power. He could have ruled for maximum of 20 years from 1980 to 2000 and then retired with honour. The problem he decide to cling to power for too long.

Long live mugabe.He remains my best leader in the world with gaddafi.Men who don't kiss mzungu ass especially usa/uk.How i wish we had few african leaders like them???The strong nations needs to respect other leaders views!Why give sanctions to the leaders who don't kiss yr ass making majority citizens suffer,that's shows how rotten/afraid that country is??But the time united state of Africa gaddafi dream will b realised africa will rise n we will b giving sanctions to the western world the same they did to us.Today chinese r supa powers n they control the world while usa supa power goes continue to go dwn!Ussr use to b supa power that passed so pia hii unjinga ya sanctions from western world will come to an end n that day Africa will n our chance to denie wazungu visas/give them sanctions/give them Aid/financial supports,so life is karma/bitch.So b careful how u treat other pples when ur eating good juu they may feed you.

No matter how we argue or define democracy, African countries need a shrewd and a merciful dictators. Kenya and Africa are examples of glorified democracies where economies is shrinking at an alarming rate.

My dear Zim friends, Don't fight over Mugabe's legacy now. You foucs on building your country for the future generations. Zim was a prosperous country with well educated work force when I lived there as an international student in Bulawayo in the late 80s.
The fact is that not only Mugabe over stayed in power, he wanted his wife to replace him. He's the most corrupt and failed leader - those who defend him are absolutely corrupt and dishonest. The country would not have been in the current situation economically if free and fair elections have taken place in the country.