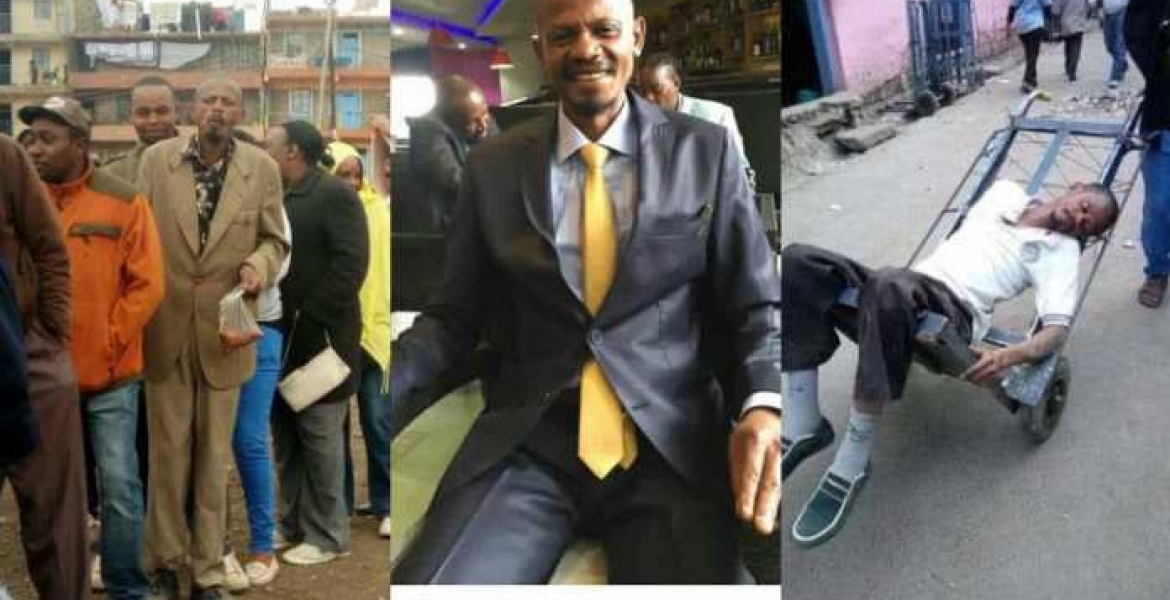 Kamotho became an overnight celebrity after a picture of him eating Githeri from a plastic bag while lining up to vote during the August 8th, 2017 general elections went viral on social media.

He trended for days and top companies and brands such as Safaricom, Ngong Crescent, Big Square, and Bonfire Adventures among others poured him with gifts and even vacations.

He was branded a 'national hero' and even honored with a presidential award.

Months later in 2018, he was taken to an alcohol rehabilitation Centre run by Kiambu Woman Representative Gathoni Wa Muchomba. This was after his quest for alcohol got out of hand.

After a nine-month stay in rehab, Kamotho graduated in a ceremony attended by President Kenyatta, where he was issued with a certificate.

The latest photo circulating on social media show a totally inebriated Kamotho being wheeled on a trolley in the middle of a street. 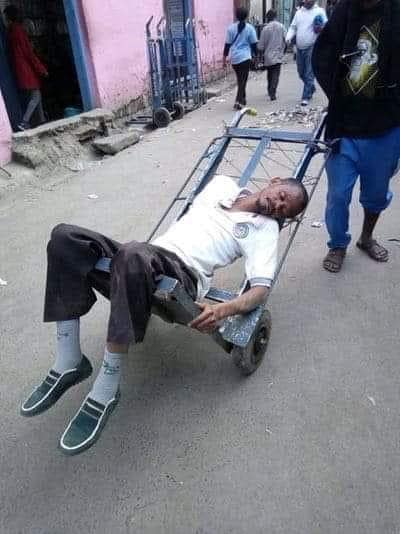 Reports suggest Kamotho was found in Nairobi's Kayole estate, where he lives, very drunk and could barely walk. A friend used a trolley to take him home.

Addiction is real and this man should be left alone by the media to deal with his demon.

The Media took Githeri Man From Zero to Hero; and now back to Zero. So sad.

It is the media that made him a celerity- as media always does.What's a big deal about someone eating food from a plastic bag while on a line to vote,or watch soccer?

So sad. No one should make a big issue out of a personal struggle like alcoholism.

Fake rehabilitation program. Kiambu Governor Waititu, and Women rep Wa Muchomba should be made to repay, from their own pockets, the wasted millions of taxpayers money.

I guess the president is regretting why he associated himself. Though this is reality on the ground. Get us some positive news how guys are turning around from grass to grace...maji ikimwagima hai….leki

This man is seriously sick. Better when he was eating githeri and work in munjengo.

these are the people who were getting awards instead of Joe Masiga... ona sasa

It is only God who can truly change a man not rehab. Kitheri mam needs to give his life to Christ & be commited. That the only way to get rid of the "thirst"

Jesus is everything,Matt 6:33 seek he first the kingdom of God and hia righteousness.

God will heal him

Saddened by the fact that many find this as a joke. It is no fun for him and his family. Addiction is an illness that needs proper medical and psychological attention. Can you laugh at someone with an open wound? Get him help if you can...If you can't, don't even make it an issue.

The silly man can spend hours in the queue to vote for jubilee but he cannot make the effort to stay sober.

ithink it's time to wake up. men like githeri man need prayers. nothing like joke. let's think of his future now that he has gone back to his usual lifestyle