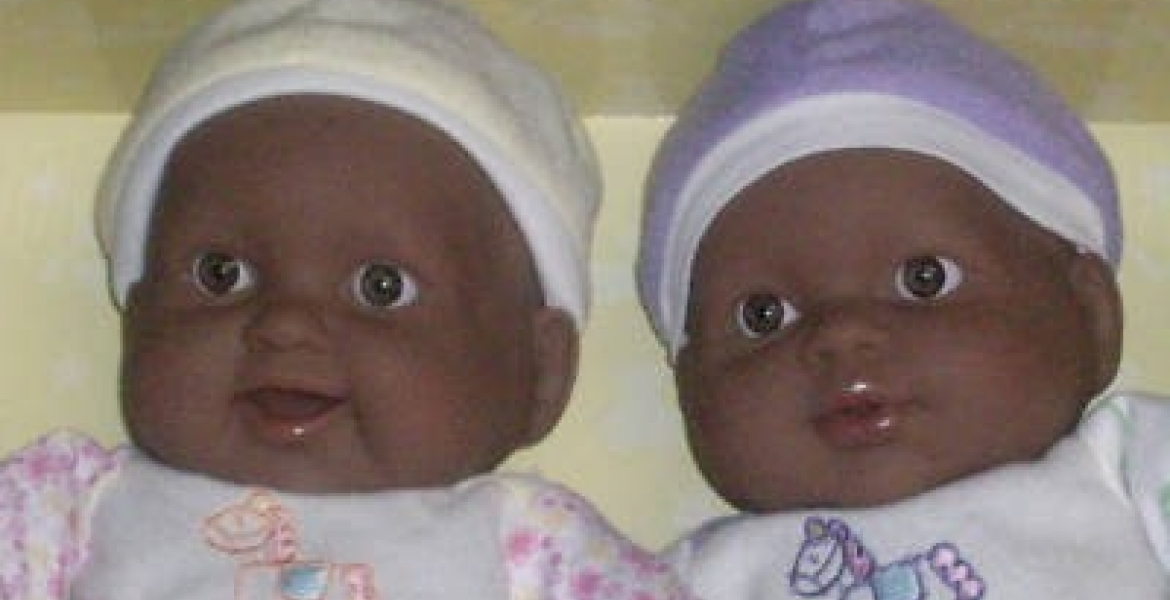 A Kenyan man and his wife have been arrested after they were found to have buried baby dolls while pretending that they were their dead twins.

Benson Onyango and 38-year-old Beryl Akinyi from Kamsama village in Suba North Constituency, Homa Bay County narrowly escaped lynching by irate neighbors on Wednesday after they discovered that what was buried were dummies and not babies.

Neighbors say the couple claimed that their babies passed away soon after birth.

Later, the woman claimed she developed labor complications and was referred to the Aga Khan Hospital in Kisumu.

However, her family members questioned why she was referred to another hospital despite delivering one of the twins at Homa Bay Hospital via Caesarean Section.

A few days later, Akinyi and her husband said their babies died shortly after birth.

Onyango, a carpenter, made two caskets that were used to inter the “dead” children.

The two allegedly proceeded to bury the children without informing other members of the family.

Residents who became suspicious, exhumed the graves only to discover that the buried 'children' were toys.

The neighbors attempted to lynch the couple but police officers from Mbita Police Station arrived on time to rescue them.

It is suspected that Akinyi may have given birth and sold her babies.

“We have also confiscated the coffins and the toys which were inside them for further investigations,” says Seroney.

Just when I think I have heard enough craziness in Jamhuri ( ***disclaimer** for Mhalisi, just like in US :-), then this smh!

Their game was Genius but Unwarranted.

Iguess there is a thin line between stupidity,and genious.

A genius is Simply a Person who finds/provides "Simple solutions to COMPLICATED problems". Nb: My mother was a Genius (who never went beyond 1st Grade) but Functioned at a 12th Grade level. I regret having Ignored many of her Motherly ADMONITIONS (because she was "Always right" for Real); a Mother whose "Foolishness" a many times Vanquished my School WISDOM; her "Stupidity" beating my Cleverness hands down.

I beg to differ.There are no simple solutions to complex problems.

I differ without Begging. So FYI: Experience over the years has taught me that WISDOM solves Complex problems (by making Right judgments; right decisions; and Finding simple Solutions to Complex problems). And hey! Without Kidding,you sound a tender Mama's boy so Lacking in WISDOM.

since you have wisdom,and have simple answers to complex questions,and you are a staunch christian to boot,how come you have never answered my question? The question is, if Adam and Even are your two parents from the beginning, how did we get to 10, 12, 14, 455, 56666, persons?

So were they arrested for burrying the dummies or for selling the twins? Coz if it is selling, that kind of business is done in our maternities without any problems!

Because "It takes a Village to Raise a Child in Africa", I think the Couple's problem was their Lack of Social-Economic independence of selling the Twins without their Family or Society questioning the Whereabouts of their just born Kin (twins). It's not like in the US where a Neighbor knows No neighbor.

Please understand this couple. They are mentally sick. They are troubled and somehow cussed for being unproductive which contribute to the mental problem. They need cancelling and not be arrested.