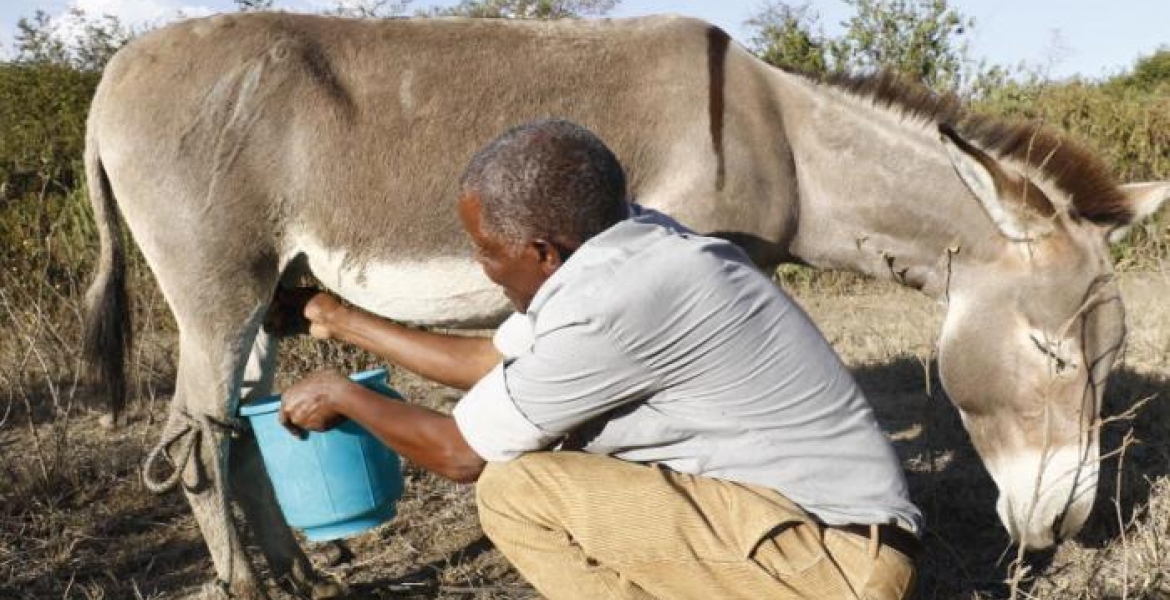 A Kenyan man has opened up about how he makes a killing from selling donkey milk.

In an interview with The Standard at his farm in Kamere Centre, on the shores of Lake Naivasha, John Nduhiu says he has been rearing the animals in the past five years. The farmer says he currently owns more than 10 donkeys.

Nduhiu explains that he has been milking the animals and selling the produce to willing buyers in the area.

“They are just like cows; others are difficult to handle but most are gentle. They behave well and know when it is milking time. Gentle ones do not need to be tied up to stop them from kicking. They just wait until you are done and you release the baby to suckle the remaining milk,” he says.

He says his customer base has continued to grow and currently sells a liter of donkey milk at between Sh200 and Sh250.

Nduhiu claims that donkey milk is highly nutritious compared to cow milk, and advises his customers not to boil before drinking.

“The best way to drink donkey milk is to take it after milking. If one wants to drink the milk the following day, you keep it in a fridge overnight and dip it in warm water before consuming it. That way, it will be effective,” he notes.

He notes that most of his clients who were suffering from ailments such as asthma, arthritis and high blood pressure have been cured.

His plan to increase his herd of donkeys has been derailed by the increased theft of the animals occasioned by the opening of donkey abattoirs in Naivasha and Mogotio.

“I always wanted to expand the venture and start a donkey dairy but since the opening of donkey slaughterhouse in Naivasha and Mogotio, theft has dealt my dream a blow. At one point I lost seven of them and I decided to sell a few so that I could remain with a manageable number,” he says.

Nduhiu has invited animal experts to partner with him on donkey milk research and how to improve his breeds.

It's is very yummy coz i have tasted fit my neighbor too.

INGENIOUS! This is how we need to be thinking- we have resources we just do not milk them :-)

@Imara, hujakunywa maziwa ya binadamu? Did you breastfeed? Are you Tarzan? The milk is too precious for sale. It is donated instead.

Let me chip in too.Hata maziwa ya ngamia nitamu...
Has anybody tried maziwa ya giraffe?We should domesticate some of these herbivorous animals for milk,and give ng'ombe a break

Times have changed. Growing up in Central Kenya many devout Christians never touched pork or rabbit meat. Older men wouldn't eat chickens saying that they were birds. Donkey and camel meat was not even on the radar. Now camels and donkeys are on the menu. Another 20 years and frogs, snakes, monkeys and dogs will be nyama choma. Necessity is truly the mother of invention. Shakespeare wisely stated that "Nothing is good or bad, thinking makes it so".

@ Mumbi, translating that thinking into action, is where good or bad is expressed.Thinking of'Mounting" your neighobors wife is OK,the hubby has no way of knowing,but when you actually do it,things can be explosive.
Now when it comes to food,I think as long as it is scientifically safe,and nuitritious, every thing is game with the exception of human beings,and our cousins the monkeys,gorillas...That's my opinion.Mindful that monkeys are a delicacy in some parts of africa.

Really, @ Imara Daima, canibalism still exists in this day and age?Any idea how they get their Human meat?

Capitalism at best! Nini haiwezi uzwa na hii era of information and free publicity. Just be careful not to jump on every bandwagon. Nimefikiria mara kadhaa juu ya hiyo maziwa ya punda but mawili na fikra zimekataa! Hiyo haiwesmake! Hell no. Milk is not the best source of calcium anyway

No wonder we have different Human being with different characters some kick hard..from this natural milk Chinese like dog milk