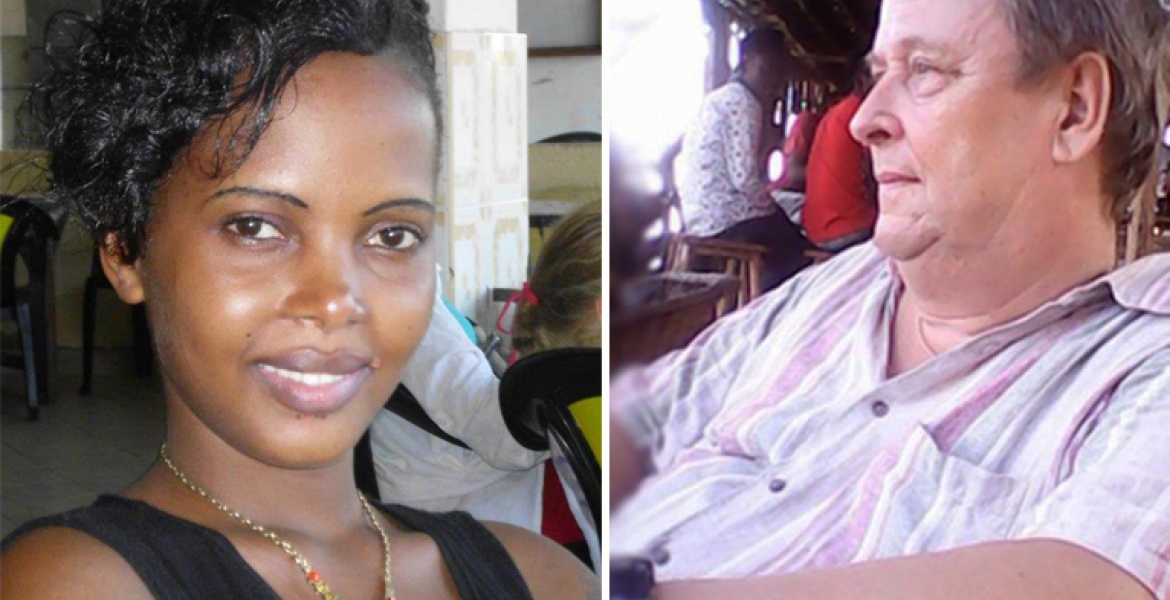 A 67-year-old German man based in Mombasa has taken to social media to narrate how his 26-year-old Kenyan lover robbed him before ditching him.

Pleschke Georg said his wife dumped him for another man based in Syokimau, Machakos county after he travelled to Germany to renew his passport. He said that Eva Karwitha escorted him to Mombasa International Airport in December last year when he was travelling to Germany.

“She brought me to the airport, hugged, kissed me farewell and promised to pick me when I arrive back,” he recalled.

However, when he jetted back to Kenya, Eva didn't show up at the airport to receive him as had promised.

“I arrived back at the Moi International Airport in Mombasa just a few days to Christmas. Nobody picked me up. I tried to call her, but her phone contact was off."

" I took a taxi to Diani. (Shock on me) when I opened the door of our home and found the house had been looted. My TV set, refrigerator, microwave oven and car were missing,” said Mr Georg.

He says that afterwards he learnt that the mother-of-one was living with her new partner in Syokimau, Machakos County.

“After all, I am not bitter. It’s true I am still married to a [expletive]. I wish her all the best in the future. There won’t be a third forgiveness chance to her. Not again. There won’t be a happy end to this drama, again. My door is now closed; forever and ever,” said Georg.

He said he “won’t trust a Kenyan woman again”.

However, when she was reached for comment about the allegations by her former husband, Eva said: “I want to be left in peace. I don’t want drama this time round. I moved on, and he should as well”.

She accused Georg of being uncaring and unsupportive to her family, citing a case where her mother fell ill.

“I lost my mum last year to cancer. When mum was in hospital, Georg met with my aunt at a supermarket and asked her why we hadn’t signed a form for the doctors to end her life since she was ‘wasting too much money’ in hospital. This, I found later after burial,” Ms Karwitha told eDaily.

“I was summoned home and asked if I knew anything about it. I was shocked to say the least. “I had taken in my kid sister, who was in Class Eight that time. Georg was not for the idea, and we would quarrel nearly every day about it.

“Georg was not for the idea, and we would quarrel nearly every day about it. I gave up and left,” Ms Karwitha .

Get away from troubled men. Peace of mind is important. These Caucasians only think of themselves. They don't give a hoot about other people and that is why Georg worried more about money than your mum's life. Run, run, run.

This is not fair. She should have told the old man that she is done with him due to the two reasons she has given. And again, why loot his properties. We call it karma. Do it to me and it will follow...

I would DUMP her if I came to Learn she Bilked an Older man.

@guest1 may be the current guy was in on the bilking.This is not new.We know of young girls who call oldmen/sugardadies-ATMs.The go to ATMs withdraw the cash and squander wirh the young stud.
Seriously isnt this just a trade off between a youthful body and abank account?.40 year age difference...how many things do they have incommon ?

Maxiley I agree. The younger guy could be an Accomplice. Ashikwe!!!

She must be a Christian or a Muslim. The followers of these two decadent religions are devoid of conscience, logic or humanity.

What do you mean, explain how we are that devoid. By the way what is yours, religion?

What do you mean, explain how we are that devoid. By the way what is yours, religion?

Amadiba dont say You've NEVER been Taken Advantage of in 1 way or Another.

Always good to get the other side of the story. He should have learned the wife's culture especially the part where family means so so much to us and we take care of the sick even when we know of the eventuality. As far as taking things out of the house, she paid herself for having to put up with his old behind. Why would anyone assume those things are all his anyway? Finally this guy has threatened her saying "there won't be a happy end to this drama again" take care Missy, don't show up dead.

she would have discussed this with the old man before moving to the other man. Looting when the man is abroad is seen as theft and not good

You want the fiscussion to involve the new fellow?This is dangerous wgen still married.

My heartfelt sympathies to you Sir. Welcome to the world of Kenyan women.Great looking and criminal minded, but the romp is worth the cost.

@Guest1. You are right, Yes, I have "been Taken Advantage of in 1 way or Another." However, I struggled hard and set myself mentally and permanently free. These days, I resolve all my daily life challenges by taking the "scientific highway."

@"John," When you are mentally free, you do not need "the man- made religions" to guide your daily life."

You take only the best from all citizens of our only home - The Planet Earth.

Organized religion is made for people without self confidence, feeble minds, who lack the ability to think critically.

The current man is stupid if he has accepted the lady.whatever you do in this world will come to you in return so at the end of the story both of them will regret.why are Kenyan ladies this way!!you make foreigners hate you.

Buying a book for others to read..

There always two sides to the story and there is a thing called Karma too. She could have been honest with the man and say the relationship is not working but forget all that, family first ! Good luck to the guy