Ruto, Uhuru Meet in Public for the First Time Since Inauguration Day 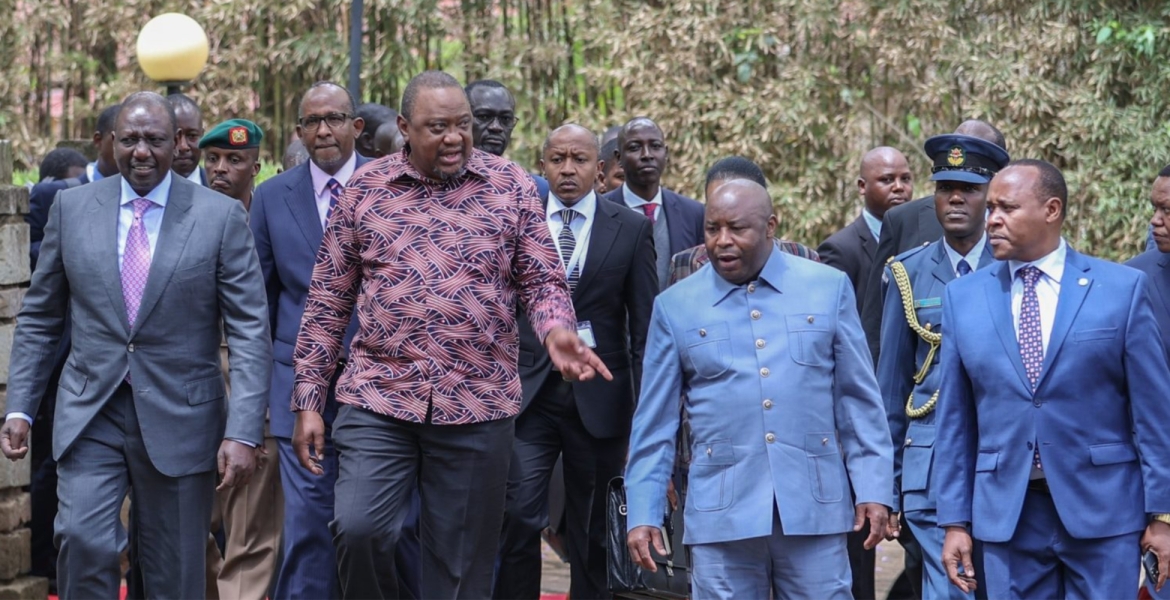 President Ruto and his predecessor Uhuru Kenyatta on Monday shared a podium for the first time since the former’s inauguration ceremony on September 13th.

The two met at Safari Park Hotel in Nairobi during the launch of the third Inter-Congolese Dialogue aimed at restoring peace and security in the war-torn Eastern Democratic Republic of Congo.

Kenyatta, who is the East African Community (EAC) facilitator, has been engaged with the peace process in Congo and was in Kinshasa two weeks ago following an intense war between the M23 rebels and the Armed Forces of the Democratic Republic of the Congo (FARDC) in North Kivu.

The third Inter-Congolese Dialogue, which kicked off on Monday, will run until December 3rd with a focus on accelerating the ongoing regional efforts to attain sustainable peace and security in Eastern DRC.

President Ruto has on various occasions assured of Kenya’s commitment in ensuring peace is restored in DRC, and Kenyan troops are already in Goma, North Kivu to aid in the process of peace and security.

“Having been to Goma and listening to stories of the suffering that people have gone through for so long, I'm more convinced that more effort should be spared in bringing peace and stability to the Eastern side of DRC,” Kenyatta said during the opening ceremony.

On his part, President Ruto lauded Kenyatta for his role as the EAC facilitator of peace talks in the DRC conflict.

“President Kenyatta has done a wonderful job as he facilitates this process because collectively as a country we value peace,” Ruto said.

He added: “I and my predecessor were on different sides of the political contest two months ago, the completion was stiff. After the elections, I met the President, looked him in the eye, and told him ‘Mr President you have started a very important process in EAC I want you to continue He told me he was ready to do it.”

That’s how it should be

While there’s every effort to broker and maintain peace within ourselves and our borders, Raila Amolo is planning for chaos or the least a violent demonstration just to upset a lawful process.
Uhuru needs to talk to what he calls his brother to practice a sober opposition.

Since losing in the elections, RAO's bitterness has carried in everything Ruto and his administration does.Ruto does nothing good according to RAO.How can that be.Even a sinner does good at times,and we ought to acknowledge that...albeit grudgingly.
Let RAO extend an oliver branch to Ruto.Let them have a cup of Kenya tea together;in Kericho.

You have been bought and paid for with blood money just like Atwoli. No one can ever trust a Luhya for nothing; you included @maxiley!!

Well,
>>There is something wrong with this KK government, a ban imposed by ministry of interior being lifted by public service minister, trade CS talking of maize while the CS agriculture is silent, sport minister commissioning exams while Kenya 7s are doing a fundraiser.

Former President Uhuru is doing a great job in Eastern DRC. I think the EAC needs to continue to use its weight and strength to advocate for peace among the various tribes and communities in Eastern DRC. The various tribes in East DRC want peace. There is a need for concerted diplomacy and mediation that will eventually produce stable peace deals between the various armed groups and the DRC Government. There is also a need for a never ending campaign for peace among the various tribes and communities in DRC. In other words, the EAC should speak very softly while carrying a big stick.