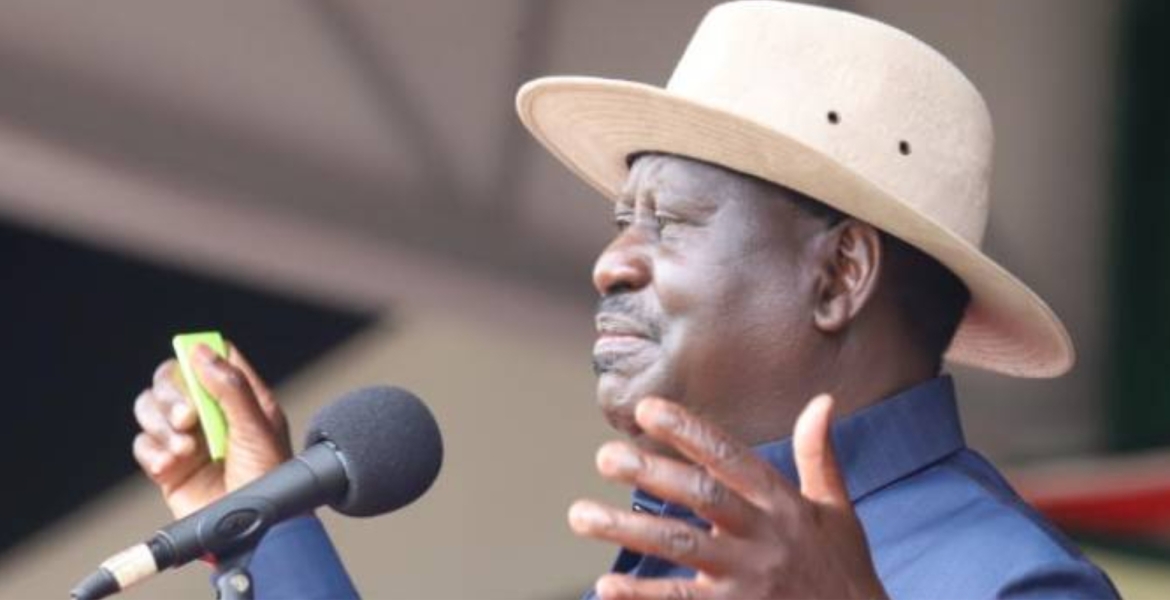 Azimio La Umoja One Kenya coalition leader Raila Odinga has said he will hold public rallies to oppose the removal of four IEBC commissioners who disowned the results of the August 9th presidential election.

The four, Juliana Cherera, Irene Masit, Francis Wanderi and Justus Nyang’aya, are being probed by the National Assembly’s Justice and Legal Affairs Committee after four petitions were filed seeking their removal from office on grounds of gross misconduct and violation of the constitution.

On Sunday, Odinga accused President Ruto of trying to impose a "user-friendly" IEBC on Kenyans by pushing for the ouster of the four commissioners.

"This regime is trying to send home the commissioners who stood firm on the platform of the truth and this is not acceptable. The people of Kenya are not going to accept it. These people stole the elections and we cannot accept that on top of that, they send away these other commissioners and impose on Kenyans a user-friendly commission to them," Odinga told supporters in Kisumu.

He said the Azimio group will hold countrywide rallies starting with Kamukunji Grounds in Nairobi on Wednesday to oppose attempts by Ruto to influence the appointment of new IEBC commissioners.

On Friday, Ruto and Odinga engaged in an online war of words over the ongoing quest to remove four IEBC commissioners from office.

Ruto told off Odinga and other Azimio La Umoja One Kenya coalition leaders, saying they should give Parliament an opportunity to hold the four “rogue” commissioners to account.

"The lords of impunity, who destroyed oversight institutions using the handshake fraud, should allow parliament to hold rogue officials who put the nation in danger by subverting the democratic will of the people to be held to account. New order is RULE of LAW not wishes of big men," Ruto tweeted.

In response, Raila said, "There is due process and natural justice, things aren't just done at the whims of the executive. The rule of law must prevail and not your jungle laws that you want to institute so as to subjugate Kenyans to a conveyor belt system of elections come 2027. We shall not relent.”

raira... thii ukiumaga.. kenyans tired of your nonsense! those 4 criminals deserve to be in jail

Ruto wants to fill the government with thieves, rapists and murderers.

That’s why he wants to control IEBC.

Bondo Express! Who cares? What happened to a million men match?

Everyone should care.
William Ruto wants to control IEBC so that he can control the people who are voted in.

The people should decide who they want as their representatives not William Ruto and his cronies.

Raila will never be the president of Kenya but he will forever be a pain in the butt for whoever is president. Long live Odinga, the pain of Kenyan presidents.

A leader does not need to work in government to lead.

Ruto kazi imemushida. Now the man is talking about having visions and he is continuing to make false promises.

Unga Revolution.
People are dying of hunger everywhere in Kenya.

All elective positions were won in the constituency level. We have never heard of any discrepancies arising out of the vote count in these areas.
Presidential elections were only tallied in Bomas. No vote stealing happened. All observers including ODM and Jubilee agree that the elections were free and fair
Azimio agents signed off in all the polling stations after verifying the results.
Should there be lose of life or violence instigated by Raila, then this time round he should be taken to the Hague. I believe the ICC prosecutor is following this closely.

No public consultations were done when appointing these commissioners. So should there be a warrant to remove anyone or all, public participation is not required. This is not another BBI.

Shame on you Raila, you are known for the slogan ''so and so must go", i.e Chebukati must go!, Ouru must go! Chiloba must go! Ruto must go!, all the people you demanded, ''must go'' you never gave them an option to for fair trial. Your 4 moles are being given a fair trial before they can either remain in office or quite. That is democracy. Its time you learn from the best.

There goes again, the violent Jaluos!

Same old Raila.
Election was stolen.Sixth Election.
It's a time of peace in Kenya. Anyone planning war or bloodshed in God's country will find that war within himself or in his backyard.
These are the last kicks of a dying horse.
Revelation first of all the tricks he has used in the past.
All the Kenyans he has sacrificed in the past, that energy is against Raila now.
Waiting and watching.
Raila keep on. You are running out of time and tricks. May all your evil intentions for Kenya be scattered seven ways!!