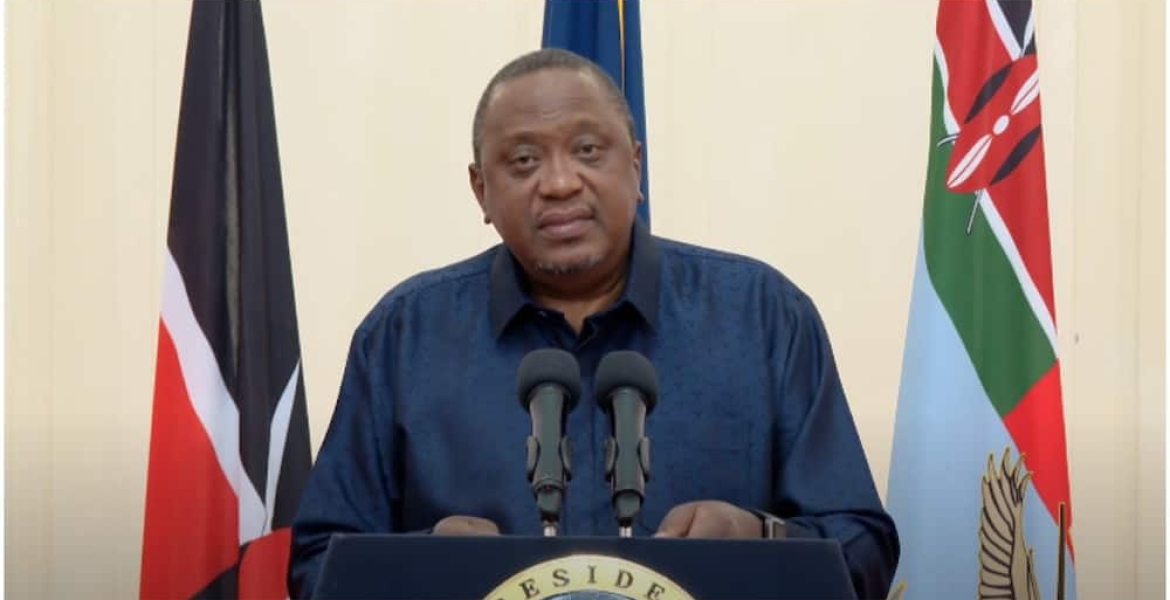 In a recorded speech released by State House on Monday evening, Uhuru urged Kenyans to hold all institutions to account, saying that their decisions must be consistent and coherent at all times.

“While we appreciate these institutions, we must also hold them into account at every juncture and their truth has to be consistent and coherent. This is the only way we will build our democracy. Because democracy is a work in progress, I urge the country to respect the institutions that midwife our new leaders. And in doing so I also urge citizens to constantly put them under scrutiny for this is the civic duty of every single Kenyan,” said Kenyatta.

The outgoing president whether elections should be about numbers or processes, adding that institutions cannot make one decision in one election and a different decision in another.

"[Kenyans] must test them [institutions] for coherence. They must constantly scrutinscrutinizeherence of the truth given by these institutions...has there been a consistent pattern from one election to another? Is it about numbers or is it about process? Can an institution rule one way in an election and another way in another election without scrutiny?" he posed.

Kenyatta, who did not mention Ruto in his speech, assured Kenyans of a smooth transition and congratulated all leaders elected in the August 9th general election.

“It is my intention to oversee a smooth transition to the next administration and all the necessary orders to facilitate this process have already been issued…I want to wish well all who have won as they guide our country into the future and I thank you all for the opportunity to serve,” he concluded.

Uhuru we talk about independent everything. From judicially, to corruption, to the common mwanainchi, rules and laws should apply to all but not to some. Like I stated before, emotions have no role in what the supreme court did. How come you didn't hold anyone accountable for euro bonds, Kemsha, covid 19 funds, 2 billions ksh looted daily in Kenya ?
Why are you so sore? Ok. Did what Putin did, be real, the swearing of Ruto goes on with or without you.
You and Ruto were developed by Moi, but you slept in class. Unfortunately, Ruto outsmarted you.
My question is, do you want Ruto to go after graft? If yes, how much did you and goons steal from Kenyans, how much did your father steal from Kenyans? I don't need to say more, it's time politicians understood that Kenya belongs to the masses, not the chosen few.
My 2 cents for the day.

Lord have mercy, this guy alludes that because his win in 2017 was annulled , then H.E. Ruto's win should have been nullified- what a moron - that after all your schemes of appointing 4 commish with briefs to go cause chaos (rig) elections on your behalf. I know you never followed the arguments- presentations by your "brother" where he presented forged documents / logs and all. Where your handshake 4 have made Kenya a laughing stock with strange math/ logic. You have sunk so low that a man who single handedly ensured you won 2013/ 2017A/B is a leper- untouchable . His family invested all for you - yet you have no grace to even utter his name. You say people abused you- but uhuru I saw you in Mombasa with joho! This dude called you unprintable names in 2013/2017 - what legacy of juvenile / childish image are you showing the youth (my children) that hate / bitterness because Kenyans saw through your little schemes- How do you face the people of mt. Kenya who told you they cannot buy your con game? Even the youngest youth in mt. Kenya saw your hate for DP and saw how ungrateful you were and said NO- They refused the tag of conmen/women who use other humans like tissue paper and laugh/ giggle about it. You ran a campaign of hate never imagined against Ruto not knowing that God saw how unjust/ vindictive/ selfish you are. What are you teaching Jomo jnr? To con people because he was born lucky? I pray he and his siblings will be better humans than you- they should not pay for your sins! You do not have to congratulate H.E. Ruto- actually if I were him I would ignore your call- it is not worth ones ears.

To question the ruling of the supreme court is tantamount to questioning the competence of the judges,and this is an insult.The ruling was based on the evidence presented by both sides.Your preferred candidate lost because Kenyans gave Ruto more votes.Its that simple.
There is no reason to sulk and fume. Your buddy Raila was second ,with 1.6M plus votes,their is not shame in winning a silver medal in a hard fought race.

Comrade Maxiley,
That's how folks who are entitled behave.
The issue he has is he thought himself as the east and central province kingpin.
The masses rejected him.
It's a bitter pill for him to swallow.
But let's be real, we've come along way as Kenyans and we are getting better.

Unfortunately, your corrupt brutal dictatorship ways were defeated spectacularly by Wanjiku!
Get lost into the oblivion of drunkenness! We the Agikuyu hates you, and rightly so!
No hell on earth shall we allow you to destroy our democracy!
Bullshìt!!!!

Have we liberated Kenya or have we created 2 VILLAINS? Kenyans we have memory of a warthog . Pray it does not comet o haunt us

For heaven's sake, just say something....find something nice to say to WSR....he was there when you needed him most. HakI Uhunye...you started nicely...WE even swallowed the bitter pill ya handshake... Why couldn;t you choose to leave nicely and leave a warm, friendly and open door. Leo umeniangusha tu sana.

Congrats to our new president, DR. WILLIAM RUTO....I say it on your behalf UK.

The scheme was that they hire the 4 commissioners led by Nganyaya to distance themselves with the results. This way they use it in the petition to challenge the process. However it came out a little to late. Even the Supreme Court judges had followed the process and they knew that the claim of opaqueness was not genuine.

Entitlement! Thats what it is. Uhuru just go home in peace. Just get over it. The shame, guilt and disbelief you exhibit publicly won't help you anymore. You single-handedly destroyed the dream of Raila ever becoming president by your arrogance, ignorance, pride, detachment from reality, and mehe-mehe-mehes that made the Kikuyus snap. You made Kikuyus and other Kenyans see Rutos in the lens of a lesser devil. I forsee a scenario where young lawyers will drag you in court from protecting your family from national scandals once you vacate office. And that is your fear. You destroyed your relationship with the judicially by using the Moi-era bribery tactics. The belief that leadership, specifically the presidency, belongs to the scions of dynasties, a cluster of idiots who think that only certain individuals and their families, relatives and friends and cronies, MUST be in government for Kenya to have real leadership substance. Wrong! As ethnicity and tribal kings euphoria begin to wither as witnessed from the Kikuyus in the last election, this has sent out a not-so-good signal to other leaders that are swaying away from them. The Kenyattas, Gichurus, Koinanges, Kinyuas, The Railas have for so many years dominated and brainwashed the Luos for so long. The Murembe nation by the Wamalwas, Mutavatis,Kaa Ngumu kama Ngumo, Wetangulas, Mwangares, and other scions from the 60s, 70s and 80s leadership making the voters believe that leadership must come from them. The Kalenjins have had the domination of the Mois, Kosgeys, Biwotts, Bargetunys, etc. The Kambas by useless selfish Kalonzo Musyoka, Kilonzos, corrupt Ngilus, Mwendwas etc. The coast by mdomo kaya Nassir, Boy Juma Boys, Ngalas etc. Not anymore. Any Kenyan including mama mboga, watchman, farmers, wajuajis and others can lead Kenya. You started well, but ended it horribly. You bought 1000 acres near Maasai Mara, took Delameres Marura farm, used government funds to tarmac Moi South Lake road that ended at your hotel, The Great Rift Valley Lodge, extended the SGR to Naivasha that ended in your Kedong Ranch, now tarmacking Utawala-Kamakis to along your new golf club and your expansive family that harbors Brookside milk factory, and many more.