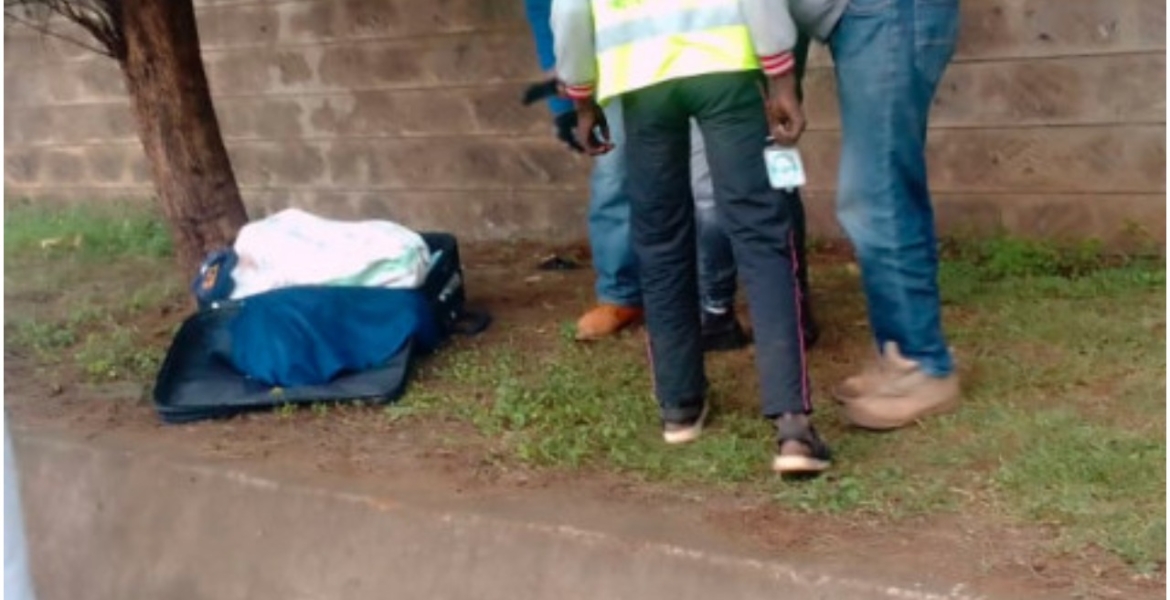 Police have launched investigations into the gruesome murder of a woman whose body was found dumped outside the elite GSU Recce squad camp in Ruiru, Kiambu County.

Juja Sub-County Police Commander Dorothy Migarusha says the lady believed to be in her early twenties was hacked to death.Her body had been stashed in a sack and put in a black suitcase with her hands tied from behind.

"She had also been tied around the neck with a nylon rope. The body had a visible deep cut on the left breast," reads a police report on the incident.

The deceased’s body had a written message suspected to be from the killers that read "bwana ya mtu ni sumu".

"She had ink writings on the chest, both palms and both thighs which read “Bwana ya mtu ni sumu,” the police report adds.

It is suspected that the woman was killed elsewhere and her body dumped along the perimeter wall of the highly-guarded GSU Recce headquaters.

The body was discovered at around 5:30 pm by pedestrians, who alerted police. The body was moved to City Mortuary as investigations continue.

😲... Barbaric much? Poleni for your loss!

Kenya's detectives are the worst in the world. They are unable to solve even the most simple case where in developed countries it would take high school students to solve it. Does it mean there are no cctv cameras securing GSU Recce hq's perimeters?. I won't be surprised if there aren't

Wahh, this is too gruesome. If she was dating a married man and got killed because of it. Then I must say the killers are stupid because the man will still find another young lady.

There is a regular contributor to stories in this newspaper whose name I cannot recall who always warns against mipango ya kando. I think it is Mkenya Halisi but I am not sure.

You may be talking of Maxiley.

Someone is married to a monster.

The "Written note" Alleges or Dictates that "She was Killed for Having an Affair with Another Woman's HUSBAND."

That is unnatural. The male species has to wander,and explore these creations no matter what you have in the house. Ask Bill Clinton,Samidoh, Uhunye, name them, etc.etc.

Shoddy investigation already right there, crime scene already compromised. Why on earth does one disclose to the public what that message was and all the other evidence that was on the body?

We keep commenting on these issues. Unfortunately more of our young ladies will continue to die Based on the fact that they believe that their bodies will AFFORD them that glamorous life style.
The issue comes when they start threatening men or getting pregnant.
Ladies, everything comes with a price tag.
But, on the other hand, men are to BLAME for condoning this behavior.
That 5 minutes excitement doesn't justify us buying anything for no one, since both of us are having fun.
But, since some of us use our little heads to think ,then this MURDERS will continue once our bigger heads comes back to their senses.

@ Kora Kanini, I would blame men too. Most of these unfortunate situations could be avoided if men controlled themselves,and not make themselves vulnerable. Those who fall victim to this kind of manipulations are those who show vulnerability. Never show awoman that you are vulnerable. She will exploit you to her advantage. Men dont have to be controlled by women's bodies so to speak. That's serious weakness that women can exploit.

Unfortunate its an innate weakness that most men realitically can’t control.

@ Rita, there is health appreciation of female beauty,which is OK.However, there is the senseless gawking,and rush to get her into bed before someone else does, is what I am against. Are you familiar with the Amazon tribe that walk around practically naked? If you do, you can understand that ,that behavior you mention can be controlled.

Uliposema ya kwamba, “ Never show a woman that you are vulnerable. She will exploit you to her advantage.” Umesema ukweli mtupu.