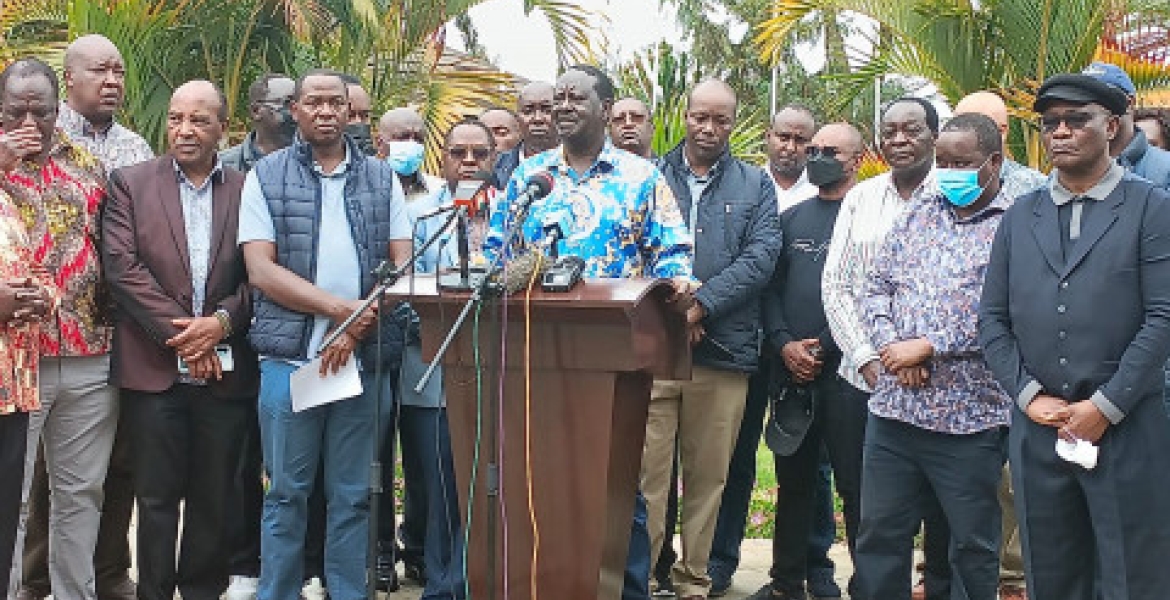 The governors threw their weight behind the ‘Azimio la Umoja’ movement presidential flagbearer following a meeting with Odinga in Naivasha on Monday.

They said their decision was informed by Odinga’s support for a decentralized system of governance, describing him as the ‘father of devolution.’

The leaders pledged to mobilize grassroots teams to facilitate voter registration in their counties in a bid to boost Odinga’s chances of succeeding President Kenyatta.

“We are happy as governors that we have found a person who can defend and protect devolution,” Kitui Governor Charity Ngilu said.

“We all as governors have come here to say, with one voice, that we are going to go out there to make sure that Raila Odinga is the next president of Kenya.”

The governors further stated that they have faith that under Odinga’s presidency, there will be fair and equal distribution of resources in the country.

Governor Ngilu took a swipe at Deputy President William Ruto and his allies, accusing them of opposing the strengthening of devolution and the transformation of the country.

“There is only one person who over the years never supported the constitution, not in 2005, 2010, and even now when we wanted to amend it. Somebody must forever be wanting to do things that are not right for this country,” Ngilu added.

Those are only 30 votes mr raila wake up demythologise slumber old man.N out of those 30 votes trust me probably only 10 who mite end up voting for you.This august u will cry again u have bin rigged.Kenyans won’t vote for a 77 yr old with no ideas of of leadership is.

Most of these Governors are going home. It’s there last term.

Good riddance to the crooks.

Why is Raila being endorsed by people who are being investigated for embezzlement?

Time will come when these gangsters will face the FIRING SQUAD whether in office or not.Many of them are in their last term while others will not win the second term.Others like Karanja(Kiambu) speak for themselves as they have never been elected.Moi’s son,Kinyanjui can only speak for his family not Mt Kenyans.But I wonder how long will hungry billionaire Kenyans will continue taking loans to sponsor these 48 expensive governments.

Most of them are thieves. They are coming through Baba for cleansing. Otherwise if they are seen to support Ruto, they get arrested for corruption.