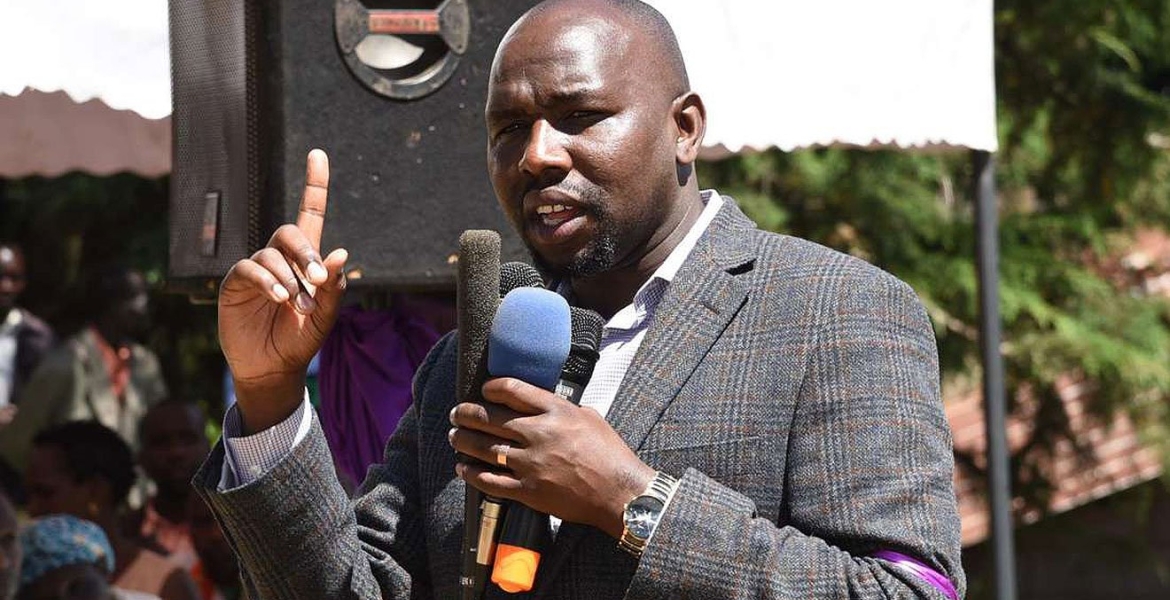 Speaking during the burial of slain athlete Agnes Tirop, Murkomen alleged that this was part of a well-calculated scheme by Uhuru to embarrass and punish Deputy President William Ruto over 2022 succession politics.

“I feel very sad that in furtherance of political fights in Jubilee and in the wish to embarrass the Deputy President, the government of Kenya denied the people of Nandi, Uasin Gishu, Marakwet, Rift Valley, athletes, and business people their rights in the name of punishing one individual,” said Murkomen.

The senator cited the government’s move to abandon key projects in the region, including three stadium projects in Kapsabet, Eldoret, and Kamariny, as well as the Arror and Kimwarer multi-purpose dams.

Murkomen claimed the handshake between President Kenyatta and ODM leader Raila Odinga was the root cause of all the problems affecting his people.

"All the corruption hails from the so-called handshake…since Raila came in. Uhuru should not punish our people so that he goes forth and says that our DP Ruto has not done anything to develop his home region," he said.

He urged Kenyatta to build adequate training facilities for athletes from the region as part of his legacy projects.

Ruto needs to be embarrassed! We want Ruto embarrassed for telling lies to the youths about wheelbarrows that will impoverish their future! You don’t even believe in the bottom-down economy yourself because you are not a fool to believe crap! That’s why you have been quiet because you know Ruto is just lying with fake political slogans to win the votes! But voters are now turning away from Ruto! Murkomen, let me asked you something? Is it in the blood of kalenjin men to whin like little kids over duduly crap? From Ruto to yourself and in between Sudi, all of you live a life of fear and whining! What’s wrong with you kales?

They are all guilty of the evil things Ruto have done to others! They want Ruto as the president to protect them and not to serve Kenyans! I agree with you that these goons are consumed by a lot insecurities and they always blame others for their sins!

Uhuru gave you the Kimwerer/Arrow 21 billion shillings but you and Ruto used the money to buy helicopters!

You have starved Rift Valley of development, Senator Murkomen! Stop blaming others for the mistakes you have made along the way!

Stealing public funds is illegal and Uhuru has nothing to do with Ruto’s theft of people’s money! You can play politics all you want but the people of Rift Valley know the truth about their thieving SON RUTO, while assisted by yourself and Sudi!

It is good you have brought this debate here so we can educate you and remind your people how much you have stolen from them! Shame on you Senator Murkomen! Speak the truth and the real fact why Rift Valley is not developed!

What did you do with the roads Moi build every where: to include the cattle dips?? And what did you all do with the CDF money? I thought Rift Valley had devolved counties? Jeez weezzz! Even Kutuny have now joined you! Asked him where the CDF money went; brother mine!

I ask Senator Murkomen to take responsibility and desist from blamingUhuru over the Ruto’s childish shenanigans! Ruto does not have the character required of the next president!

Ruto is like a little kid asking for a damn candy! He is always sucking on baby bottle because he needs to be fed to service! Ruto is too greedy and arrogant to be a president! He feel too entitled because as he says he came from nothing to some huge sums of stolen wealth - most of the money he stole from the poor Kenyans!

That stolen wealth must be returned to the people! Ruto wants to be president to protect his stolen wealth and to get immunity from the pending ICC cases!

We cannot have such a weak guy for the next president! He is also a liar, a conman, a thief and deals with tainted terrorists! Kenyans will suffer greatly under a Ruto presidency!

Murkomen, you are now taking the wheelbarrow politics to burial places because Ole Sapit and the Church have rejected the dirty politics of stone age matakonomics!

How come you and Ruto never tell kalenjins to embrace the bottom-down-down dead economic concepts of the wheelbarrow? A kalenjin is the last person to give Kikuyus advise of business! Kikuyu are shrewd business people and they don’t need Ruto wheelbarrow dead narrative!

You only tell that dirty stone age message to central Kenya youths while Ruto is buying them Chagaa to make them brain dead and physically blind! Your goal is to destroy the future of the people of central by killing their youth with empty rhetorics as political slogans! Who are you deceiving Murkomen? You should know better!

The more you target Uhuru to cover the good work he has done without Ruto, the more we climb the roof tops to enlighten all the Kenyans! Stop lying Murkomen! What Uhuru is doing everywhere can be seen and felt by your blind eyes! Nonsense!

Stop lying you son of a BITCH! Corruption was started by Ruto and yourself! You have stolen everything! No wonder Yhuru said he has accomplished more since the handshake with Raila! You keep talking about your Ruto corruption escapade! You too are the biggest thieves in Kenya and the world! You both lie like two devils! Find another script to narrate with your damn crooked teeth Murkomen! There will not be a Ruto presidency in Kenya! Both of you will steal Kenya blind should Ruto be the next president! Ruto is a bonafide THIEF! Development can come to Rift Valley is ruto can use the stolen money - 20K land, Weston, Muteshi’s farm, 5 helicopters, 2 hangers, other stolen hotels, etc to initiate projects you have neglected because of theft, corruption, graft and what have you, Murkomen!

Please do not wake the sleeping dogs of the Rift Valley! They all know Ruto stole everything! Go talk to Ruto about starving development in your damn back yard!

Use The CDF money to build the athletes a training facility! What Sudi’s you do with that money Senator Murkomen!? Talk is just too cheap!!

Murkomen - You are several grades below the level of the president of the Republic of Kenya! Addressing Uhuru in burial places will not be helpful! There are protocols to follow to address the head of state! You are just a junior senator, Sir!

You are a trained lawyer, you should know better! Don’t address other shady lawyers and judges as your damn lord? What happened to good manners, Senator? Shame on you! Did your mama teach you tacts in addressing your superiors?

This is where Ruto is failing because he is surrounded by a cabal of losers - Itumbi, Sudi, Muluka, Ndii, etc; you included!!

The boy is very bitter Uhuru fired him for acting like a TAD during his time as majority leader! It is the same thing with Kangata of muranga! These are useless politicians who hang out in bars getting toasted! But the problem is their naive voters who do not know any better! We will keep having problems with these idiots until such a time the voting monkeys wake up to their gimmick!

The only thing I can think of is Ruto and his henchmen from the kalenjin tribe chasing and killing Kenyans in the streets of Nairobi with bowls and arrows, machetes and spears after the 2022 Ruto win! Kenya will have the second genocide in Africa if Ruto is the president!

We can’t afford to take the risk with Ruto! He has been on JKL talking about who owes kalenjins what as far as land is concerned!

Please Kenyans do not vote for Ruto because he is evil and dangerous! Ruto will nuke other tribes; especially the Kikuyus, luos, Luhya and kisii people! It is real that Ruto will have MP Sudi as the second Biwot to eliminate other Kenyans! We can’t take such a dangerous chance!!

Murkomen - heed my word! Ruto cursed himself the day Sudi insulten Mama Ngina Kenyatta and Euti just went along with it! In the kikuyu tradition, we don’t curse our mothers; they bring blessings to all of us!

Ruto is at the mercy of Uhuru! He will not become president because she showed his dirty character through you Murkomen and the big mouth Sudi!

Get used to the fact that Ruto will not become president after Uhuru! Ruto has done a lot of of colossal damage to Kikuyus! They will not forgive ruto!

Kikuyus don’t trust ruto! The Kikuyus deeply believe Ruto is a dangerous man! The little kids whisper that Ruto killed their little brothers and sisters in Kiambaa in 2008! Tell Ruto to forget the presidency! He will never be one without the kikuyu vote!

Ruto could be president of Kenya. But not in 2022!Raila will win.But...
Raila is a passing cloud. Campaigns and health issues will wear him down. His surrogates pushed him to go for presidency. Yes,he will win. But he needs lots of mental and physical support in order to actualize his vision.If not, his longevity is diminished.
As for WSR, the time is not ripe: He needs atone demons of thievery,vengeance,adultery, tthugger, murder, greed, and pride.
Raila makes friends with erstwhile enemies.Ruto destroys bridges, permanently. A leader worth his grit must at times swallow humble pie.
Is Rift Valley being punished? NO.WSR had organized hecklers to disrupt State functions.
He embarrassed the President in front of Palamagambo Kabudi. He repeated the same,albeit with some finesse when President Chakwera visited in Wanguru stadium.
WSR deserves to be president, but not yet.He is yet to MATURE.
He will get it right with time. He shall be atoned. And voila! He shall be president,at least ten years from now.

Ruto could be president of Kenya. But not in 2022!Raila will win.But...
Raila is a passing cloud. Campaigns and health issues will wear him down. His surrogates pushed him to go for presidency. Yes,he will win. But he needs lots of mental and physical support in order to actualize his vision.If not, his longevity is diminished.
As for WSR, the time is not ripe: He needs atone demons of thievery,vengeance,adultery, tthugger, murder, greed, and pride.
Raila makes friends with erstwhile enemies.Ruto destroys bridges, permanently. A leader worth his grit must at times swallow humble pie.
Is Rift Valley being punished? NO.WSR had organized hecklers to disrupt State functions.
He embarrassed the President in front of Palamagambo Kabudi. He repeated the same,albeit with some finesse when President Chakwera visited in Wanguru stadium.
WSR deserves to be president, but not yet.He is yet to MATURE.
He will get it right with time. He shall be atoned. And voila! He shall be president,at least ten years from now.

A YouTube video on betrayal of Kenyan athletes in the Rift Valley exposes the corruption that led to the athletes lacking adequate training faculties in-spite of funds that were allocated for the purpose. Corruption by the RV officials was quite ostensibly the root cause of the fiasco. If Murkomen wants to make things better for the athletes and the constituents he should first look at his house before passing the buck. This is just the tip of the iceberg. The rest is for another day.

Those 24 yrs of Moi made some tribalist very entitled