“A Tsunami is Coming”, Raila Warns His Political Rivals Ahead of 2022 Elections 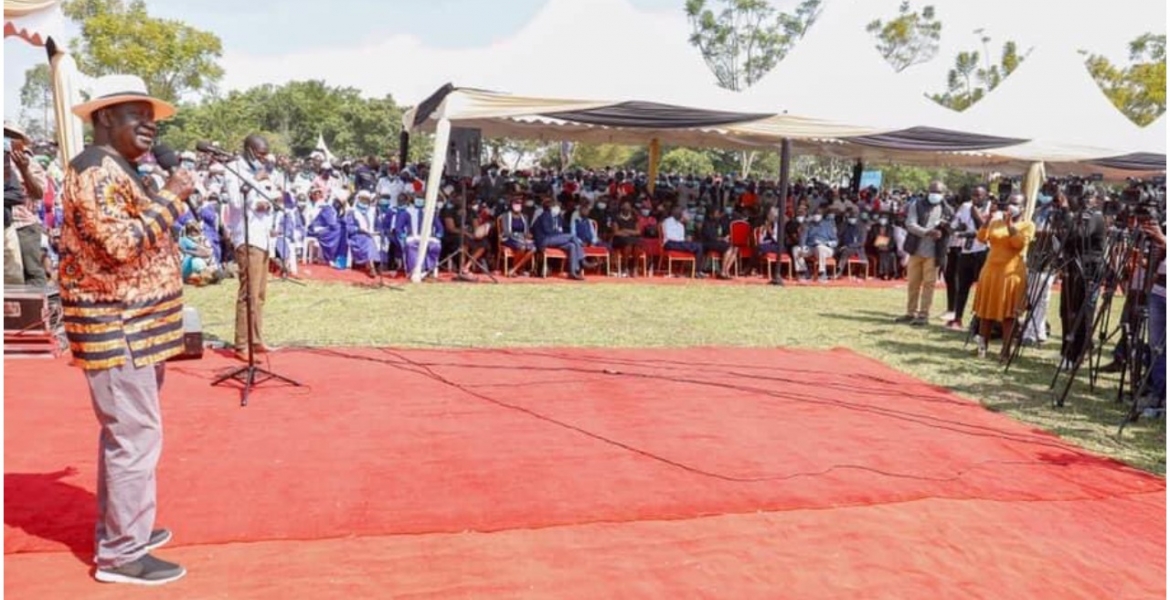 ODM leader Raila Odinga has warned of what he termed as a political tsunami ahead of the 2022 general elections.

Odinga, who spoke on Saturday during the burial of former Gem MP Jakoyo Midiwo in Siaya, urged his supporters to trust the process, stating that they are assembling a “heavy machine.”

“All I can tell you is that we are assembling a heavy [political] machine. They (opponents) don’t know what is in store. A strong Tsunami is coming. So I’m urging you [my supporters] to trust me; we know where we are going,” Odinga remarked.

He added: “We want our people to know that the machine we are making is a heavy one. The others you see chest-thumping are a passing wind. There is a wind coming. It is heavy, it will turn into a tsunami.”

“Bottom-up economics should be taken to the dustbin. But, unfortunately, there is nothing like a bottom-up approach when it comes to the economy. What would you be doing with a wheelbarrow or a handcart in the quest to improve the general economy?” posed Odinga.

At the same time, Odinga exuded confidence that they will succeed in their appeal against a High Court ruling that declared the BBI process unconstitutional.

“We are confident that through this competent team we are going to succeed. The BBI is going to move forward. That reggae will proceed,” Raila said.

Tsunami man. Tsunamis are no longer paying attention to you.

@ Guest777, yeap,an appropriate moniker. I have noticed the man loves to use the word"Tsunami".Its over used now.
Come on Raila, get another word.Preferably a swahili one.

Raila, yes you have been putting a heavy machine together that has been moving to nowhere for the last 50 years. There is no Tsunami coming other than that which will finally see you quite politics and retire. Those who were born in 1982, the first time you tried a coup in Kenya have raised their families and retired. You are still trying.
Presidency in Kenya is not for you.
Give blessings to the next person. Your time is passed. All your efforts have been in vain. You chose the wrong path, that of violence to get to where you were going.
You forgot if you aquire something with blessings, it bears fruit; If you acquire something without blessings (with curses) it may be in ICU and may even die before you take it home.

Spent cartridge, please go home ukafuge mbuzi jakwath!
You, Uhuru & Ruto should exit the scene like yesterday - mmesumbua nchi vya kutosha
Unending plunder of country, extreme poverty everywhere, complete lack of a moral compass - you are the perfect example of why they say the African never matured beyond 9 years! How true!

This devil who believes in violence,killing people,economic sabotage will never sleep in that house in the hill.Dynasties MUST fall 2022.Kenya belongs to everybody sio only 1/2/3 families who have continued to loot n rape our country dry.Sometimes I wonder if this guy little brains works?Mr raila kenyans loves you but many HATES you n we will bring u doing 2022.

If BBI has to be passed then it is best you retire.Kenya cannot afford any more misbehaving corrupt MCA’s and governors and we definitely do not need a president , prime minister and two Vice Presidents.No dynasties please.There are many educated capable leaders who are not tainted with scandals or financing side dishes.Again madam Chief Justice future generations will thank you if you spare regular Kenyans from this BBI madness.If the constitution has to be changed for you to win an election basically provide you with a head start you most probably do not deserve to even run.

Tsunami/Hurricane/Tornado/Storm/NGOMA cia Aka/Raila means DEATH & DESTRUCTION.Prosecutor Khan’s swearing in marked the end of murderer Raila’s and other warlords ABOVE THE LAW STUTUS.He has no chance of even being welcomed to share the loot after his 2022 defeat.