Skip to main content
Death Announcement for Denis Daudi Afande, Former Kenyan Ambassador to the USA
Konza Gets Huge Funding from The Kenyan Budget
The Onyx Place Apartments: An Investment of a Lifetime
Previous Pause Next
13 /kenya-news.php KENYA NEWS

Ruto Laments Arrest of His Allies, Use of Criminal Justice System to Settle Political Scores 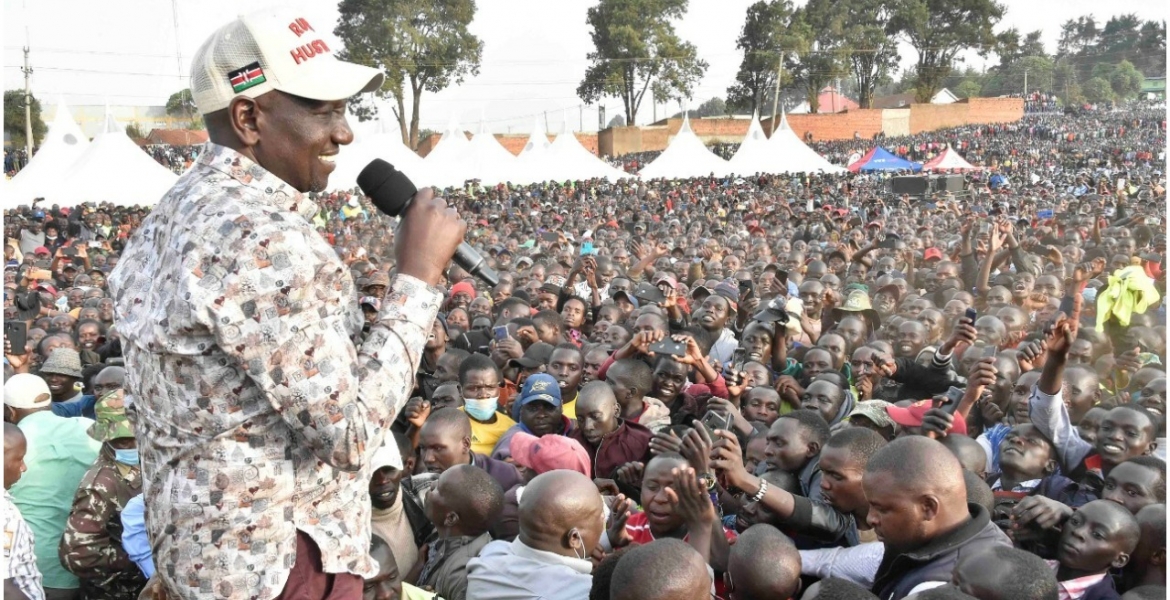 Ruto, who spoke in Kabarnet, Baringo County on Saturday, claimed that the leaders were being punished for associating with him.

“When did it become a crime to be friends with the Deputy President who was elected alongside the President and is a friend to the President?” DP wondered.

Maangi and Osoro were arrested on Monday ahead of the burial of former Cabinet Minister Simeon Nyachae in Kisii over allegations of planning to cause chaos during his funeral service.

At the same time, Ruto lamented the use of State agencies to threaten his political allies and to settle political scores.

“Stop using the police, the DCI, EACC, KRA to domineer politics in Kenya. Get better strategies to politick. Stop using the criminal justice system in Kenya to play your politics,” Ruto said.

He further praised the “hustler” campaign, saying it has become the central agenda behind all political discussions in the country.

“We have managed to change the debate this time. ‘Hustler’ and ‘wheelbarrow’ slogans have dominated the agendas discussed by every politician in every rally or meeting held in Kenya.”

Ruto, I hate to tell you that you will be the next to be fired and arrested very soon! Watch this space! Ask your mouthpiece Sonko how life is behind bars!

You are confused and still living in nyayo era. When is the last time you heard a real Dp or politician arrested? Sonko is a joke or fake. Kenya is not Ethiopia or museveni world though all Kenya do is to harass the likes of miguna*2.

What is nyayo era? I think you are confused to be talking about things that do not exist! Anybody can be arrested! You included @kiihu wa njambi!

William Ruto is a No.

Ruto is gaining so balls to be directly insulting Uhuru! Son of Jomo, get rid of this fool quickly! Ruto is your worst enemy! Get rid of him! Kenya will still move without Ruto!!

Who care about this son of jomo? His father started by taking is fools and here we are 60 years later kneeling to his son who was clueless until another idiot followed nyayo. Me we kikuyus tukoragwo thutha ta mutong'oe. One guy for life that backwardness just like agwambu guys who we think are odd due to them following the family No difference.

Your mama does! She surely cares if you don’t!

@Mathenge, he is technically outside looking in. He holds an empty title right now without power. He lacks vision for the country and the only thing he wants is to be president surrounded by thugs like Oscar Sudi, incompetent Kīunjūri and Murkomen. He will not win this battle. I would rather have Matiang'i for cabinet secretary than Oscar Sudi.

Ruto is the leader to the fellowship of thieves and thugs! Kenyans would make a grievous mistake if they were to elect him president! Ruto is only interested in stealing and nothing else! He is the wrong concept for the future of Kenya! He lives in the stone wheelbarrow era! He is the wrong man for any job in Kenya, let alone being a president!

Ruto hustler tag is similar to Moi’s fuata Nyao tag which ended up destroying Kenya over time! Ruto must be kept out of Kenya politics! Ruto is a very myopic guy not worth to be a leader! He is simply a croook who is misleading the youth for his political survival! Put Ruto I. Jail!!

The two slogans “hustler” and “wheelbarrow” are a curse to Kenya!

Ruto is a curse for Kenya’s development and growth! Ruto is taking Kenya to the dark days of YK92. This gut is a dummy and a stupid fool!

Awkward!
Both Uhuru and Ruto are thieves.

No body (dead or alive) can match Ruto’s level of corruption in the entire universe! Even the devil knows that Ruto is a thief!

Uhuru the chief thief needs to arrest himself and his co-thiefs if he's serious. At least Ruto is distributing. He could even distribute land stolen by Jomo 1st or he's waiting for president Ruto to help him?

Dictatorship and oppression and misuse of power is just beginning wait until RAO is president you will be reminded of the IDD Amin regime mark my words. We need new blood not tribal leaders.

Anyone to be president but not Ruto! Only the blind support this grand master thief who even stole from Uhuru himself and thats why uhuru doesn't want anything to do with him. Ruto gets the presidency, kenya is gone to the dogs!!!