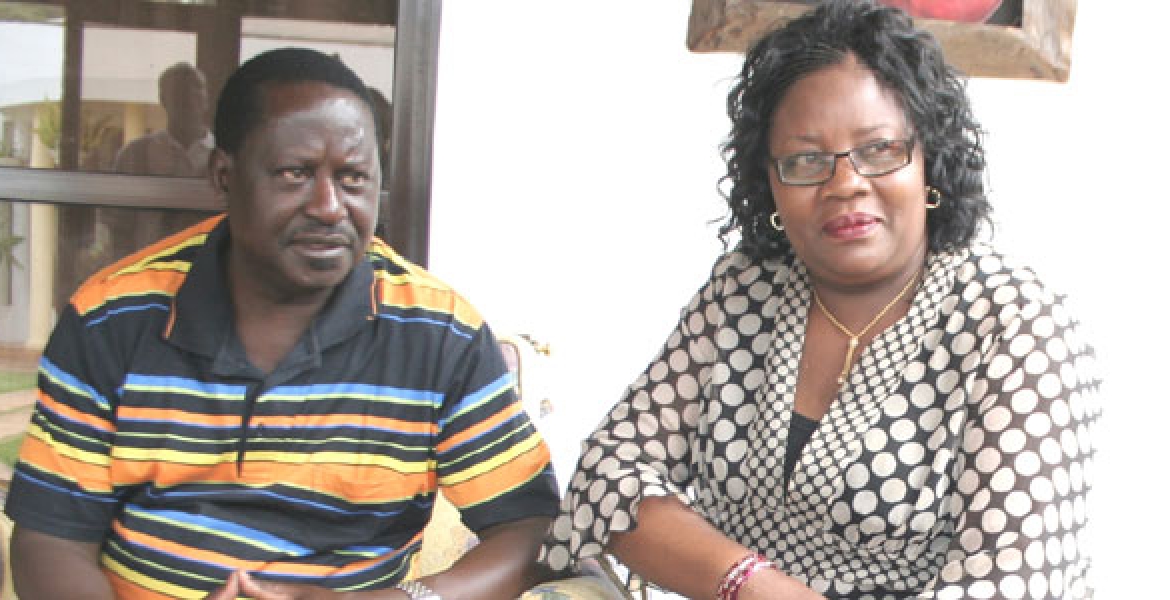 The family of ODM leader Raila Odinga has issued an update on his health condition after he underwent surgery in the United Arab Emirates (UAE) last week.

Raila went under the knife at a hospital in Dubai to treat a nerve disorder that has been affecting one of his legs, his wife Ida Odinga told The Standard in an interview.

Ida said although the operation was successful, Raila will remain in Dubai for a couple of weeks to ensure he fully recovers.

“He is in the United Arab Emirates-Dubai based International Hospital run by Germans. He has been successfully treated of a mild nerve disorder affecting one leg and not what has been alleged,” Ida told the publication.

“You know that currently there are no commercial flights. This means that if he is to come back, we have to charter a plane. But that process will be kicked off once he fully recovers.”

She, at the same time, told off a section of Kenyans who have been spreading falsehoods about Odinga’s health status.

“Treat such rumors with utmost contempt and abhorrence. It’s not right to speculate on someone’s health,” she added.

Raila flew out of the country last week in a chartered flight and is said to have been accompanied by his daughter Winnie Odinga.

His brother Oburu Odinga last week said Raila’s ailment was nothing serious, adding that he only underwent minor back surgery.

“Jakom is out of the country for a minor surgical operation in (sic) his back. It is not a serious health issue, but just a minor one. So, he’s okay,” he told Daily Nation.

So first he was attending some ceremony, then it was minor back surgery and now it's a nerve disorder affecting one leg. Who is the liar here? Kenyan politicians go abroad for minor health conditions and die shortly thereafter which means either the doctors abroad are really bad(if so, they should remain in Kenya) or its a major illness. Either way they are telling lies and tye Kenya taxpayer foots the bill.

He will die one day. He is human.

BBI is laying the ground work for the ethnic cleansing of Luo’s.

Ethnic cleansing has only ever happened to one group and it's not to Luos and I'm fairly certain Raila was either complicit or an organizer. Let's not lionize him. Death stalks us all but it's either at his back or has him by the leg.

I like this kikuyu artist "muigai wa njoroge" he told y'all that all this mpigs' death are waiting for them abroad...they will go walking and come back in coffin. As they fly on private jets to get treatment abroad 3 poor wananchi are sharing a bed in kiambu hospital! shame.... I wish his a** nothing but quick recovery but one thing this musician-muigai wa njoroge said in his newest song "migunda ino" was poor people tears are poisonous....I kidda agree with him.

This guy probably suffered a stroke . Atī nerve in the leg.Sounds ridiculous to say the least and with all his henchmen lying goes to show what a show it would be if he became president.

It's because of the beatings Moi gave him in detention for many years.

Build hospitals in Kenya. What about the Wanjikus with nerve damage?

This is the former prime minister, long time MP and undisputed leader of luo flying out of the country to be treated for mild nerve disorder affecting one leg. This kind of treatment or surgery should be happeing in kenya after decades of independence. What is independence for if we cannot do anything for ourselves?

Who else is suspecting most dangerous human immune deficiency fungae?

Who else is suspecting most dangerous human immune deficiency fungae?

He should stay there. It appears that once again his God has saved him.

BBI is laying the ground for genocide of Luo’s.

They were fattening him up to blame him then kill him.

Oh' No! Some times back RAO underwent a minor head surgery and now a minor back one to correct some nerves that affect ati one leg. all these are pointers to the dreaded Nervers System Damage.

Quick recovery Raila. Live long and enjoy the mess you have made of Kenya. Because you have been enjoying seeing others suffer l pray that God gives you enough grace to see for yourself areas you would have said, "Enough!" I hope it is a minor surgery...minor indeed! Haingefanyiwa hapa kwetu?