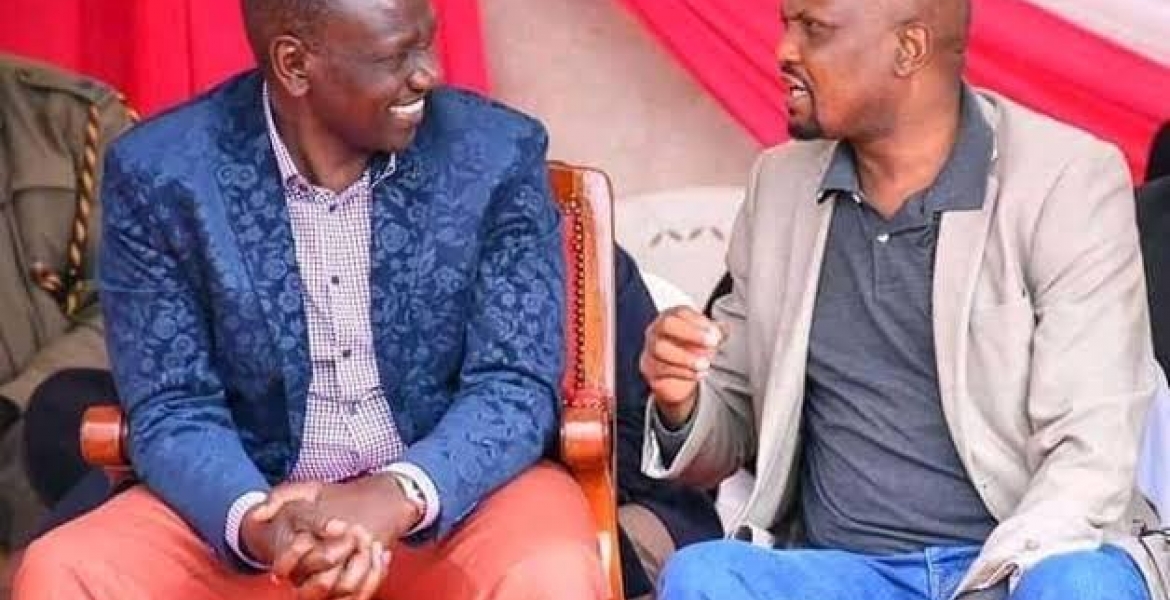 Kuria said this is one of the reasons why no amount of intimidation will stop Ruto from succeeding President Kenyatta in 2022.

Kuria, who spoke in Meru County on Sunday, likened Ruto to the biblical David who was crowned as the King of Israel after killing Goliath with a stone.

He further claimed that President Uhuru would not be the president today if he did not team up with Ruto in the 2013 and 2017 elections.

“I want to tell you before God. If it was not for William Samoei Ruto, Uhuru would not be president today. That one I can say without the fear of contradiction,” said Kuria.

He added: "Our win as Jubilee is credited to this man (Ruto) if it was just me and fellow drunkards who were left alone to campaign, we would not have won the polls.”

Secession is the answer to Kenya leadership problem.

Kikuyus and Kalenjins should have a country of their own.

These tribes have no interest in Inclusion. This is a fact that Raila refuses to accept.

The Ethnic cleansers from Kikuyu and Kalenjin tribes are no longer hiding.

Kikuyu and Kalenjins should go back to Riftvalley and continue killing each other.

We are done with fake drama where really people get killed.

Who is stopping you from seceding?

@guest - you may want to move to Uganda, Somalia or Sudan because Kenya is a Kikuyu country. If you decide to secede, Kikuyus will make sure you go to South Sudan to further divide that part of the world up!

Those who shed blood and many died for Kenya fighting for independence will not let even a quarter inch of the land go to your hands.

And whether you migrate to Somalia or stay, Kikuyus will still remain to be your lifeline as they have been for the past 58 years! I’m just letting you know before you start packing your junk! Knowing the bitter truth will set your lost mind free!

You are not alone, Somalia also wants a new border drawn along the coast and they have gone to Hague for that.( Talk of colonized minds) You might want to take the same bus and join them. Judge Crowford will be waiting.

What qualifies you to be the speaker,and interpreter of what God has planned for future? How about you telling us what God has planned for YOU? That's to important to the people you selve...So God favors Ruto over the rest of the candidates? You sure He gets involved in politics,or leaves such matters,as he does on many matters to individuals to decide using their own brains? This is what we call invoking God's name invain.
You poll every ten people at least half will say NO Ruto Too corrupt.What do you say to that Mr. Kuria?Stop angling and jockeying for a spot in his administration- in the unfortunate event that Ruto wins.

Kuria - please stop insulting God, lest He curse you like he did with those who betrayed Jesus at the cross!

You are hopefully looking for cover from Ruto because of your known corrupt nature!

Can you give Kenyans a break by keeping your foul mouth quiet? Yes indeed!!

@kuria - Kenyans do not need a heathen to tell them what God may want to say about Ruto. His sins and those of his associates will take a lot of lambs to be sacrificed for cleansing the whole country.

You just want to be an accomplice in spreading childish information to overshadow Kenei’s murder. Stop acting a Tad, Kuria!

Kenyans know the kind of man they want to leader them. But it sure will not be a thief and a murderer. Haashhh Kuria!

Moses Kuria is a naïve boy with emotional impulses. He does not seem to know the potential danger Ruto presidency can potentially pose to Kenya. Ruto is a ruthless killer who kills anyone who stands on his way. If he can killer when he is a DP what about when he became a president

In couple of years, someone will find themselves in the political garbage can praying and hoping they can be recycled.

Moses Kuria sounds like a damn fool. Actually he is a damn fool. All politicians are liars. They tell lies everyday. Most of them are corrupt as hell and they use religion as a cover. No hope.

@mercy - there is Hope if voters can wake up a begin to vote for quality people.

Kuria is plainly a useless idiot whose life is pegged on a murderer hoping to gain favors once victims are killed. I can assure you that there will be no Ruto or Kuria in sight when the next government is formed in 2022.

They are both expired cartridges that need to be expunged from Kenya’s political system to safe our country and its democracy.

Kenyans have had enough of thieves, conmen, drama-queens and murderers. It is time for the country to move on.

Ruto has more chances according to the numbers to b the president more than anybody else even if my favourite has been Ekuru Aokot.Wr not going to elect mganga,killer,economic saboteur,witchcraft Rao.Never n somebody can take that to the bank.Wacha a prepare kulete ushenzi 2022 tena n we will finish him @78 yrs n send him to his gods.