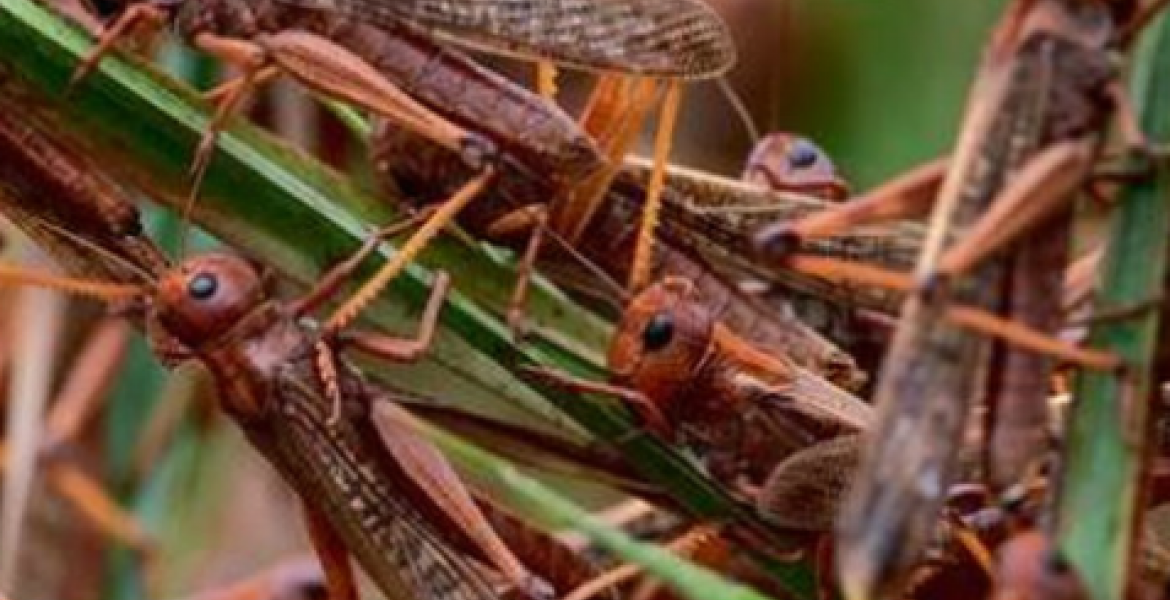 A section of Kikuyu elders drawn from Murang’a County claim that homosexuality is to blame for the current locust invasion in Kenya.

Speaking during a media briefing in Murang’a town on Tuesday, the elders alleged that the infestation dubbed the worst in Kenya in 70 years, was a punishment from God over increased homosexual acts in the country.

Muraya Gatu, the chairman of Murang’a Cultural Association announced the group will launch an anti-gay campaign to sensitize school children and the youth against engaging in the “ungodly act”.

His remarks were echoed by women elders who vowed to traverse the country to campaign against homosexuality, which they argued is killing the family unit.

“We are killing our communities by allowing members of the same-sex to be in relationships, we should live as God intended, this is likely one of the reasons why locusts have invaded Kenya,” said Mercy Wanjiku, the Deputy Murang’a Kikuyu Council of Elders.

At the same time, the elders also hailed Anglican Archbishop Jackson ole Sapit for vowing to boycott the Lambeth Conference in the United Kingdom over its support of same-sex unions.

The decennial conference will be hosted by practicing Anglican gay bishops from July 22nd to August 2nd, 2020. The summit tackles issues such as the ordination of women as priests, gay relationships and corruption among other topics.

“We support Archbishop Ole Sapit’s stand against homosexuality, the practice is ungodly and is nonsense brought to Africa from the West which we should all oppose,” Murang’a Kikuyu Council of Elders chair, Father Joakim Gitonga said.

Although I am not a Kikuyu and know very little of Kikuyu tradition I support Kikuyu elder's initiative to sensitize dangers of homosexuality engulfing Kenya today. Homosexuality is abomination of evil. It's profoundly immoral and wicked. It is a catalyst of spreading AIDS and other viral diseases that are detrimental to the well being of Kenya . Kenya does not have to embrace everything that is western in order to be seen as a democratic country and homosexuality is one of it. Maybe Kikuyu elders are right because this locust invasion thing started when homosexual were allowed to raise their flag at Africa's third highest peak-Mt Kenya. Symbolically, the dominant flag in Kenya today is a faggot flag because at its highest peak it dwarfs all other fags flying in Kenya today

@Kenya. Yes,this are biblical times. Year 2020. After 400 years of slavery. Time for Revelation and Restoration. Everything strange will happen before the world is restored. Those who know the times need to abandon foreign cultures and turn to their original cultures and their God. White jesus,foreign cultures including Homosexuality are against God. Time to stop all the strange nonsense and turn back to our God. No idols in 2020!!! Let's not conform or complain but watch with our eyes and wait!!

And so, 70 years ago when we had the last invasion, was the reason homosexuality? Wanjinga sisi. There is no connection. Just teach the morals and stop conflating them with natural phenomenon.

As you can see from the article, its best for some elders to just shut their mouths,and appear knowledgeable. What answer do the elders give for God not punishing America for its homosexual openness,and even having a gay man run for presidency? Or has he... will he...
And why is God choosing to punish Kenya now over homosexuality when all kinds of sins have been committed since Kenya came into existence.Arent all sins bad...
Lastly,who elected them to be God's spokesmen? Are they now replacing men of the cloth?By the way which God are we talking about here? The God of the kikuyus?
I would think God has more pressing concerns than checking on who is sleeping with whom.
With this kind of mentality, we shall for a long time remain shithole countries,till we start "thinking".Using out brains to question,and help makind by using education,and advancing technology.Non of those case if you have sex or not.

So, why are the locusts not invading US and Western countries where homosexuality is openly practiced?Is the locusts GPS not working or did God make a mistake? Who has a working GPS to lend to God so he can direct the locusts accordingly ingalau we save the poor famers in Kenya more heartache?

So he decided to punish Kenyans first,and give wazungu afew days to enjoy locust free skies?Is it because they sin less? Or is it because they are wazungu,and did agood job to spread the gospel to infidels...

Probably the gods is against the excessive alcohol the kikuyus consume or the mpango wa kandos or thievery in Africa or prostitution or the fagaggism, devil worshipping or greed or whatever else you and me do and think it's okey but in the eyes of the the gods is contrary. I never know there are ukuyu elders who says no thai early on the morning facing mount kenya.

Ngai! Who is exposing Kenya's nakedness (ignorance) like this? These ones and their thought should be limited to Murang'a.