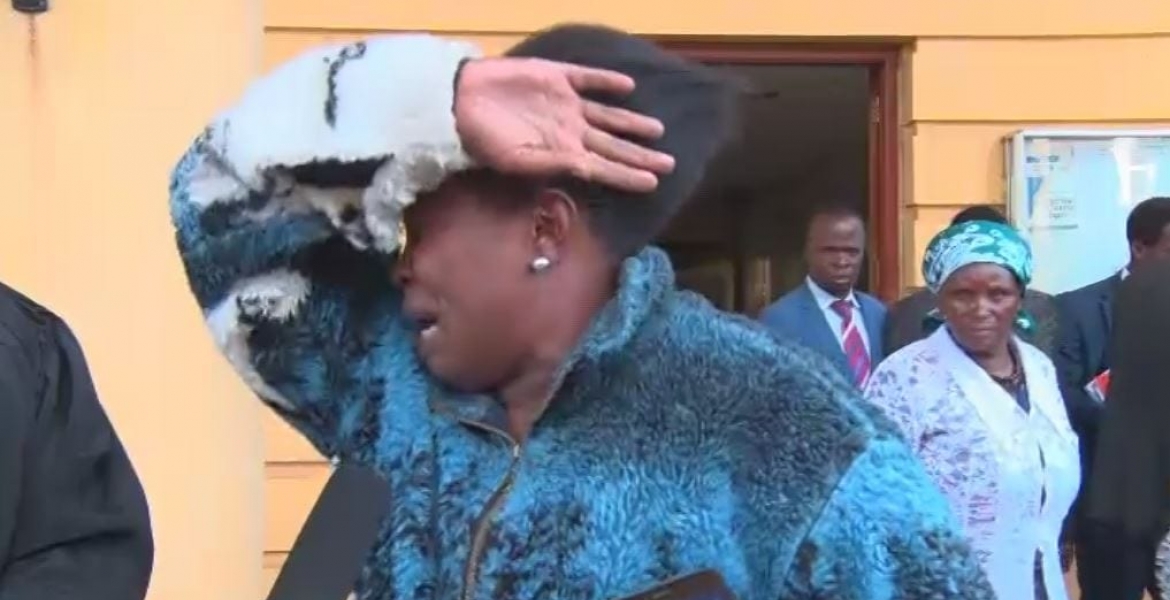 NYS scandal suspect Phyllis Njeri Ngirita has narrated her family's agony after they were charged over the National Youth Service (NYS) scandal. Addressing reporters outside Milimani Law Courts on Monday, an emotional Njeri lamented over the freezing of the family’s bank accounts and assets.

She claimed that her Class Seven son, who was previously fluent in German, has dropped out of school due to lack of fees and can only speak Kikuyu, Swahili, and English at the moment, adding that the boy was turning into a ‘chokora’.

She also said the family has been forced to use public service vehicles after their cars were seized and are now rusting away at Naivasha Police Station.

Njeri also questioned why the government was unfairly treating her family while other suspects in the NYS scandal are walking free.

“I want the President to know that we are being persecuted. My family has been through a lot. I used to work and all my money is stuck at NYS….I’d rather die or been thrown in jail than go through this,” she said as she wept uncontrollably.

Four members of the Ngirita family; Ann Ngirita, Phylis Njeri Ngirita, Lucy Wambui Ngirita, and Jeremiah Gichina Ngirita were in 2018 charged over the Sh9 billion NYS scandal. The four are said to have received over Sh400 million from NYS without suppling any goods or services to the youth agency.

Last year, Njeri moved to court seeking to be allowed to access money in her account to pay her son’s school fees arrears amounting to Sh3.4 million.

What a mockery? Farting on our face. Ngirita's used to live in ghetto in Naivasha before NYS 2. Mahunukite muno onamatiari maguta makuihata uso. You reap what you sow. When you involve all your family member in stealing you never knew you can all be killed or locked up.

Njeri, if not speaking German is what qualifies one to be a chokora, you are one big chokora yourself.
The things people use as measuring sticks...sad.

Her German speaking kid is no better than the many children who went without food after she stole NYS money!

Hers is just a fony call for sympathy! You ain’t getting none, Njeri!!

No sympathy at all. Amekula miwa ikafika huku kwa chini and its salty now. If all she sees now is how german is leaving her child, as a status thing, I can't imagine maringo ya ghetto alikua nayo when money was pouring in like water. Pembroke house school is now Shebroke house stay...

@Ngirita - the wages of sin is the gnashing of teeth followed by death!

Thousands of Kenyans have heavily cried for mercy after you conned them through NYS scam.

Your crying is similar to that of a hungry hyena after it loses a bone that it had stolen from a cub!

You can start crying in “tongues” to include crying in German!! No one is listening!!

thievery doesn't get you anywhere. HOWEVER, there's more thieves yet to see the court like QUEEN THIEF WAIGURU

....all that ngiritas is not snow.... ati magari zao ni maua Naivasha police stn.... wacha ziwe... I hear ati when they went nyamchom huko Naivasha they'd use beer to wash their hands... while talking smack. I wish this bitterness would be experienced by ALL who have put Kenya in tatters.

Why go after the small fish alternatively how come in Kenya I have never heard of plea deals all those being persecuted in the NYS scandal while the main culprit Ann Waiguru is busy with BBI bullshit should insist that she was the mastermind.Throw her under the bus am sure Uhuru can get another side dish.So what are we ordinary citizens suppose to do about your son becoming a chokora .Really in your small mind you think speaking German is an accomplishment.

No sympathy for this modern day Kamlesh. But it seems someone stole KShs. 9 Billion and threw some crumbs to these people and now they have to pay the price. I bet their frozen accounts do not account for the nine billion. Someone somewhere (Kirinyaga may be...) is enjoying a massive loot.

No sympathy for this modern day Kamlesh. But it seems someone stole KShs. 9 Billion and threw some crumbs to these people and now they have to pay the price. I bet their frozen accounts do not account for the nine billion. Someone somewhere (Kirinyaga may be...) is enjoying a huge loot.

Really, this is extremely crazy!!! What is the big deal in speaking German. Your son was able to go to German classes because you as the mother stole the money...mwizi. Is Kikuyu/English/Swahili not a language? Are we all chokoras because we don't speak foreign language? Shame on you for your Ushambaness.

@sue - anything foreign with a white man language attached to it makes her feel unique and special! Simple mind, indeed!!

Yes we know that not all NYS looters are being persecuted. You worry about your son's lack of speaking German,and your immobile cars at the police station. Let the Directorate of Public prosecution worry about who go after next. Even if he fails, this is not the end of it.We the public will remember,and when the right regime comes into power, we shall revive with vigor all the terribly dormant cases of corruption.