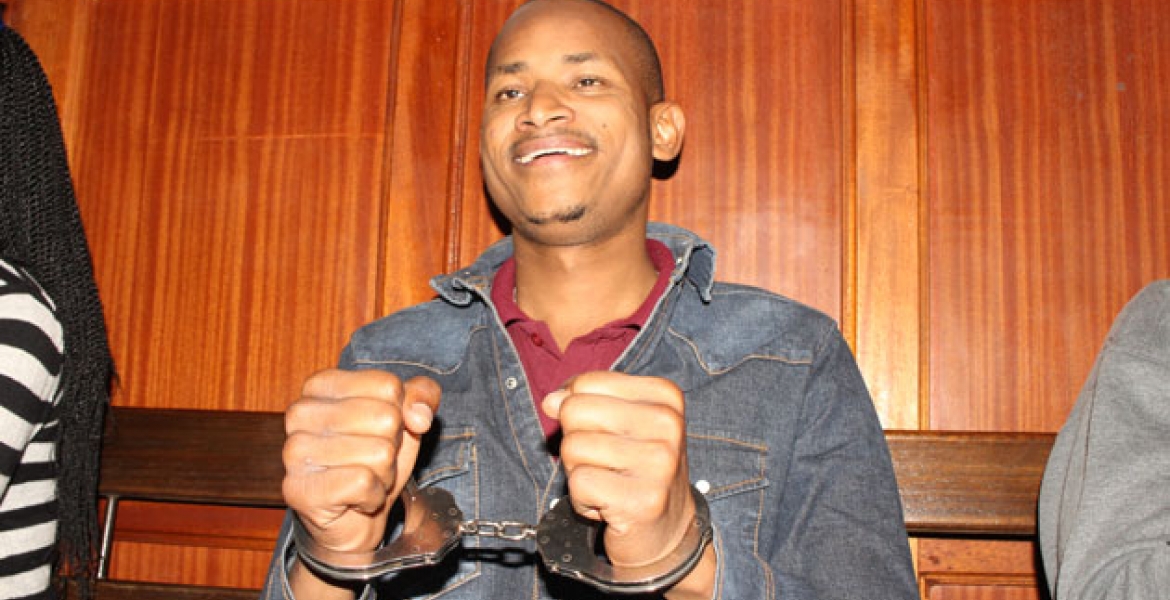 Owino is said to have shot the man identified as Felix Orinda, aka DJ Evolve, on the neck after quarreling over reasons that are yet to be known, according to police. In a report filed at Kilimani Police Station, B-Club’s security manager, George Otieno said Owino drew his firearm and fired at Orinda at 7am inside the popular entertainment joint.

Orinda was rushed to Nairobi Hospital for emergency care by B-Club’s management and Owino was arrested at the hospital, where he had allegedly gone to see his alleged victim.

“He then drew his pistol and shot the DJ on the neck. The victim was rushed to Nairobi Hospital in serious condition by the management of the club,” the report reads in part.

Owino is currently being held at Kilimani Police Station pending investigations into the incident, Directorate of Criminal Investigations (DCI) said on Twitter.

“DCI officers are currently probing the matter, and the suspect will be arraigned once the investigations are concluded,” Nairobi police boss Philip Ndolo said.

Police said the gun and cartridge Owino used in the alleged attack was yet to be recovered.

Nairobi people love voting for thugs. Shooting somebody at the neck shows that he was aiming at the head but missed.

Is this a a joke to Ongili? This is no laughing matter...This is attempted murder.This is a serious offense that carries life sentence is some countries.
I dont know this B club,but going by what the article says,that it is a popular entertainment joint,one would think that security would not allow anyone to carry aweapon in side...
He shoots someone and goes to visit him in hospital? Wonder if its genuine,or was he there to offer a modest sum of cash to make the whole thing go away...The Kenyan bourgeoisie way.BRIBE

This lad behaves like he has some unfinished emotional issues.

Exactly... most “normal” People are either headed home from or going to work!

@owino - not too long ago, you helped to pay school fees for a needy girl as you feared she might commit suicide if no body cared. The whole world congratulated you for exhibiting acts of kindness; I personally did too!

Through your kind gesture, I took up a challenge to do the same thing to a needy child. I thought what you did was very commendable; and by and large every Kenyan needed to emulate you in rendering a helping hand!

I’m now utterly confused about who you are, and what led you to shooting a man; a DJ at his work place! I don’t get it?!

Who gave you a gun without proper training to know that you do not use a weapon unless it is absolutely necessary in a mater of life and death?

Two weeks later, you have stupidly taken a gun and shot a DJ in a bar at 4 AM? How can you compromise yourself in this manner??

The man was working in the wee hours to earn a living. And possibly get some money to send his child to some school; or just honestly earn a living!

Now, you are under arrest for doing the most foolish thing an MP can do; an attempted murder.

Worse still Babu, you are foolishly gleaning like a damn child caught with a hand inside the cookie jar while in handcuffs! Are you still a role model to the youth?? I seriously doubt it!

Your actions brings me to ask you - because - only you can respond to this question - what is it that make Kenya politicians think that they are more important as compared to the people they are required to serve?

Would you consider resigning the Embakasi MP seat so that justice can be freely served without interference? You must fully understand what is at stake here; do you??

Ogili - your actions are such a disappointment to your voters, to all the young people of Kenya, and to the entire country as a whole. I’m really disappointed in you, pal!

Coward son of a #%*^. He was trying to please side chick in the wee hours of the morning and now seeking remorse for his actions. Send this coward to kamiti., let me him bring pricked in the ass and throw the key away so he can rot in hell. Bure kabisa

In the meantime Pasaris has gone wild on twitter...not giving a damn that Kenyans cannot afford care overseas like she can....not only now, but even before she was mheshimiwa... With child support of hundreds of thous a month, who wouldn't? Ati leaders.....aibu tupu.

Charge him with attempted murder, what a psycho path.

Kenyan MPs acts like they own the world. They want to prove to common mwananchini that they are capable of manipulating anyone. He should rot in jail. He should be out of office by now. Some if these Kenyan politicians are so disgusting.

Take a monkey, dress in in a three piece suit and drive in the latest Mercedes Benz, but the monkey remains a monkey. This remorseless boy should be assessed for multiple mental disorders.