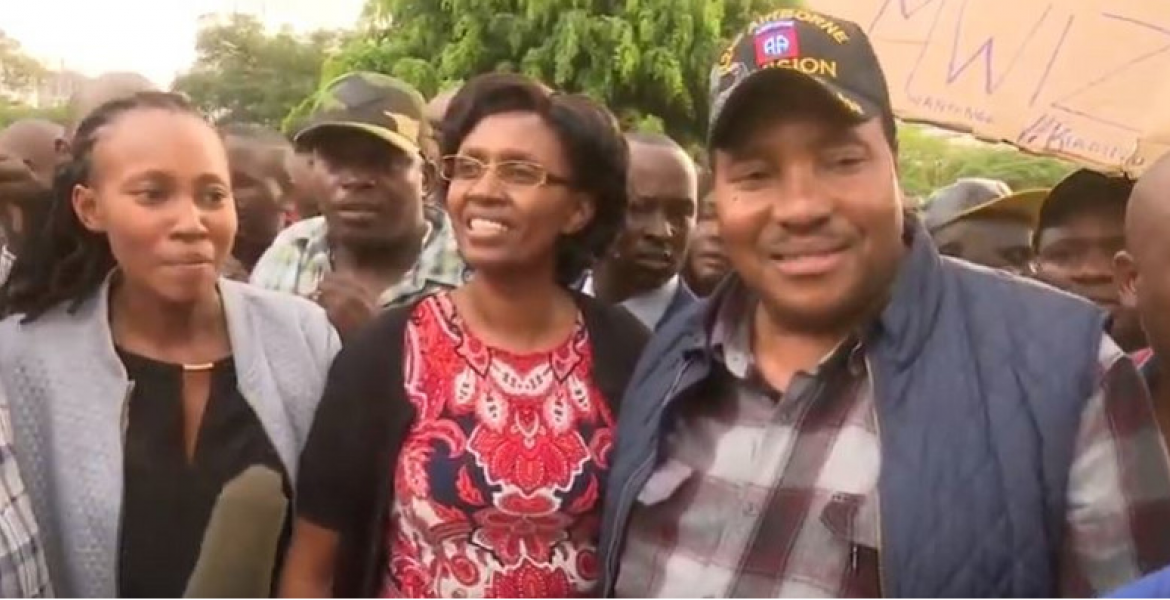 A total of KSh.18,871,398 was wired to bank accounts belonging to five companies directly owned by Governor Waititu’s wife, Susan Wangari Ndung’u and their two daughters; Monica Njeri Ndung’u and Diana Wangoko Ndung’u contrary to Public Procurement and Asset Disposal Act, according to the documents seen by Daily Nation.

Suwanga Ltd, a company that was registered on June 9th, 2017, just two months after Governor Waititu took an oath of office, was awarded a contract to construct a public toilet at the Kiambu matatu stage. Records by the Registrar of Companies indicate that Waititu’s wife is the sole shareholder of Suwanga Ltd.

Suwanga submitted a bid of KSh.3,999,835 to construct toilets and was paid the amount on January 30th, 2018, according to a payment voucher.

On November 29th, 2017, Modiba Management Services Ltd, which was registered on November 1st, 2017, was invited by the Kiambu County Government to submit a quote for the supply of 30 tyres. The company, whose Waititu daughter Monica Ndung’u is listed as its sole shareholder, quoted KSh.874,000, which was paid a week later, on December 6th, 2017.

Another company, Beedee Management Services Ltd, which was registered on November 1st, 2017, under the name of Waitutu’s daughter Diana Ndung’u as the sole shareholder, was in March 2018 contracted by Kiambu County to supply seven skip bins at a cost of KSh.1,750,000. The same company won another tender worth KSh.950,000 in October 2018 for hiring an excavator for 95 hours at KSh10,000 per hour at Gitamaiyu quarry in Murera Ward.

Connex Logistics, registered on February 14th,2018, under the name of Waitutu’s wife Susan was in October 2018 awarded a contract by Kiambu County to supply 36 batteries for grounded county government vehicles at a cost of KSh468,400. On December 24th the same year, Connex won a tender to supply 12 tyres for the county government’s graders at a cost of KSh.2,491,680, which it was paid a month later. In March this year, Connex Logistics was awarded a tender to supply 32 pieces of size 235/85 R16 tyres for a total of KSh.1,321,600.

The new revelations could compound Governor Waititu’s woes. Waititu, who was barred from accessing his office after he was charged with corruption over the loss of county funds totaling KSh.588 million, was last week impeached by Kiambu County Assembly on the grounds of gross misconduct and abuse of office.

Wow - surely Murkomen has more work to do defending the indefensible thieves.!!

And surely Murkomen is telling Kenyans the war on graft is selectively fought by the same government he is a part of, to keep the high priest of corruption away from the presidency?? Who wants a thief for a president? I beg to differ with Murkomen the Co- perpetrator of thief in Kenya!

Murkomen should tell us where the 21 billion shillings for tha dams project is?! Do you think the Kalejin community is that stupid not to know the reason they do not have dams for water supply? They will vote you all out unless they are in cahoot with their tribal thieves who fatten their pockets but always call upon the other Kales when they get caught stealing to support them! Carry your load alone and don’t ask your tribesmen to defend you when you steal. How come Joshua is not a thief among you?

We are all sick of thieves and it is the high time Kenyans rise up and fight for what is rightfully theirs! No thief will be elected come 2022, not even Ruto!

Wajinga nyinyi. This stone thrower does not know how to hide traces of the money he has stolen.

And what will Kiambu people do? Nothing, not a damn thing. If memory serves me right, he is probably more popular now! Election time they will be waiting for 500 cut for their vote...to last them 4 years.

We are idiot who accept that you can make billions from being employed by the government.

#Wajinganyinyi na Wezi pia!If there is a God, its about time ashuke Kenya, and take all the thieves to MOTO! to burn! I mean wote including Kenyatta's Family. How can you crab 5000 acres of land and chase Kikuyus to Rift Valley!Kenya imerogwa!!!