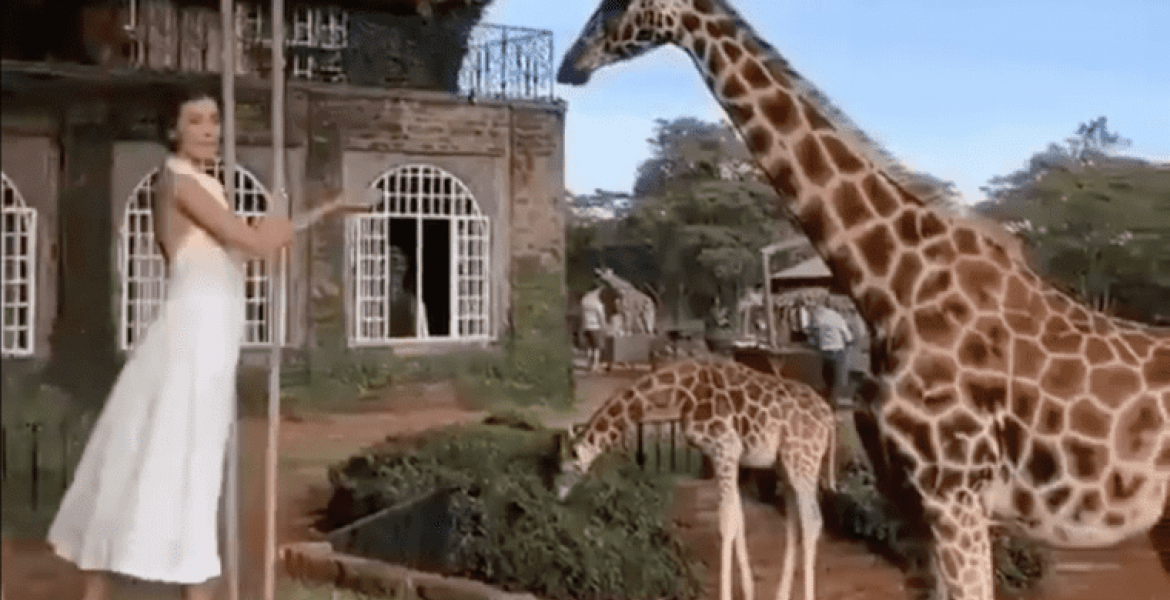 Kenyans online reacted to a tweet of a foreign tourist visiting the Giraffe Manor in Nairobi after she stated that the Kenyan capital is in Africa.

Gia A, whose Twitter profile shows she is from San José, Costa Rica posted a 35-second clip, where she is seen feeding one of the giraffes as the song Lovely by Billie Eilish and Khalid plays in the background.

”Hello Twitter world, hope you all are having a nice day. This place: Nairobi, Africa,” she captioned the short video.

Kenyan online users flocked her comment box to remind her that Nairobi is in Kenya and not Africa while others wondered which Nairobi she was in.

“Another Tweet to be reminded we are using the wrong Nairobi,” a user named Nyawira said.

Sewe Saldanha noted: “Again, which version of Nairobi is this?…do I need a visa to visit this Nairobi?”

Kitonga Ngei quipped; “I need to upgrade to this version!!”

Moraa Mageto tweeted: “Nairobi is the capital city of Kenya. Kenya is a country in Africa. Africa is a continent.”

The Giraffe Manor in Nairobi was listed among one of the greatest places to visit in 2018 by Time Magazine’s with rates starting at $565 (Sh56,500) per person per night.

Ignorance has NO defense,

Wananchi wako idle kweli. Kwani does Nairobi stop being in Kenya because the tourist has failed to mention that?

Agreed. This is time that could have been spent fighting corruption kweli. Why do Kenyans get so butt hurt over small shit????

Kenyans on Twitter need to get a life! Why are they harrasing a visitor to our beautiful country? Nairobi is indeed in Africa. I'm sure not many KOTs can name 3 cities in Costa Rica. Give this lady a break and stop hating!

Hey, please don't throw your temper tantrums on this lady. That's as far as she knows: Nairobi is in Africa. You may have experienced the same from all Americans, apart from those who had at one time served in the military. American curriculum do not expose its students to geography subject during their early years in school. Its only in college when they have their first taste in geography. Many a times they have innocently claimed I came from a place called Rwanda, Kenya. They even have heard about other American states, but ask them to locate them on the map. Hush! In primary school, I knew how to locate towns, lakes, rivers, mountains etc in Kenya and Africa, and about farming in Holland, Switzerland, the Rhines bra bra bra. In secondary school, North America, Europe, and South America. In high school, I took North America region in my study, so the Appalachians, Rocky mountains, the Prairie, maize belt, wheat belts, Great lakes, Rivers Missisipi, Missouri, Niagara Falls etc. Even before I landed here, I had a clue about America and Canada. For Americans especially nyeuthis and red necks, giza tupu.

True That! Mjuji, one will only realize the ignorance ya Jungu once you live amongst some of them. Before one travels Majuu you'll never be able to tell, we just think that they are All smart.

yes so what? fight corruption with similar vigor