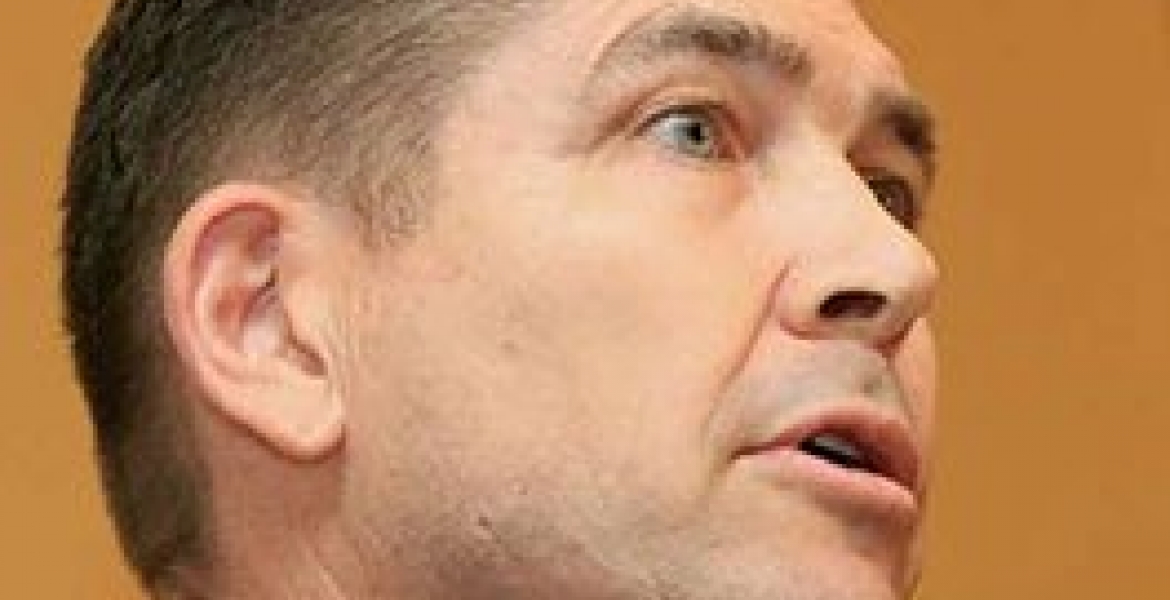 US Ambassador to Kenya Kyle McCarter has cautioned Kenyans against voting for leaders implicated in corruption.

He lamented that corruption has been normalized in Kenya such that the electorate appears to give power to individuals with the hope of being given handouts in return.

“It seems normal in Kenya for someone to offer you a bribe or share crooked deal and it goes without being condemned,” said McCarter.

McCarter, who spoke in Kakamega County on Saturday, said it was unfortunate that leaders accused of corruption and serious economic crimes are easily elected to public offices than Kenyans of impeccable records.

“We are nurturing the young generation into a bad nation. We are making them think that taking something that is not yours is not bad,” he stated.

“We need to take the war on corruption seriously, punish thieves who steal from the poor to make themselves wealthier. It is time they stepped aside,” McCarter added.

While reiterating US commitment to helping Kenya fight graft, McCarter also condemned communities for protecting individuals accused of stealing taxpayers’ resources.
He said Kenyans, who bear the brunt of corruption, must take an active role if the country is to tame the vice.

“We should not allow an unethical culture to invade on our public space, communities should stop protecting their people who engage in corruption,” he noted.

Please Mr ambassador,you are trying to do good to people that were born by thieves and those theives were born by other thieves, it's a generations to generations, Kenya is not America where a kid in kindergarten will find a lost pen and take it straight to the teacher, a Kenyan kid will just put it in his or her pocket without even thinking hard, that why you see pick pockets on the streets and nobody addressing this problem,Mr Ambassandor,the corruption in Kenya is in the blood streams of the citizens,how many cases you have heard the Kenyans in America are still getting the same trouble, stilling from the elderly kitty, social security, until the they charge from the bottom your from up bottom, there is no good coming from that country,IAM with President Trump's word's,he painted a good picture of whom they are

Youare not saying this sweet words to a representative of the master of corruption are you. Using taxpayer money on his hotels and resorts isn't corruption to you and that's just the latest. Or is it him you meant when you talked of a thief who is son of a thief?.

@Suzan Smith, You wrote down all what Mr Smith smells when he stretches your legs in that trailer park you reside.totally rubbish and please shut all your holes ,full stop. ( sorry PERIOD!!!)
American ambassador cannot tell Kenyans who to elect or who should rule,He is a diplomat who can be kicked out of kenya anytime if he keeps running his mouth about Kenyan government uncontrollably ( honorable Daniel Arap Moi did that way back in 1990s, Way before you knew how a tampon look like)
Corruption is a serious global case with America being the number one on list, just like terrorism or gross human rights violations . Kenyans leaders are mere petty thieves who grew up without seeing a dollar like you, got educated in foreign countries then went back home to steal all what they can so that they can equate economically with their american counterparts.
Lastly be adviced, whether you take all Kenyans in diaspora (including you and Smith),ship all of them to make kenya better again, I guarantee they will do exactly what is happening now (stealing for personal gain).

Kikuyu Wamujomba you little piece of early morning shit. How can you address a woman as if wewe ni mbwa ilikuzaa. You have some serious issues describing a woman's privates when it doesn't even call for insults. Didn't you come from the same hole, probably even more stinking than Susan's ama wewe ni kunyambwa ulinyambwa? You fucking piece of shit. Look down between your legs and if there's a kengele there (most likely a tiny one) then you should talk like a man. Sijawahi sikia mwanamme mzima akiambia mwanamke hamjui hivyo. Na kama una kuma inakungojea nyumbani, chunga sana Karma isiigeuze ikakuwa kama vile umedescribe ya Susan. Or maybe unaelwa sana kuma zinanuka? Afterall, you Must've put your nose inside a stinking pussy to know a stinking pussy. Peleka makende weak mbali sana. Na uheshimu wanawake wewe ghasia!

Wow, Heshimu, you've spewed more regarding the nature of that kuma more than the guy you're castigating. Pole mama!

Corruption and Thieving in Kenya is a Generational curse conceived and birthed in the Jomo Keyatta era. Hence: Not yet Uhuru.

That's quite a stupid thing to say. Corruption, thievery etc are not genetic traits any more than saying dumb s**t is, otherwise your kids are in trouble. It's the normalization and general acceptance of corruption over 50 years stoked by electing those who promise to make sure their people will feed at the trough that has led us to where we are today. Once elected these thieves limit the circle to family -see Kiambu and Kirinyaga governors - and as the old saying goes lather, rinse repeat.

He reminds me of Smith Hempstone who not only kept Moi era on its toes but also venture ate Nyama choma with common Wanainchi.

Mr. McCarter, your words are soft and smooth but your actions are not. The other day, you stated you had denied Kenyan corrupt leaders and their families visas to the US. This is really nothing since they can travel to all other countries around the world however,
if you want to give real service to Kenyans, provide that list of corrupt officials. Anything else is propaganda to elevate yourself to a higher or superior position among Kenyans.
Sonko and other corrupt leaders are your buddies in dining and wining but now that he has confessed he has been a thief all along, you are trying to preempt and distance yourself from him and all others of his kind.
Mr. McCarter, had over the list of the corrupt officials that you claim to have to the Director of Public Prosecution (The corrupt Kenyans that you threatened to bar from visiting US) or stop pretending to represent and help Kenyans but rather be what you are suppose to be- An American Ambassador representing the American interests.

Kenyans did not vote for them.
The elections were rigged.

All those so called Ed are imposters.

Kenyans never voted for Uhuru Kenyatta- they don’t like him and he’s an imposter too.

If you are truly serious., apply pressure to some people that I will not mention., the are alleged owners of vast lands that were illegally acquired., we have others that acquired beaches in Mombasa and kicked out kids from their school by use of force., I am sure you have read our deputy Chief Justice was mentioned in scandal yet still remains on the bench., what about leaks from Akasha brothers why can’t we extradite this folks to US so they can face a day in the courts. The list to include waigurus, kideros and others is just shameful and may the wrath in cancer continue to clean up this evil...

Mr makatha or makwacha u have forgotten u were sent to kenya as abadada by a thief president who don't pay american taxes n u dare come to kenya n lecture us.U come from a country where they have invaded countries like iraq,syria,libya killing innocent women n kids destroying their livelihood because they refused to kiss yr asses?N u dare call our leaders thieves yet again u have caused genocide all over the world??Please how i wish i was president i could have summoned u n deport back juu ur not doing yr job as an american abasada.Shut yr stinking mouth mr

Some words or name calling describes who you are,so wamuchomba I believe everything you wrote resemble your character,the way you talk tells shows how shallow minded you are, people like you make Kenya worse, people like you just waiting for handouts from politicians instead of calling a spade a spade,you cover the bad things going on in Kenya and you are gaining nothing,for your self gain you try to threaten people with your sticking mouth so they don't talk,we just leave you to talk and mess our country that we love, take this to your bank if you have any, I will be together to fight for a better Kenya for all to taste the Kenya cake,I urge wanjiku wake up and elect the readers that will make Kenya for all Kenyans, period

Susan no one here is blind to corruption in Kenya. Stating that it is genetic in nature is something white people do and foolish at best. If you study a little bit of history, you can find that corruption was introduced to kenya by whites and Asians
https://www.standardmedia.co.ke/article/2001320902/how-nairobi-city-was…
White people routinely committed murder in Kenya with impunity, and have for centuries routinely participated joyously in genocide, lynchings, mass shootings, started more wars, stolen more land, broken more treaties, pillaged more artifacts, enslaved, imprisoned, detained and killed more people than any other racial group. I can get you links if you want more. And yet no one ever says that this murderous, sociopathic, rapacious, warmongering behavior is genetic. Would you apply the same standard to them as you do to us?