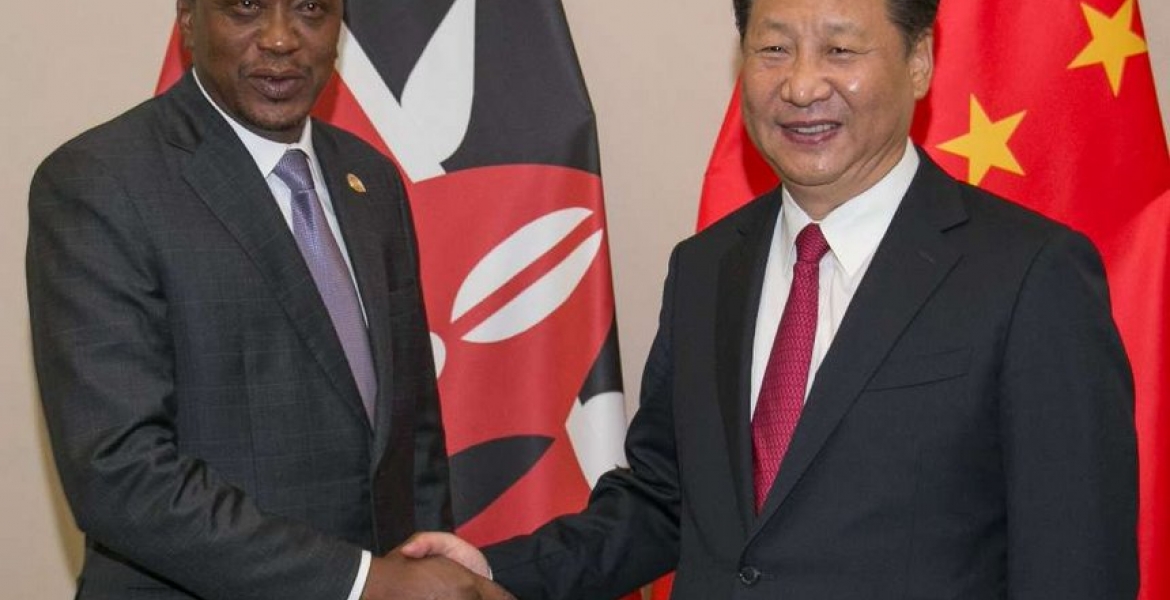 Fresh details on how Kenya’s key strategic assets were used as collateral to secure loans running to billions of shillings from China have emerged.

In a report, the Daily Nation says that the prime assets are currently exposed and will be seized by China should Kenya fail to service the debt or breach any terms. The Daily Nation mentions the more than Sh200 billion taken to facilitate the construction of the Standard Gauge Railway (SGR).

“The initial agreement for the Mombasa-Nairobi railway signed on May 11, 2014, also details how the pact will be governed by Chinese laws with all disputes being arbitrated in Beijing,” Daily Nation reports.

The publication also notes that there is a confidentiality clause barring Kenya from making public details about the SGR contract “without the prior written permission of the lender (China).”

“Without the prior written consent of the lender (China), the borrower shall not disclose any information hereunder or in connection with this agreement to any third party unless required by applicable law." The contract reads as quoted by Sunday Nation.

Earlier reports indicated that the Port of Mombasa was used as security for SGR loan but the latest report by the Nation shows other assets are at risk too.

“Neither the borrower (Kenya) nor any of its assets is entitled to any right of immunity on the grounds of sovereignty or otherwise from arbitration, suit, execution or any other legal process with respect to its obligations under this Agreement, as the case may be in any jurisdiction,” the Sunday Nation quotes Clause 5.5 of the Preferential Buyer Credit Loan Agreement on the Mombasa-Nairobi SGR.

The contract was signed by National Treasury Cabinet Secretary Henry Rotich for Kenya government and Li Riogu, then-Chairman and President of the State-owned Export-Import (Exim) Bank of China.

“In the deal, Kenya is also compelled to import goods, technology, and services from China,” says the Nation.

The contract also states that all disputes regarding the SGR loan will be heard in Beijing through the China International Economic and Trade Arbitration Commission (Cietac).

“The Exim Bank also makes it a mandatory requirement that the commercial loan is insured by the China Export and Credit Insurance Corporation (SinoSure). All charges regarding the management of the loan, which run into billions of shillings, are to be paid by Kenya,” the Nation further reports.

In a roundtable interview late last month, President Kenyatta rubbished claims that Kenya may lose Mombasa port to China over debts as propaganda.

"There is nothing of the sort in our contract with China. The port is safe and whatever is being said about that is propaganda," Uhuru said, adding that "the Chinese government has itself confirmed that there is no such clause in our agreement."

The story is saying the Chinese can take any assets.

The Kenya government basically surrendered the all assets in Kenya to the Chinese.

Tell me if that is not insane!

CS Rotich and everyone who was involved in signing that document must go.Its that simple.

CS Rotich should also be charged with treason.

What's ANNOYING here is that “In the deal, Kenya is also COMPELLED to import goods, technology, and services from China,” says the Nation.

The truth is slowly leaking out from the sinking ship that is jubilee. Borrow and loot for overpriced projects.

The boy in statehouse said he can release the loan documents. What is he waiting for? As usual waiting for new scandal to overtake this one.

Is this why they want to introduce teaching the Chinese language in Kenyan schools.It was part of the terms and conditions?

They got conned by the Chinese. What a bunch of idiots.

Bingo! You nailed it.💪

For the same reasons, Kenya can also loose its assets to the EU, USA and UK. But that is not shocking, it's old details.

My understanding of the Constitution is CS Rotich cannot sign the sovereignty of a country without public participation.

Am waiting for Otiende Amollo to explain this from the constitution point of view.

This Chinese con game is about to get neutralized.

Just know that Chinese are not stupid and what they are doing in Africa is pretty much neocolonialism. The whites and the Asians can NEVER save Africa, they will exploit us. The Africans have to save themselves. Sadly the africans are signing catastrophic loan contracts that will bring us to our knees. Read what Chinese has done to Cameroon.

Just like that,Jubilee surrendered our sovereignty,minds and soul to the rising Asian Tiger.This Tiger is looming in the horizon and will not even spare our dogs leave alone our collateral assets.Mr President, when will Kenyans hear your version of this debt-trap diplomacy that you recently promised? Or is it yet another hand-shake Kenyans are clueless about?

He got NO presidency to SURRENDER, none! The people version of the Presidency was forcefully taken by Raila at Uhuru Park on Jan 30th 2018. And Just like that, Raila went home and slept like a baby!

You take money from the MOB, you don't pay that back,they fuck everybody in your family including yourself.So drop them.

In a game of paka na panya the out come is pretty much obvious. Kenyans should demand from the president -a full and complete disclosure of the loan agreements/ contracts between Kenya and China. we're tired of being anxious and fearful of what humiliations and damages China may assert against us under the terms of these loans. Since Kenyans will pay for these loans, we've a right to know the terms and burdens of our obligation. Where are: NGO'S, civil society, activists, law society of Kenya church organizations and all those who claim to stand for Justice and fairness? If we know the truth, we can act accordingly and set ourselves free. By the way, what if our so called elites, leaders, Dynasties, and Handshakes didn't read the fine details of the contracts with China? God help and bless and save Kenya.

The government needs to come clean on the Kenya-Chinese contracts before they subject our children to a foreign language ( Chinese). Kenyan's must reject being re-colonized. According to Carl Darling (1916) article in the "American Political Review" " A people without a language of it's own is half a nation"
"Language is one conspicuous banner of nationality, to be defended against encroachment, as it is the first object of attack on the part of a power aiming to crush out a distinction of nationality among its subject peoples......".
Our leaders and especially in education need to explain the purpose of Chinese language in our education system. We need to know why they are allowing China to crush and destroy our people in the name of loans. Language is a human right and should not be imposed. What our leaders are creating is Mau Mau war number two. Kenyan's must say no to Chinese language.
God give Kenya leaders not politicians!God help Kenya!!!

FINE PRINTS!!! NO ONE READS THEM.I MEAN NO ONE.

I told you so. The fat cats sold us out. Sold out to the Chinese government. Things are critical. I am sounding the SOS to those folks within my voice. This is not going to end up very good. We are forced to import inferior goods. Now we have to learn Mandarin??????? For God sake I thought we were Kenyans. Are they teaching swahili language in their schools. Negative. I would be extremely concerned about these debts. Very dangerous development when it comes to repayments. The fleecing of Kenyans continues.

Hehehehe n the haters of progress continues to yap n vomit venom because sio wazungu wao wanasaindia kunjenga kenya yetu.Wazungus wamerukani bado wanaendelea kuskia vibaya china wakipewa makadarasi makubwa.We had this idiotic colonialist imperialist like worldbank,EU,west for long time but did nothing to us only Facking AID,diseases,poverty increased while they watched.So warelax wanjionee chinese transforming kenya juu they had their time but did nothing???And i have said it here if chinese happen to take something over juu tumeshindwa kulipa so be it.Most of you blacks wazungus commenting have bought houses n financing cars through bank n what happens when u fail to pay????The banks will take them over!!!N how comes the loans which we have taken from EU is not generating the same hit like chinese ones????Haters haters wazungus spreading bullcrap nonsense.Bure wao

Mr. President what is the position? we cannot wish this thing away. Explain to your people in simple terms what this means for us common wananchi. I grew up at a time when wazees could easily "sell" shambas through accruing deni from village shylocks. When rumors were rife in the village about the impending auctioning of shamba due to deni in terms of local brew and nyama,the Mzee would vehemently deny. When the threats from shylock becomes real,the mzee pretended to be selling the piece of land. Unfortunately no one ever go to see the said payment money. Out of shame and frustration the mzee turned anger on his family, chasing the from their homestead. His grand plan? marry afresh to a younger one who knows not his shame and folly. Moral: we do not want to be ridiculed by the world in future over our appetite for instant gratification at the expense of our Canaan.
Or another shortcut as in Things Fall Apart "Unoka laughs at Okoye and points at his wall, on which he has marked down all his debts. He owes a lot of people a lot of money. He snubs Okoye, saying he means to pay off his big debts first (because he’s in major debt) and Okoye is forced to leave empty-handed.
Get even a bigger debt from the West!

Very naive criticizing China for lending money, building monumental infrastructures and many other projects that have awoken Africa for some sort of return to China. Remember the West have left indelible scars of exploitation under the pretex of some soft loans and financial aid to the poor african countries. Aid that is meant to protect human rights by accepting anti-
African cultures, Yet they continue building hi-tech military bases and embassys to protect their interests. Sorry! Beijing all the way.

" To speak is to live for another".
Kenyans we have lived for the English, let us and posterity not live for the Chinese but live for ourselves (Live for African languages).

Well. Choices have consequences. You invite a pig to your bed, expect to lay in filth. Like y’ll never knew of the corruption and addiction of the thugs y’ll elected to lead y’ll. My advice jipange to survive. these scumbags are in too deep n they’ll never change even if they wanted to.

@mume nyumbani u have nailed it to the head n let the jungus n his followers read it.China bravo bravo.It takes me 15 minutes to get to town using southern bypass from kikuyu town n it use to take us more than 2 hours especially ukishikwa na traffic bran kinoo,westlands n am ready to pay the toll to repay the chinese loans?I cannot wait the one from Gitaru via wangige to nairobi to start 4 lanes on each side.Bravo bravo chinese.What kenya or Africans needs is not Aid or soft loans bullcrap.