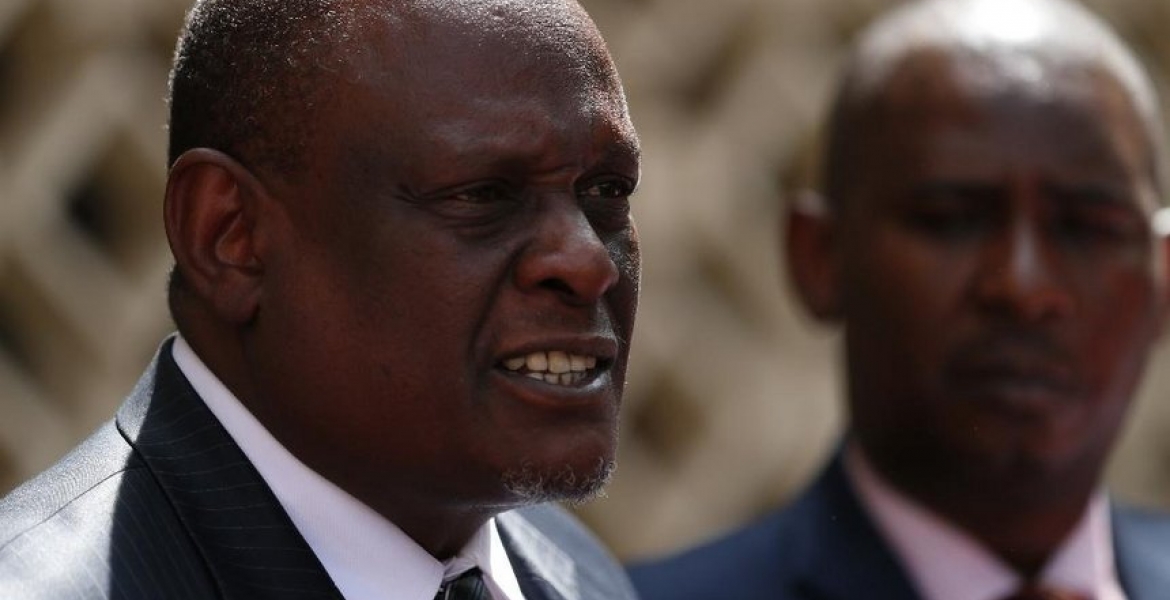 Jubilee party vice-chairperson David Murathe has announced his resignation from the ruling party.

In an announcement on Sunday, Murathe cites his bid to block Deputy President William Ruto from running for Presidency in 2022 as the reason for his resignation.

“I now find that it is no longer tenable to stay on as the party vice-chairman, given that I will have to sit in the same National Executive Council with a man I am taking to court to block from running for president,” he says.

Speaking during a media briefing in Nairobi on Sunday, Murathe says he will seek the Supreme Court's interpretation on whether Ruto can run for President in the next election having served two terms as Deputy President.

Two weeks ago, Murathe said there's no MoU between Ruto and the Kikuyu community to support his bid for President in 2022.

“We have no MoU with anyone that we will support them in 2022. If he has any deal with Uhuru Kenyatta, then that is an agreement between the two of them,” said Murathe referring to Ruto.

Murathe maintains that Ruto should retire from politics together with President Kenyatta in 2022.

Ruto MUST GO! It's the moral thing to do for the sake of the country.

Murathe's case is that of madness gone wild.True you may not like/support HE DP Ruto but for heavens sake offer logical arguments against his candidature.I wrote here before when it was said that the president wanted to appoint the railas/kalonzos and such to government by sacking serving CS.That is dumb and stupid.He can appoint/support them to serve as reps. at international places but not in the running of government.The president is playing with fire and the sooner he sobers up the better for the country.You do not bring peace by rewarding those who do not believe in fair competition/thugs who are ready to burn the country so they get their way.The only legacy Uhuru can leave is ensuring proper/fair/credible elections where the losers go home and do not kill any Kenyan child as done last election.If Uhuru thinks he will play games with his deputy just because he has used him and his people to get elected "THREE TIMES" he is in for a shock! First Kikuyus will not buy his bs of betrayal and will not support his "new found entitled friend".Politics is about class! Uhuru needs to have class! You have three years to go and will need your deputy to pass your agenda.Rift Valley cannot do with another sequence of cheated population.These people thanks to DP Ruto have come out to vote for you en mass for three elections and the least they expect is that you respect that sacrifice and play fair.Granted you cannot force anyone to vote for Ruto but for the sake of God do not play games with peace!The sacrifice your DP has made means something- he has been the guarantor of peace in RV that is so key to so many of us and our families.The murathes will retire to the "comfort of Murang'a" as pawns in RV die as has happened in other elections.How ingrates like raila/kalonzo are more important to us/you is beyond me.They are laughing their tails off as you make a fool of yourself.No one is so important that people must die so they get their way! They have never apologized for the undemocratic antics of swearing themselves.And so i beg you-reign on the murathes/tujus- they should be out of office yesterday.Speak out and distance yourself unless they act for you from such crass utterances that are calculated to plant hate/resentment.You are better than this.This from one who has supported you all years on this forum from those days of ICC but must be shocked that you may betray my trust in your judgement.

Hopefully you have a plan B to pursue the grand agenda. Hopefully you have resigned not in bowing out but to strategize for a better outcome.
Hopefully you have not been chopped off by your party, only to dance like a headless chicken reminiscent of most kyk leaders of recent years.
Murathes-kurias-ngunjiris are addressing the elephant in the room. We may wish to dismiss them as fighting phantoms, but they have been to the mountain top and they see what will rise up like letters of fire on a dark sky.

Murathe got his two weeks of fame. Most of us have never heard about him before he opened his big mouth. Mudavadi might make him his running mate.

Murathe is out to splinter the Jubilee party to the advantage of ODM. He must have been promised either a prestigious position or lots of money. We will soon find out. Watch this space.

What I gather here is that Murathe is out to safeguard interests of the Mt. Kenya region. That's all he's interested in. But why is he so afraid or Ruto? When will these tribal politics ever end in Kenya? Siasa za kuturudisha nyuma. Kwani Kenya ni ya wakikuyu pekee? This is utter nonsense.