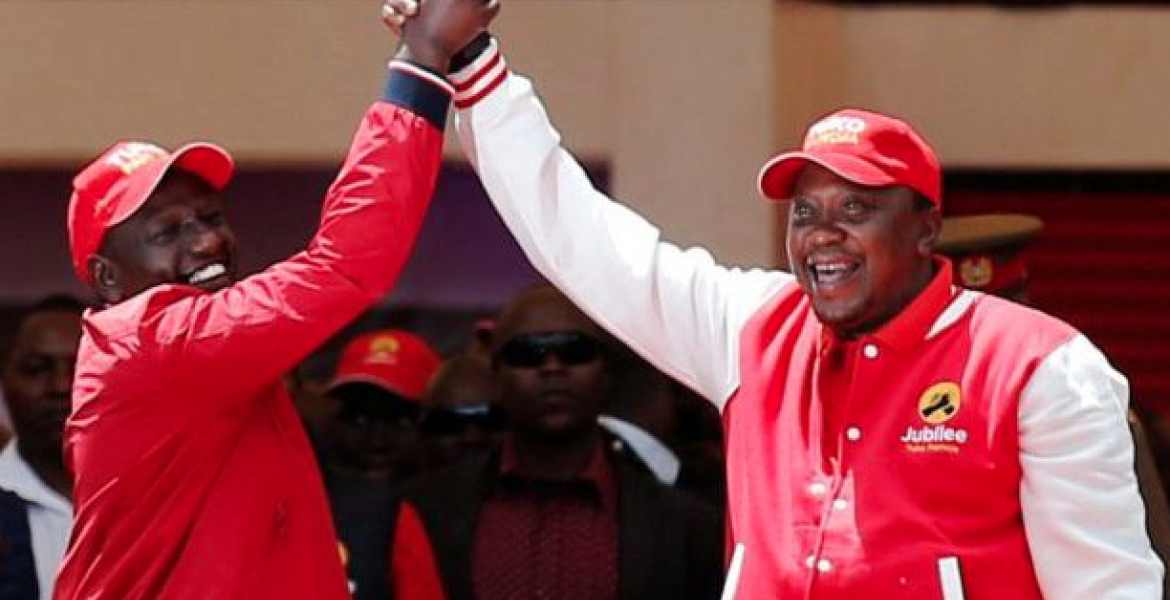 The Kalenjin Council of elders says there is an agreement between Deputy President William Ruto and the Kikuyu community over 2022 presidential election.

The elders say President Kenyatta and Ruto entered into a pre-election pact in 2013 that would see Kikuyu community back the Deputy President's bid for Presidency in 2022.

Led by the council's Chairperson James Lukwo, the elders say they fear a repeat of 2007/08 post-election violence should the Kikuyu community renege on its promise to support Ruto in 2022.

"As a community, we feel there is a lot of hypocrisy in the agreement and we ask leaders from central Kenya to come clear. We want to know if they have decided to dump us. We are concerned as elders because we don't want a repeat of 2007/2008 post-election violence," says Lukwo.

Lukwo further claims that elders from the two communities held a series of meetings in Nakuru and Eldoret in 2013 where Kikuyu community pledged to back Ruto in 2022.

However, the Kikuyu council of elders says no such meetings were held and the community doesn't owe anyone a political debt.

"There was no such meeting because we do not wish to mix ourselves with politics. We are focused on fostering unity," Kikuyu council of elders Chairperson Wachira Kiago says.

"Clearly we must revisit this 2007 and 2008 skirmishes issue in 2019, and get closure on it. We cannot keep getting threatened by some Kenyans with the repeat of a past that they insist was spontaneous, for votes. It’s unacceptable," says Wambugu, a fierce critic of Ruto.

Two weeks ago, Jubilee Vice-Chairperson David Murathe said the ruling party and the Kikuyu community have no MoU with Ruto over 2022 elections. Instead, Murathe says Ruto should retire from politics together with Kenyatta in 2022.

“We have no MoU with anyone that we will support them in 2022. If he has any deal with Uhuru Kenyatta, then that is an agreement between the two of them,” said Murathe referring to Ruto.

“We Mt. Kenya community don’t have an agreement with DP to support him in 2022, unless it was between him and President Uhuru Kenyatta, he should prepare to go home,” said Murathe adding; "If you (Ruto) have led with Uhuru for two terms, what else do you want."

what kind of nonsense are we preaching here. A leader should be elected by merits of doing a good job. This man has done nothing but enrich himself. It will be a political death row and death for the country to elect this man.

If Kalenjins think Kimuyus will Vote for Ruto for President: They're DREAMING.
1. Kikuyus are Users😎; they've used him past "T" in R.U.T.O. And they ain't turning back; for Greed is not just Greed; it's a Vow; and a👹Curse.
2. Kikuyus REMEMBER👼the KIAMBAA (Kiambu) massacre in Eldoret.
3. Presidency in Kenya seems to UNFIRTUNATELY be all about "Mundu wa Nyumba".
4. Moi is Ruto's frenemy; so Ruto👺go figure.
5. Corruption, CORRUPTion, CORRUPTION!!!

First of all this so called James Lukwo must be arrested and charged accordingly for inciting Kenyans. Secondly, Kalenjins are so fed up with Ruto right now due to the recent Maize Scandal that ribbed off RV farmers real bad. No one has been paid for the produce except Ruto's wife and son, Murkomen and the cartels. https://www.nation.co.ke/news/Probe-Ruto-s-role-in-maize-scam--say-MPs/…

Between James and murathe, who should be taken to court if not muradhe/the. Who picked a community if not muradhe thing. His remarks were lethal. James is simply saying the reactions from cheated community. Even Jesus reacted after he was betrayed by his own disciple.

Elders stocking fear under the guise of concern. Beware. If their man did not go stealing anything he could find he would be having the votes. Stealing, scandals, hanging out with murderers and tear gassing kindergarteners were never part of the agreement. He was never born to be DP. Someone voted and made him DP.

Stealing or no Stealing: Kikuyus won't Vote for Ruto👺.

No doubt one of the most corrupt individual in the country. He has amassed billions through shady deals. Now the so called elders are stoking fear among the citizens. Shame, shame, shame. Am not going to vote for this corrupt individual. Not now, never. These kind of politicians ought to be indicted for being godfathers in corruption not rewarded in presidency.

See, my own (Gikuyu Community) is and has always been used as 'Pawns' by our own Self-seeking selfish politicians and power-brokers. We been used as vote generating tribe every election period then dumped. We been used as collaterals during mkate-nusu,hand-shake and in all other forms of so called power-sharing meme deals. We lag behind in national development agenda while other communities are getting their priorities right in mstari wa mbele.The common Gikuyu is suffering in hopeleness and poverty. The so called Gikuyu Elders 'fronted' by protruding tummies don't represent my view. Do they even conduct polls to understand what views majorities of Gikuyu people need to be represented???They have lost focuss and therefore need to be disappointed by getting fired!

There goes the the great Rift valley crackin....

In this case:Who should fear? The Kalenjins or Kikuyus?

Come 2022, Kivutha Kibwana for president and Matiangi for VP. I am ready to start harambee!

Ati Kalenjins wana ogopa? LET US BE VERY VERY HONEST! In the history of Kenyan Skirmishes kuna watu wameuwa wengi kuliko wakalenjin? Na msiniambie mimi ni mkabila. I have seen it first hand with my beloved family in Molo and in Kericho. Watu waachange kuchezea watu. Wakale wenyewe wanajijua. Ruto apeleke ujinga mbali sana. Where I stand, Hata Raila na Uhuru wote waende Nyumbani. If we Will Not Fix That Beloved Country of ours Now, Wakenya Wenzangu, things may look good now coz most of you reading this are in the diaspora. But Tutakuwa Matatani, Na It will be too late. Mnacheza na watu wamekula kiapo ati hao tu ndio wataongoza nchi. This is ABSOLUTE NONSENSE! Amkeni Wakenya!

Hehehehe kikuyus don't get intimidated easily the way kalenjins think??We fought n dealt heavily with the british evil colonialist head on n they had modern guns,vifarus n yet we kicked their asses so just because 07/08 happened it's not a must we vote for Ruto.Jubilee party will hold delegates elections n if they vote for Ruto he will have higher chances of bin the president.Otherwise if any war wr ready 2022 to fight it head it.Kwani iko nini.World war 1/2 came n left so haka ka 2022 nikadogo sana bana if pple want it.By the way reaserch who were died more 07/08 btw kikuyus n kalenjins ???Sipendi war/tribal politics but if war starts wr ready to fight on.

Your thought process is skewed and distorted i must say. There is no sober justification to see anyone prematurely die. Be at war with your vices, at peace with your neighbors, and let every new year find you a better man.

Fear? really fear? NCIC do you take note of this cunning stoking of fear and thin veiled threats?
ICC, this is your genesis of what led to 07/08. Thin veiled threats to a section of the population by another. No one should be held at ransom to vote in a particular way.

Kenyans need a course in civics to understand democracy.

Meanwhile where is mlevi #1 alias tusker badala ya kazi

Unless you've lost your moral conscience, there is no justification to condone diabolical and self centered people like Rutoh. Comparing and contrasting them doesn't equate to a right. We all have a moral obligation to fight for the good of our country, hata wakale wamechoka naye!

Those making threats need to be arrested. Period.

the elders are simply telling us it's either Ruto or skirmishes. something should be done.

The big question, where is Mr Kapalo ama he lost his job nahatujui

what's happening in Kenya currently is called"the game of thrones" for those who may not know...those existing dynasties don't want an emergency of a new dynasty..kikuyu community has been betraying other communities politically a every time an agreement and a pact is made... history has it all..if you don't want to kill the political Future of the young kikuyus then stick to your promise and support Ruto as earlier agreed..I being part of My.kenya East youth leaders can assure you that we as Meru community will not be in your betrayal camp any longer because as you have always betrayed others of when a merian stands you will never support..more to come ..# expose the betrayers

Politics is a game, if played nicely, No injuries.. If played badly,, casualties.. All Kenyans are good people.. I hate this idea of attacking other communities and looking down on them.. Love is needed... Lets not talk negative about President and Deputy president... If you have issues, go to statehouse... Election in Kenya is like Betting... The first game, Kikuyu won the 1st goal, then kalenjin made a GG by Moi.. 3rd Goal Kikuyu by Mwai,, 4th goal Kikuyu by Uhuru,,, now who is Likely to score fifth Goal? Ofcourse Kikuyus will Bet for themselves... But lets accommodate others.. Don't incite others on tribal lines.. Deputy president is a good Man.. Whether he goes for presidency or not, He remains good.. He is loved by not only all kalenjins but many other communities

DP Ruto should be grateful he is No. 2 in Kenya. He should stop forcing himself on Kenyans by threatening Kenyans with violence.

Kenyans cannot do without DP Ruto who has grabbed a lot in a short time.
DP Ruto should realize he is luck to be where he is and know ICC forced him and Uhuru to work together. He had no choice but to work with Uhuru in order to survive ICC indictment.

ruto will corruptly buy me, no he will not be allowed be ma President

why do we accuse Ruto of corruption? how many corrupts deal do u think the Kenyatta family has done since independent, ? what about the Odinga family? the moi family? n thy just want to remain in power to safeguard their wealth, when will Kenyans come together n wipe all this, ? how long shall we be under this families? u just take a 100 by 100 piece of land that Ruto has bt u forget thousand of acares owned by this families, style up Kenyans,

To me, this is a country that I love,, I know I will vote but my neighbor will always be my best friend,,,, whether Kikuyu or kalenjin,,,,u r my Kenyan friend,,, we must embrace real brotherhood,,, love your neighbor irrespective of tribal background,,,,I urge every Kenyan to speak words of peace and how we can make this country the reference of Africa,,,God bless kenya