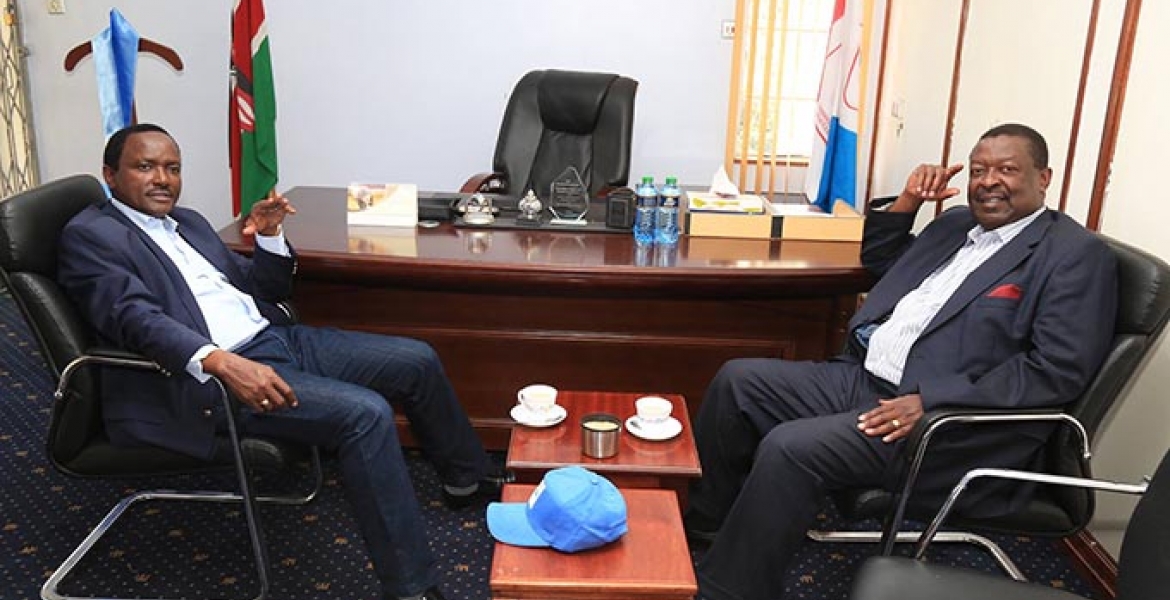 The Standard reports that opposition leader Raila Odinga, who will play a key role in the Cabinet changes following his March 9th handshake with President Uhuru, is keen to have the two included in the new team.

The shakeup in Cabinet is said to be part of President Uhuru and Odinga's secret meeting held last week at the Coast. Sources say Raila could be given at least four Cabinet slots in the changes while Jubilee fills the remaining 17.

“There are some negotiations going on. There is something in the offing for Kalonzo, that I can assure you,” a Wiper Senator told The Standard.

The newspaper further reports that the Head of State could make a tour to Raila's Nyanza backyard after the reshuffle. Current Cabinet Secretaries whose dockets have been adversely mentioned in corruption scandals face the axe.

“More surprises await us in coming days. The President is planning a major re-organisation that will not spare his office,” a Jubilee insider told the publication.

Is it another nusu mkate? From presidential candidate to a sport minister/CS

This is good. All eaters will be on the table. This will help in discarding the Dynasties together come 2022. The country will be in its last corruption days until 2022 when Kenya will have new real leadership. This government should also include Watengula, Gideon Moi, and any others who are part and parcel of the Dynasties, so they can all vacate politics together 2022. God help Kenya!!

I hope this is just muchene/A JOKE. Should the president go ahead and name these clowns back to the government after the kind of politics they ran- stopping people from voting and vouching for chaos , then this will be the dumbest political mistake the president will have made.I have no problem including people from other parties for the sake of peace- but for heavens sake leave out the so called "principals" out of it.Besides, exactly what do people who have served in government for a combined total of 100yrs plus bring to the table? Does the party- Jubilee in this case got anything to say about the new arrangements? The president must not take the sacrifice Jubilee people made- at the risk of their lives for granted.Voting amid chaos and intimidation by his new found buddies who were ready to burn the country to achieve their selfish goal.Besides it tell all those thugs who do not believe in democracy that chaos pay! The sacrifice both in resources/lives lost by people of the Rift should not be trivialized unless the president does not care for peace. To be seen to embrace the railas/kalonzos at the expense of the Deputy President is political suicide by the president and his effort at peace will be naught. The losers as it were 10yrs ago will be the vulnerable Kenyans who must pay for perceived betrayal- It must not happen!The trio of raila and group must come to the table humbled by their stupidity/selfishness/ and unpatriotic antics that have twice seen the country dodge a bullet.They must agree that no matter how aggrieved they may have felt at the polls they owed Kenyans a gift of peace and live to fight another day.Gloating and chest thumbing as if they are heroes is so misplaced and shows how juvenile the trio is.Kenya owes you nothing! You have benefited at the expense of all Kenyans and now even in your twilight years think the government cannot run unless you are included? Nominate young Kenyans in your parties who are not tainted by blood of Kenyans and guide them to serve selflessly. As one from Rift and who has suffered chaos any political move that seems to sneer at the generosity and desire for lasting peace is playing with fire.I support the president's desire to bring everyone on board and especially those who felt they lost unfairly, but the outreach should be the people and not individuals who to this day have not accepted the fact the were DEAD WRONG IN THE WAY THEY SOUGHT RESOLUTION.They lied to the people/continue to lie and for that there should be no REWARD.No single Kenyans no matter how "special" should threaten the peace of million innocent children and expect to get away with it.

This is very very good ... it should serve as a lesson to poverty stricken kenyans to stop the uhii of fighting each other coz of politicians ... the politicians only care for themselves .. yet poverty stricken hungry kenyans die every 5 yrs coz of politics ... kenyans must mature up and stop been ihii .. i hope this is a lesson they will learn ... infact, uhuru should also appoint muthama and orengo to the cabinet .... then create a PM position and give it to raila ... if Kenyans dont learn from this, then they can continue to die every 5 yrs as the politicians continue to wine, dine and fu*k together ... TIBIM ... KUMIRA KUMIRA .. TIBIM

Never forget this, politics is a game of numbers and there are no forever friends or enemies in the game

The Standard reporters have given up on Journalism. Why would Kalonzo and Mudavadi give up the huge ex-VP benefits to become CSs?