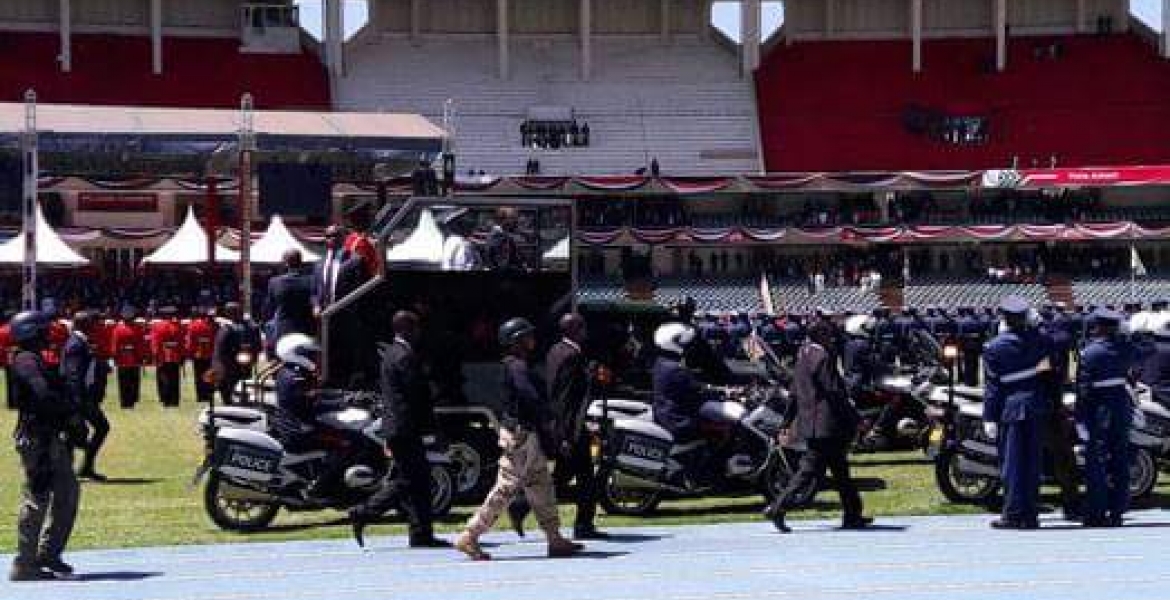 Unlike the huge number of Kenyans that turned out for President Kenyatta's inauguration ceremony on November 28th, Tuesday's Jamhuri Day celebrations at the same venue was marred by very low attendance.

By 10am on the day of President Uhuru's swearing in ceremony, gates at the Kenya's biggest stadium had been closed as the 60,000-seater ground had filled beyond its capacity. There was even a stampede at the gate as Kenyans attempted to forcefully make their way in to witness the historic moment.

However, on Tuesday, things were totally different. Very few people were seated at the stadium by the time the head of state arrived to preside over the 54th Madaraka Day fete. As usual, Kenyans on Twitter made their own interpretations on why the important function was 'boycotted' by Kenyans under #EmptyKasarani hash tag.

Here is a few reactions we sampled from Twitter;

@ Pal_Jeff said: "Kasarani is as empty as the polling stations were on the 26th October referendum # EmptyKasarani."

@ Disembe alleged: "As late as 10.am people were still being bribed to get to the stadium...there was a group of people paying Ksh200 outside #EmptyKasarani stadium."

@ Paperboyrocks notes:" I thought my TV has an echo problem. Kumbe it's the
#EmptyKasarani stadium echo.."

ODM director of communications @ EtalePhilip said: "They transported people to Kasarani two weeks ago to lie to the WORLD... today they have been left with an egg on the face #EmptyKasarani."

@ 2030Kevo says: "#EmptyKasarani Uhuru r u still serious that this country we are together? I kno deep in ur heart u feel this Kenyans want Raila."

Election fatigue. Most Kenyans except a few from the lake region are tired with anything politics. They need a little time off.

That's it. I chose to take the first row seat in my sitting room, not because I do not believe in Uhuru, but am tired of anything holiday... staying off work, anywhere with an inkling of siasa...it's that bad, BUT I love my Uhuruto government .. at least now I know we are headed for a greater Kenya. BRAVO Uhuruto!!

UhuRuto Raila's foot. These 2 Fraudulents Consulted with Devil Worshipping in Baringo and no wonder Empty Seats and Many Deadly Vehicular ACCIDENTS in Moi's Own BACKYARD in the Past Few Days. It's like When UhuRuto visited Moi, Moi and Ruto AGREED to Sacrifice (to the Devil) their own People via Road Accidents. So Sad.

At JustMe....I am also going to sleep on my couch. Wake me up when Kenya becomes GREAT AGAIN!!!

You can afford to be a couch-potato because baba is taking you to canaan without a sweat...your baba will give handouts and you will loot for supplies and kill even the mama mbogas to provide for your families. Stay in canaan, this side of Jubilants, we work hard.... we don't wait to be GIVEN...nothing is free.

Jubilants don't live in Utopia, they know they have to work to provide for their families.

nabado !!!! that is exactly what will be happening throughout his second term

Sasa am sure jubilee have known that "kumbe hawajui"....Raila ndo kusema majamaa

Muthamaki has been rejected by WANINCHI. Just remember you STOLE anothers BLESSING and it will NOT help you situation. Return the LOOT! Otherwise mali[po ni HAPA HAPA TU.

@Mbingu aka Guest 1, Wrong. Kenyans are tired of mung'etho at Kasarani. Independence day celebration after all those voting "holidays" has not translated to food on the table. UhuruRuto Kenyans are telling you there's no time to waste, get back to work cos next election is coming and who knows the opposition may be competent come 2022.

Jubilee is not 60,000 people; Jubilee is more than half of the nation. But, they are tired of politics; normal NASA people are tired too; however, the goons, goonetts, and hooligans are energized as they scale around on where to loot next.

Most of Raila's followers are goons and idlers that will rise to any of RAO's occasions. Why?? They have nothing else better to do. Election and political fatigue caused mainly by the goon in charge RAO has many Kenyans just wishing things political away and focus on nation building instead. Not that they don't like Uhuruto. They love the duo to death. Shhh

Do you know the meaning of nation building?

There was no voting at Kasarani, nor was there any threat from Kony's goons, so why not take things easy and watch the show on TV in your house or some club somewhere. Attendance is a poor proxy for support or lack of it, especially when existential threats have been neutralized. But if it makes nasarites happy to yap about attendance, have at it and yap till 2022...

All the projects you have deposited bloodly money shall automatically fail.

Uhuru tried to fuck worldwide by bribing and transported them on his day of inauguration and today He and his idiots were fucked at Kasarani live!!It's the prove that on 2nd term will be Most Corrupt on bribing anywhere to blackmail worldwide!!

Uhuru tried to fuck worldwide by bribing and transported them on his day of inauguration and today He and his idiots were fucked at Kasarani live!!It's the prove that on 2nd term will be Most Corrupt on bribing anywhere to blackmail worldwide!!

its due of high cost of life.Do way I could go in ceremony bearing in am empty pocket and at 9t I need to eat.

@mbingu, bure kabisa. Mafi ya kuku. This was not a popularity show or a stone throwing contest. You can choose to attend or watch from the comfort of your coach. For stone throwers like you, tupeni mawe kwa tv. Useless

This pple commenting negatively here cannot even pull a 50 group of pple n yet they r vomiting trash or poison with their stinking mouth.25000 pple attended n yes it’s holiday season pple r busy n much tired of politicking.We wanted to apisha Uhuruto n that was done n Uhuru is the president for 5yrs n Uhuruto will take over til 2032 so wenye wanataka kuhama kenya kama amakombe can do so n return after 2032 Uhuru son akitake over??Waafrica we gat small brains in deed!Uhuru oyeeeiii.Maendeleo iendelee while naswa continues with their devo warshipping mentality

If the turn out had been as bad during inauguration,then it would be something to worry.But again some might say, they came to see the dignitaries from other countries,and not Jubilee being sworn in. Either way, the celebrations were too close to each other.People have things to do.This is no negative reflection on Jubilee.People are just tired of gathering every week.

Mugi, I second your opinion. The wise also stayed away due to uncertainty of how NASA would behave. Everyone's tired. Having said that, never seen this before in my lifetime, it's embarrassing.

acha mambo na kufa,at a we so wachuma you can b one of the dead

Crowds do not make a population. Crowds are essential when there is popularity contest or street demos. Now that politiking is behind us and for some peculiar reasons tinga imezimika, its time to think about my own backyard and household. Phew! it was a long long year for pundits and pedestrians alike.

Jubilee has got no followers what they do they just ferry people from all the conners of this country to kasarani... Wangefanya ivo Jana

Equivalent to the poor voter turnout.

do those people really fear God? do they know the dangerous of using abusive ward against any leader? May GOD forgive them.

There was no money to transport people from Riftvalley and the greedy supporters from Central wanted more money wakaambiwa shauri yenu. Ati you can watch from the comfort of your couch in what utopia are you living.Most people would rather sleep .These are the results for stealing an election.Now all of a sudden they will work with the opposition really ?

Uhuru has diminished in status and image after allowing himself to be ridiculed and mocked by Raila and his supporters. He should have asserted his authority over Raila and averted the crisis that ensued after the August 8th election. I think people feel let down by Uhuru due to his passiveness hence the reason for the low turnout during the repeat election and also the inauguration ceremony. Raila has really rained on his parade