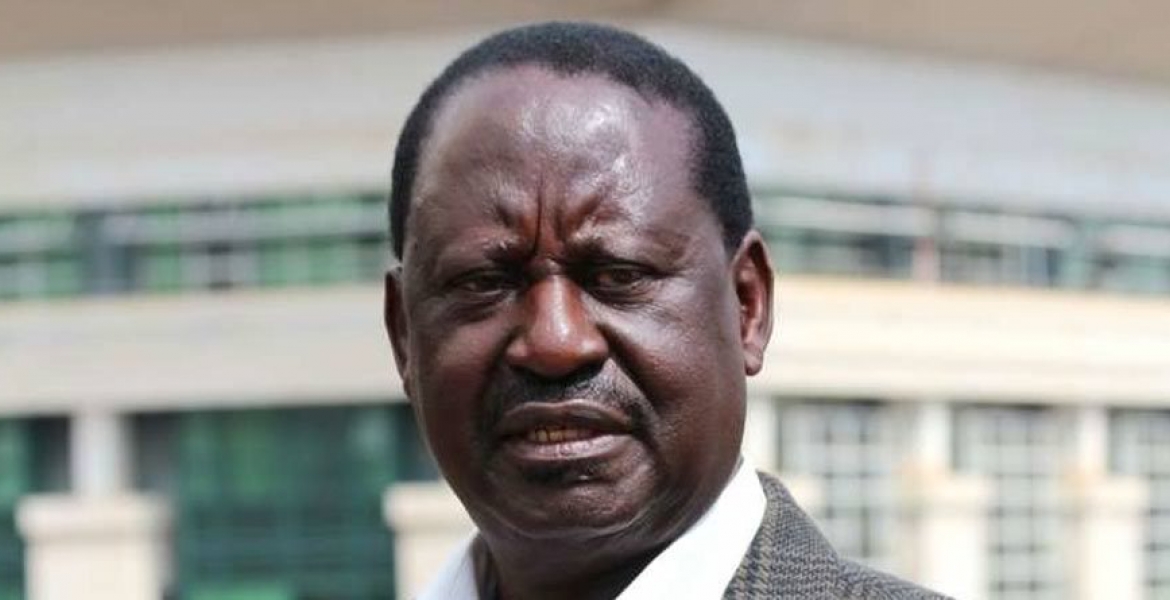 President Uhuru's Jubilee administration has laid down a plan to counter what it believes is a diplomatic effort by National Super Alliance (NASA) leader Raila Odinga to paint Uhuru’s re-election as illegitimate.

Sources within Jubilee indicate the party will embark on a vigorous shuttle diplomacy to debunk Raila's 'lies' before the international community. This comes after trips by Raila to the United Kingdom last month and the ongoing tour to the US, where he has sought support for his plan to resist Uhuru's government.

Among powerful nations Jubilee plans to woo include the US, UK, Germany, Russia, China and Russia, the main aim being to make them recognize Uhuru’s presidency.

“We have our foreign mission in Washington DC and in New York. I will make a trip with other leaders to the Congress sub-committee on Africa so the lies he is peddling do not add up,” he said.

It should not be very hard to fight Raila's lies in Washington especially now since all three parts of US government, Presidency, House and Senate, are all Republicans who all to a man LOATH George Soros dirty tricks smeer campaign financing including campaign to turnish Trump through Russian dossier which now has been exposed to have Democrats's links and financing.

You guys think you own the Truth.In my opinion jubilee and the likes is the Cancer that will kill Kenya as we know it today.Ni kweli Tumbili haoni kundule.

Didn’t I read somewhere that the county is dead broke and intents to borrow a loan to service an existing Euro-bond loan? My sixth sense question is where will Jubilee shadow diplomacy “ gang” leverage money for their cause? Urgh!!!!!!

enya GDP $70.53B USD as of 2016.
Microsoft Annual Revenue $89.95B USD as of 2017
US 2016 GDP $18.57T USD ($18,570B USD)
Uhuru Kenyatta & Family net-worth $500M USD
Raila Odinga & Family net-worth $250M USD,
Bill Gates net-worth 89.7B USD
Average Kenyan salary: $76 USD per Month
Average US salary: $4,650 USD per Month
An average Kenyan needs to work for 5 years to make the equivalent of what an average American makes in a Month.
World largest slum dwellings:
Orangi Town in Karachi (Pakistan): 2,400,000
Dharavi in Mumbai (India): 1,000,000
Kibera in Nairobi (Kenya): 700,000
Khayelitsha in Cape Town (South Africa): 400,000
Neza (Mexico): 1,200,000
Are you not outraged?
At this rate, we will become slaves again.
Getting rid of these current leaders and putting in new ones has been tried from Zambia to Nigeria.
What should we do then?
The solution starts with you getting outraged and then you can start to figure out where we have done wrong and start taking action. No one will take action on your behalf. Blaming the West, the North or the East, the Luo or the Kikuyu is escapism and will not solve your problems. The solution starts with you giving up your tribe for the country, giving up your tribe for the continent. The solution starts by taking the initiative to understand good governance, economics, finance, education, human rights, freedom of speech. The solution starts by standing up to your tribalist friends and educating them that tribalism has made us poor and weak. It has benefited very few and improvished the rest of us. It has made our natural resources targets from the North, the West and the East. Donald Trump put it this way, "Africa is where my friends go to get rich". Translated in Swahili, "Vita vya panzi ni furaha ya kunguru".

Within the last twelve years more than two thousands Kenyans bodies lay underground in the landscape of Kenya crying for justice. Some are marked and others unmarked. some have decayed, some are still decaying having been laid down as recently as August 2017. If dead people were to talk all of this bodies will tell you they are in their graves because RAILA "said". Some will say"I was hiding in a church but Raila said I stole people's land even though I had bought it with my money and so they came to the Church and burned me alive". Some may say "I voted in an election but Raila said it was rigged and to told us to demonstrate so I went and threw a stone in a Police Station and I got shot dead". Still others may say "I was five years old when a stray bullet Killed me. It happened when I was playing outside and people were demonstrating and saying Raila Said this". The truth is Raila incitement has killed more people than all current African dictators combined. Raila is in the same league as Idi Amin, Joseph Kony and Cambodia Pol Pot. Hundreds of thousands of Kenyan are still living in IDP camps because Raila caused them to lose their land and homes. Hundreds of abled Kenyans businessmen are out in the streets begging for food because Raila ordered demonstrations which resulted in their businesses burned or destroyed and now cannot afford to support themselves. Life is very unfair indeed. While Raila caused graves dot our country Raila's life continues to be showered with all types of gifts-Prime Ministership, Pension fund of over KShs thirty Billion, Invitations to Washington, London and Paris, Chairmanship, Prime audiences, Unparalleled Security, etc. Ask yourself "would something like this happen in Europe or American?". The answer is NO. More blood is bound to be shed in Kenya if this succession talk doesn't end. More blood is bound to be shed in Kenya if this demonstrations don't stop. Kenya is in crossroad because of this man Raila and you know one thing he cry a Ocean but "Raila will NEVER be President of Kenya"

I believe you meant ...more blood is bound to be shed in Kenya if this SECESSION, not succession, talk doesn't end......

Succession talk is taken care of by the vote...

Did someone leak supreme judgement to jubilee? Why sudden jittery and shivers. ..🙆🏻‍♂ lightening has struck the house of Mumbi..and by the end of Raila...fiasco some people will be chewing on grass. Amadioha!!forbid 🙆🏻‍♂🙆🏻‍♂🙆🏻‍♂ UHURUTO have bankrupted Kenya the duo is mockery to Kenya, Thieves guarding Kenya
Suspect#1 Njoki..Ndugu
Suspect#2 Ojwang🤣🤣

Raila did not meet anyone of value in the US. Jubilee, dont waste money on shuttle diplomacy that will yield zero results. Raila met and talked to the no-bodys in the US.

and how do you know that? Pure lies. He has met the people who needed to see him. Did you expect to be broadcasted? He has and i don't have to defend that in details.

It seems that supreme court judgement has been liked that guru's sham election will be upheld and that's afact.However the Diplomacy shuttle missions is a waste of taxpayers money instead improve infrastructure and electrification of rural areas.Jubillee or uhuruto government will continue with scandals as usual till kenya goes down.It is sad that Raila's election has been stolen for the fourth time.A man who has fought for Democracy we enjoy now.Dont waste money on Diplomacy try to fight tribalism and unite Kenyans. Ruto will go on rampage looting more money this time because he knows that he will never win in 2022.Kenya is lead by thugs. People who maneuvered cases at the ICE supreme court of Kenya is nothing to them.Sad sad.

Jubilee read Mwakilishi and you will know what happened when fake Joshua was in USA. People tell it as it is nothing to hide. Why waste your money with such useless trips

My dearJP, you shouldn't play second fiddle in matters of grave concern. With all your incumbency and resources, why not be proactive rather than reactive. Life happens in the meantime, do not ignore the meantime, meantime could be eternity. You cannot push decision and action to until...this or that happens. Times have changed and pulling a kibaki one (calculated silence) will not do. Engage, engage engage even if it means godly name calling. Do not count your money backwards my JP, it is counterproductive.

@OneDay .. mundu wa nyumba - i personally gave up on these JP pu$$ies kitambo - infact, I expect raila to be sworn in as president before Uhuru even sobers up .. a whole incumbent is waiting on a judge to tell him whether he will be sworn in or not - even after 2 clear wins - hio ni upuzi ya aina gani - meanwhile, nasa or nrm is making preparations for raila's swearing in not caring what maraga will say .. infact, an alien visiting kenya might think raila is the incumbent while uhuru is the opposition leader putting up a spirited fight .. mimi sijaona ujinga kama hii and i am not a young person .. it is like taking a gun to shoot at a mosquito that is already biting you ,,,

Jubilee need to fight Raila by exposing this man history of terror from 1982 coup attempt to his terrorist activities recently. When you preach hate and destructions of properties then you are not different from terrorists. The international community need to be aware of this Raila agenda in Kenya and fight him the way they fight Alshabab. If we have to win terrorists war in East Africa we must start with labelling Raila as a new alshabab and expose hi diry political agenda. i.e to get to power through force.

You are fake Joshua. I hope you realize that you will never become Kenya's president with your history of coup and terrorizing Kenyans . So go lie to people in Kibera and tell them the that you are taking them to promise land.

Raila has really maligned UhuRuto too long too much, and gotten away with it... RAO has used all media to spread lies, smear mud and dirt until the truth looks like lies...ALL THE WHILE, JP, stayed tight-lipped... not even trying TO PUT THE RECORD RIGHT ...Why JP? RAO blatantly, publicly uttered treasonable words and nothing happened to him -- IS RAO ABOVE THE LAW???