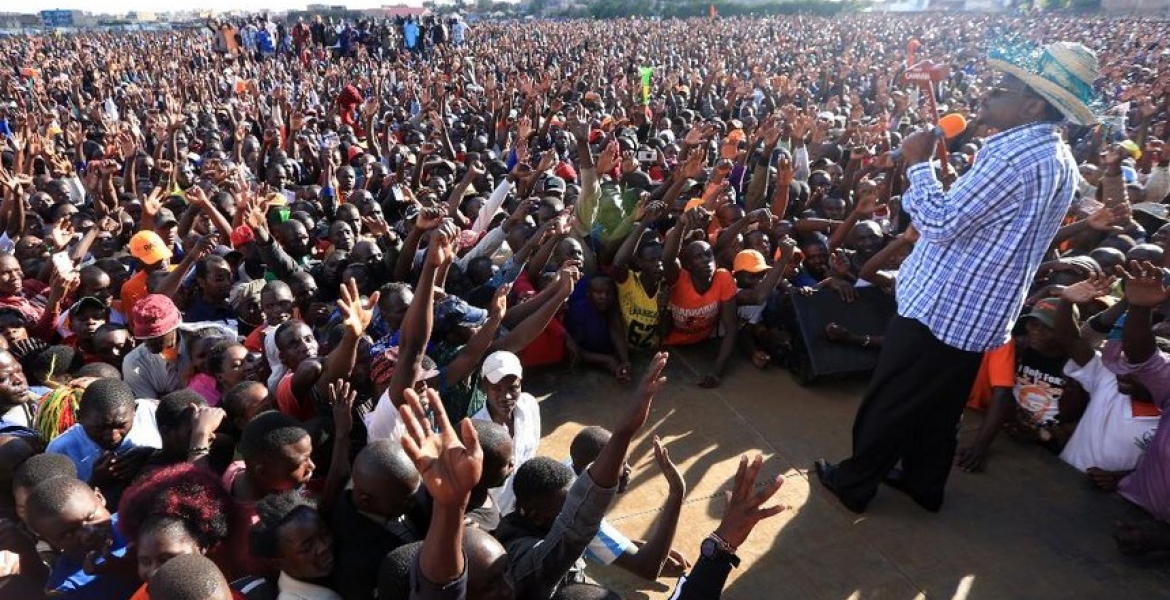 National Super Alliance (NASA) leaders say that swearing-in Raila Odinga or seceding will be their only option if President Uhuru takes Oath of Office for his second term.

Speaking during a rally at Jacaranda grounds in Embakasi East on Sunday, the leaders led by Siaya Senator James Orengo vowed to resist the Jubilee administration.

“We are using the law and the Constitution in this revolution. During the Kanu regime we wanted multi-partyism, but President Daniel Moi said no. Then we went to the people - did we get multi-partyism or not?” Orengo posed.

Orengo said Nasa will use both People's Assembly and the National Resistance Movement to resist Uhuru Kenyatta's Presidency, adding that Nasa must complete their journey to Canaan.

“One of resolutions in the motions passed in the county assemblies says someone elected by 30 per cent of voters cannot be recognised as the President. Stand up firm for your right by saying enough is enough. We must reach Canaan,” Orengo said.

They asked supporters to arrive at Jomo Kenyatta International Airport (JKIA) in large numbers on Thursday to welcome Raila as he arrives from his tour to the US.

Keep payukaring! It is your right. Orengo, you carry no credentials to speak for Kenyan people. Wear your cuban military gear and go into the forest. That way we can deal with you as a terrorist. Wacha upuzi.

Tell them to do both without threatening if they are real men and they will regret the day they were born. Do it if you are real men

Raila ondinga and NASA use dead bodies to raise to power and now that Uhuru's swearing in is obvious to all, NASA mass violence and killing is on top gear. These mass protests are for maximum dead body counts to display to the world and blame Uhuru.Our policemen are on catch-22, if they leave the goons alone to pillage, they will be blamed for endangering people and property and if they act, including defend themselves and some protesters are injured or dead, woe-unto them. But what may be under the radar, is where these goons may plant killers among themselves, kill their own protesters and obviously blame Jubilee- that's how desperate these people are. And by the way, can Rao people tell us what police officers are supposed to do when protesters come hauling stones and other missiles? How would USA' anti riot police officers behave if protesters were peleting them with stones?

PAYUKARING kitu gani you people have lost this battle lest you result to matusi tupu.
AMKENI!

The perils of ruling by tyranny of numbers oiled in ethnic balancing security/economy/Judiciary of Kenyans cannot be guaranteed by incompetent individuals selected on tribal or party alignment basis .uhuruto the most useless duo ....toothless

When you see nasa in overdrive, something is not working their way, once again this may have something to do with Rao's trip to DC that may not have turned out. On the other hand its activities are reminiscence of warning shots to the on going petitions at SC.

Everytime they issue this threats, I am left shaking in my slippers. But what bothers me more is the anticlimax they leave me in come the day of reckoning. Tafadhali wacha kutukatsia namna hiyo jameni. I will leave you with this from Benjamin Franklin's autobiography; "resolution virtue: resolve to perform what you ought; perform without fail what you resolve." Anything else ni matisho tuu and should be dismissed with disdain.