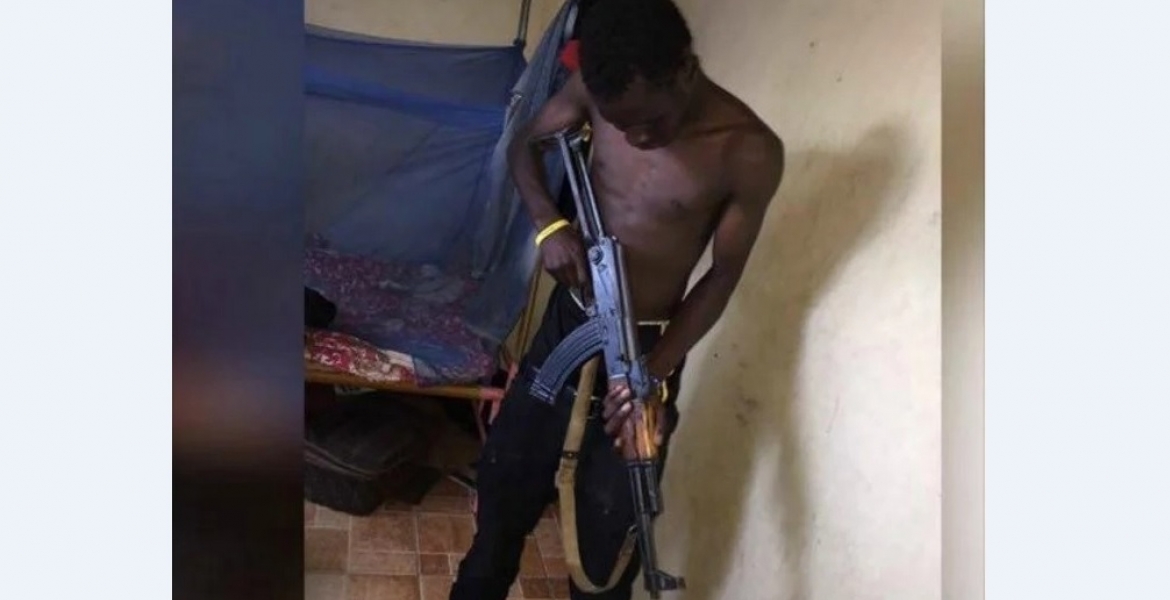 Kenya Police on Wednesday announced the arrest of a man they say has been posting inflammatory messages on social media, calling for the killing of people opposed to anti-IEBC demonstrations.

Police say Daniel Ochieng Omondi, 31, was arrested in the Githurai are of Nairobi where a search of his residence yielded three live 9mm rounds of ammunition and materials police suspect was to be used to make improvised explosive devices (IEDs).

“Omondi has been posting messages on his Facebook account calling on youths from a particular community to rise up and defend themselves,” said Assistant Inspector General of Police Kinoti George in a statement.

“One of the postings was accompanied by a picture of himself holding an AK 47 rifle. The suspect was arraigned in court today, and 15 days Custodial Orders granted to facilitate further investigations,” added Kinoti.

“Tomorrow will be the beginning of the end of my days on this planet… so I pray to God that should I go down tomorrow during the demonstration I will have to take as many dogs as I can with me,” Omondi had written on this Facebook wall.

Kinoti warned anyone posting inflammatory or hateful messages on social media that police are on the watch and will deal with them in accordance with the law.

They should start by arresting the leader of the pack- ODINGA. I am sure there must be a dark web these politicians are using to communicate with their followers. The riots and resignations, etc are very organised. How is this going undetected by the Kenyan intelligence service?

You talk foolishly. Eti sukari. You got no flavour. leave Raila out of this. You will be arrested next. Let me know your location so I can come and arrest you.

Sukari. The PERSON who Messed Up/Hid Forms 34s abd lRIGGED the Election on 8/8/17 is the one to BLAME for RIOTS and RESIGNATIONS.

Jail him and throw away the key !

formerlyguest 2. How many Mingikians (in Uniform and Dreadlocks) have been ARRESTED since they Began Killing People in Kisumu, Nairobi, and other places?

C'mon then, I dare you! If you can't take the heat get out of the kitchen! Raila is a criminal and murderer, for he is responsible for the poor rioting in the streets. I said before and I will repeat:You guys have nothing but hot air projected by abuse, so abuse away...that makes me no less the person I am. It just amplifies my point re: your ignorance! Karibu! Unatisha nani, you want us all to live in fear. Mshindwe!

BTW, what arresting powers have you got? You are not in government yet, but your delusions are playing tricks on your mind that you are. Matusi kwa wingi na akili kidogo. RAILA should be held accountable I maintain. Looks like I pressed a nerve...we are not all blind to your wicked ways, we just don't have the power as the Uhuru's of this world and neither are we ruled by blind and misplaced loyalty to anyone. Look at the way the NASA are likening Odinga to God.

We Imara nawe! Nenda uka preach huko mitaani ambazo wana riot! How come huyu chali haja ku arrest, given you have been saying these guys should step down? Jesus, take the wheel for I can feel the girl who grew up struggling but proud to be Kenyan burning to spew the anger, lakini by doing so, I am no better than these good for nothing inciters!