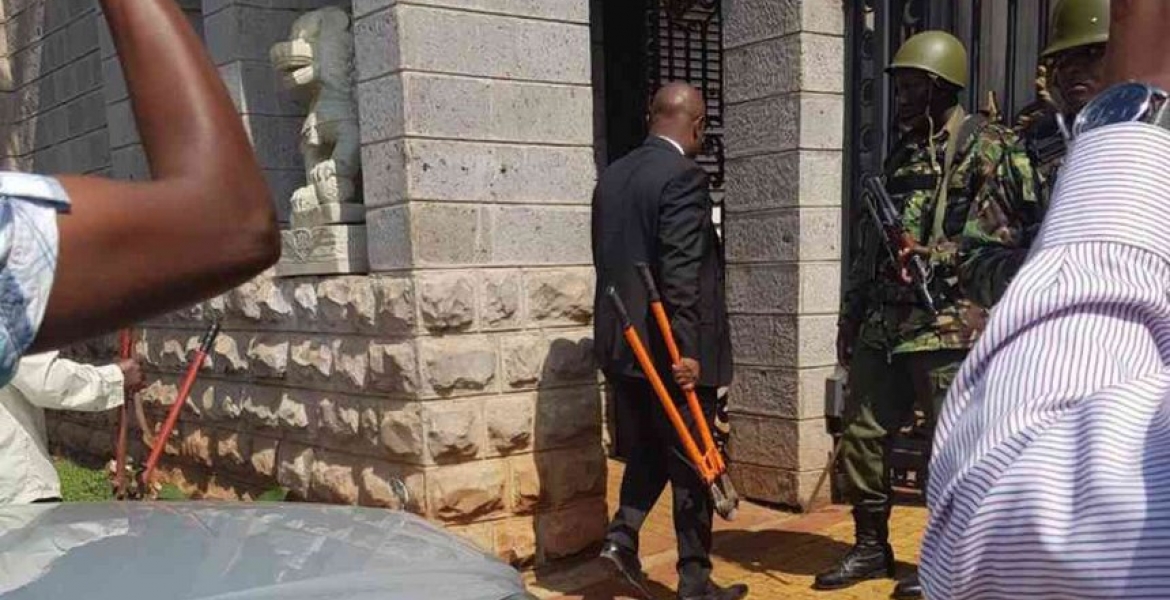 Police from the elite GSU Recce Squad on Tuesday broke into the residence of billionaire Jimmy Wanjigi in Nairobi's Muthaiga estate in a bid to arrest him in connection to arms recovered in a house in Malindi linked to him.

Police detectives believed that the controversial businessman locked himself inside the palatial home in order to resist arrest.

Officers from the General Service Unit camped at the residence the entire Monday night hoping to search the house and arrest Wanjigi, but the entrance to the residence remained closed.

Officers were on Tuesday morning seen carrying crowbar and sledge hammers into the residence after obtaining orders from the court to search the home.

"We are aware he is locked up in a bunker but we are interested in what is stored inside, forcing him to lock us out," said one who did not want to be named told the Star.

A search warrant seen by the media was issued under the command of Chief Inspector Joseph Gichuki granting permission to raid Wanjigi's house in Muthaiga, Caramel Club at ABC place along Waiyaki way and his offices at Kwacha House in Westlands.

On Monday, NASA leaders led by Siaya senator James Orengo termed the raid on Wanjigi's Muthaiga home as politically instigated, due to his open support for opposition National Super Alliance.

Wanjigi is said to be the main financier of the opposition candidate Raila Odinga's campaigns.

Wanjigi and his wife Irene Sisa have already moved to court seeking anticipatory bail on any arrest over the saga.

The businessman also sought orders barring police and DPP from trespassing and searching his private residence.

"The raid has been concocted to embarrass and falsely accuse me and is meant to settle political scores," he says through lawyer Jackson Awele.

He further claims that he has been subjected to "untold mental and physiological torture" by police officers who have been "intimidating, trailing and curtailing his freedom of movement and right to privacy" over the last three months.

Mr wanjigi., you can ask orengo and baba to be with you in a jail cell. Your money can't and will not oppress Kenyans.. you are wanted by interpol and I am sure they have the leak.. no more protection ti fund criminals and the wakora 4 maraga et al., You should be extradited to face charges in US thisbus fbe begginjng wanjigi

How has Jimmy Wajingi oppressed Kenyans??

NYAYO DAYS ARE BACK AGAIN. NYAYO HOUSE HAS BEEN RENOVATED!

You cannot continue to finance criminals to destabilize our country. I guess you forgot ati "Serikali ina mkono mrefu". Raila can see what is happening to you and that is reason he is suspending demos. You and him will be going to the ICC.

I have no sympathy for this man. what is he doing with multiple guns and bullets? What is it exactly that he does. He needs to declare his wealth to the last cent he has in his pocket. NaSa again protecting pple of questionable character others drumming the Moi era is back. Give us a break, hypocrisy is one of the reasons RAO can not win. UhuruRuto still have to deal with corruption BUT Raila is a thief of diasporian money, people are dying in the streets because of him. Nairobi county was being used as their kitty, Sonko has stopped it. Look at Kisumu surely, what have they done for Kenyans there? NOTHING!. And Kibera? The flying toilet capital.

Looking at the way the soldiers are behaving and acting at Wanjigi's residence, reminds me of SS Troops in NAZI Germany, - The Gestapo. Is this the Kenya that we want?

Toroitich, will you please retire in peace and stop teaching and advising Uhuru and Ruto your tactics of terrorizing the masses and abusing our constitution as you did during your 24 years of "hell" in Kenya! After all you are the person who brought Uhuru and Ruto into politics. Why can't you leave Uhuru and Ruto alone the way Dr. Mwai Kibaki has done? You should pay Kenneth Matiba the one billion shillings that he is asking the government of Kenya. You ruined so many peoples lives and now you still want to revive your decadent rule through Uhuru and Ruto as your sycophants! I am quite confident that Our first true and real chief justice of Kenya Dr. Maraga will not let you get away with your evil schemes about our beautiful and lovely country of Kenya!

How can the police break into a house with the glare of cameras? I guess it should read they force their way into...