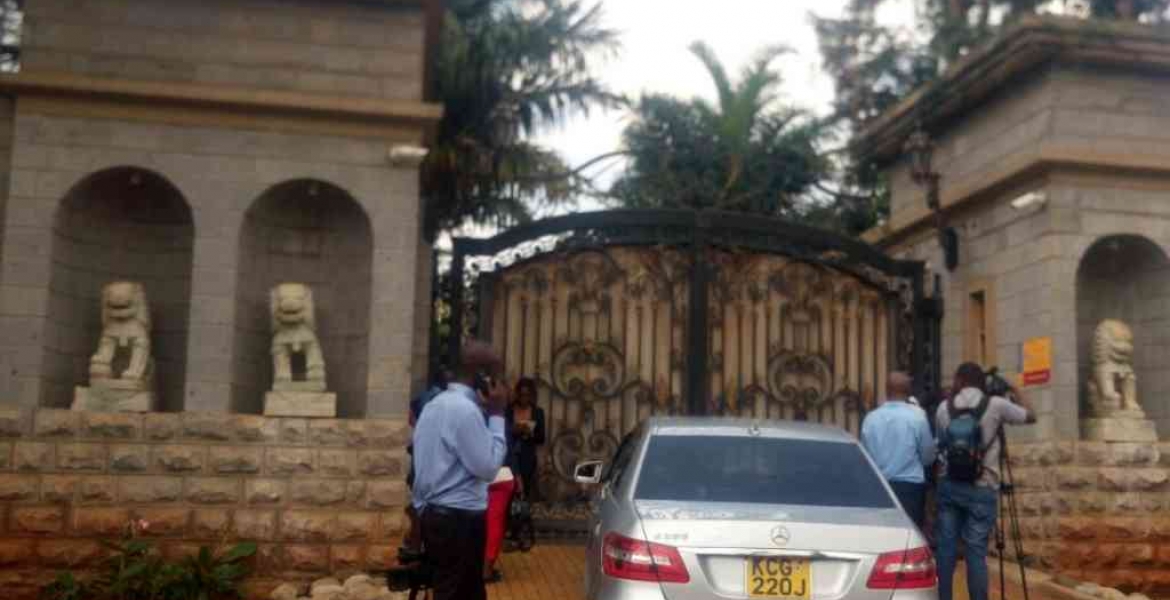 Officers from the Flying Squad on Monday afternoon raided the home of billionaire businessman Jimmy Wanjigi in Nairobi.

The officers conducted the raid at Wanjigi's residence located opposite to that of US ambassador to Kenya Robert Godec in the upscale Nairobi's Muthaiga estate.

The operation comes after detectives nabbed five AK47 guns and hundreds rounds of ammunition at another house in Malindi, Kilifi county believed to be owned by the controversial tycoon.

Four employees working for Wanjigi were taken in for grilling by detectives.

A similar raid was carried out at the Muthaiga residence by officers attached to the Special Crimes Prevention Unit on Monday afternoon.

Neither the businessman nor police have issued a formal statement regarding the whole incident.

Raila could be using Wanjigi's wealth to conceal funds from The European donors(say Evil Society) since it will look like it is Wanjigi's money.Duh!

Uhuru Good job. Crack that whip.. This people are terrorizing kenya. Spare No one. I applaud this effort

Nothing better than dealing with a snake from the head. We know about George Soros... Neutralized. Now this other snake...being dealt with. I am sooooooooooooooooo proud of UhuruRuto. Time to stop this nonsense on its tracks. Kwenda kabisa! Bure kabisa!

MEANWHILE: The Following is a List of Thirty Four (34) of The People Who Died in the IEBC Demos:

These are DEMOCRATS; not TumboCrats.

Pathetic! They died in vain...mislead by an idiotic evil misleader for Shs.500/- while he slept in his karen home surrounded by his kids and wife enjoying a hot meal. He coaxed the poor, vulnerable youth to go against the laws of the land...to throw stones and loot innocent people's businesses.... THEY THAT WERE NOT TAUGHT BY THEIR PARENTS or THEY THAT GO AGAINST WISE TEACHINGS get taught by the world. How sad for a parent-figure to be luring poor kids to death!

I hope someone will tell these poor kids to do what the laws of the land dictate...otherwise, death is imminent.

O God!
This is horrible.
The Kenya police needs to stop killing Kenyans.
This is not right.
God have mercy on us.

Nobody forced them to go and throw stones & loot. They knew the danger that come with such behavior. Nurses have been on strike/demos almost the whole of this year. None of them has been killed by police because the hold peaceful demos

CORRECTION; NASA INSTIGATED DEMOS to create chaos in the country NOT IEBC demos = CRIMINAL ACTS = TERRORISTIC acts= JAIL TIME= LIFE in Prison in countries where you go to lick white pple booties to destabilize your country which is CRIMINAL+TREASONOUS. Fool these are the creators of democracy which you sing to us all day long.

Be very careful. Those who are old enough to remember Moi regime

Where did he get the guns and what are they intended for? Just asking?

Where are the bunker shots?

RAO financiers, there they are! Si huyu ni mkikuyu? They eat together na nyinyi jinga mnakula huu. Kenyans better see and learn... TRIBAL POLITICS ARE JUST FOR YOU AND ME...to keep us busy hating each other so that WE STAY DIVIDED AND EASY TO BE MANIPULATE!

When we go back to our hoods, mama Othis and mama Waithira wataombana kasukari... while RAO na Wanjigi and making million-dollar deals that you and me pay thro' the nose. Be wise, my dear Kenyans!

My take is that they got what they deserve because no one forced them to demonstrate against their will.

It's death at will. The list can even get to 100 if need be.. they must follow orders and not assault the police. Police you have every right to bear arms and we are pamoja kabisa. Protect mwananchi from this thugs. That's a list of shame raila and orengo should pay for their burials

All these guys are just looking a their personal interests. I mean all of them.