Kenyans Online React as President Uhuru Campaigns in the Rain 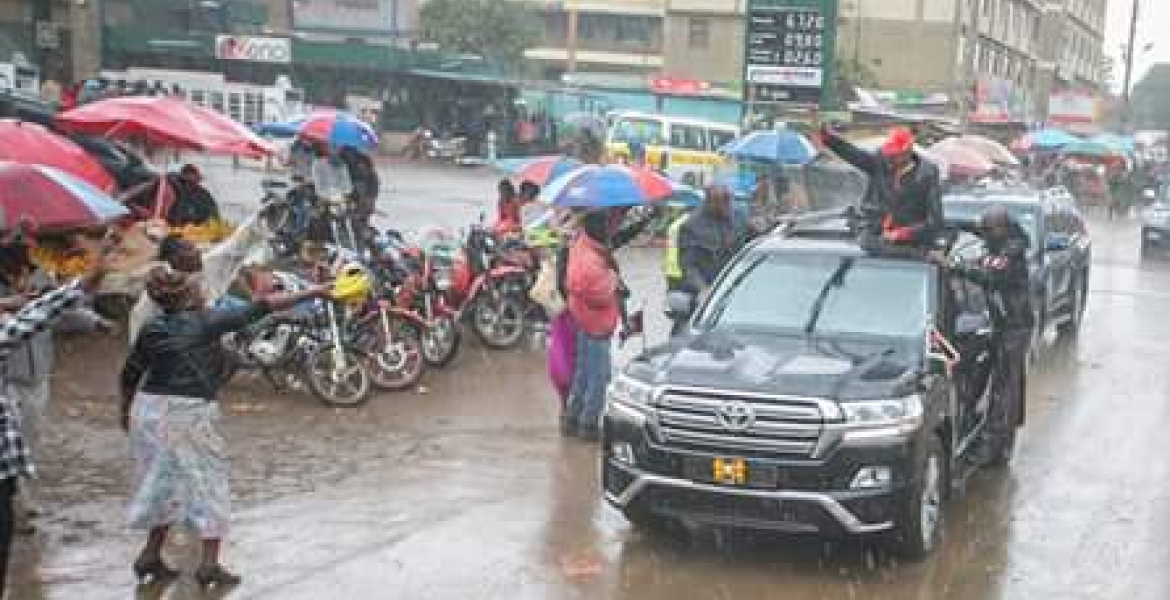 Kenyans on social media have expressed mixed reactions after President Uhuru Kenyatta was pictured campaigning in the rain in
Nyandarua County on Sunday.

The President and his Jubilee brigade were met by heavy downpour while on a campaign tour to Nyahururu town, but the President was undeterred by the rains.

He proceeded to coming out of his vehicle to wave to the residents who stood on the roadside to cheer him.

The photo was widely shared by online users, and, when some lauded the head of state for being 'humble' others dismissed it as a mere PR gimmick.

Bob Erastus said: " He is Pretending that he cares."

Ndegwa Samueli notes: "We Kenyans know this and for sure Uhuru is far much better than Raila Odinga.he is humble and has a true heart for kenya.ata Kama nitakuwa Bondo on 26th Oct come rain come sunshine I shall vote for you my president."

Karani Jane:" He is a committed leader who wants nothing else but peace an development in our country."

Cira Wa Kiore said:"He was rained on? what !Thats a chosen one! So God anointed him that everyone could see?.Even THE BLIND MISE OF NASA!,".

Renson Mbae says: " Not even rain can stop him from saying hi to the people bcoz he just values them n for sure we need leaders who recognizes that common mwananchi at the grass root. The message here is that the president is saying he is not any different or special,".

Evelyne Atieno: " That's desperation.if he won fairly he should relax and wait for the next election."

Gakuta James said: "Awesome. What is more interesting to me in the photo is that huge crowd of thousands in the background that also withstood the rain. See even the old mama on the top right that is waving the Jubilee flag without a care about the rain. Clearly we have the numbers."

If you want something, you pursue it. Uhuru wants to make life better for Kenyans for another 5 years; so, neither Raila, the Supreme Court nor rain can deter him. We say, Rain or shine, itafanyika.

He should start making lives better by getting all the money stolen from NYS and health ministry and all the wasted money that went to SGR which is not living up the promised glory. Kenyans we are easily baited, the guy talks a good game but he presided over the most corrupt regime in history, if he really cares he should have these thugs prosecuted. Magufuli on the other hand is the kind of a leader that we need or even Kagame. Ujinga, kwani kunyeshewa ni nini?

So when did you do the NPVI ,payback or IRR of SGR so as to know that it has not lived to its promised glory. Stick to a subject matter than you know and leave the financial analysts do their job . Bure Kabisa, criticizing for the sake of it and if Mafuguli is all that and some, apply for citizenship there, tired of people who can't see anything good

Not that I know more than Ufisadi but fact is that he's raising some really weighty issue here. I personally have beef with the Jubilee administration for not having fought corruption, the real cancer that has kept the country from going forward in spite of having one of the best human resource pools on the continent and indeed, the world. From the unaccounted for Eurobond, Afya clinic container installations debacle, the extremely expensive SGR (compare it with the Ethiopian & upcoming TZ ones), and a host of others, UhuRuto have disappointed many. I completely understand & appreciate ur "half full glass" attitude & you may rightly call mine a "half empty" attitude but fact is that the glass is NOT full coz of institutionalized sleaze in government. Why should Kenya of the 21st century be talking about hunger & famine & poor access to health facilities & education for it's millions of poor citizens? Why? Kenya's a rich country but alas, it's not rich enough for all the unbridled greed at all levels! I don't support NASA either coz it's an outfit representing the other side of this messed up coin - they are just looking for an opportunity to "eat" and further destroy country. We all need a very serious RE-THINK of exactly who we are and more importantly, what we REALLY want for our country. At this point in history, CORRUPTION and TRIBALISM are the biggest threats to the nationhood of Kenya. Get rid of these and we'll soon be catching up with the South Koreas, the Malaysias, the Singapores, the Chinas of this world ....we started out together but somewhere along the way, the rain started beating us real hard. Ombea nchi.

You are the chosen one. Fake joshua on the hand is busy complaining about servers being relocated from France. Kweli we have someone so damn.,

'Choosen' by who?? Because it is not God.
Here is a list of Kenyans killed by the Uhuru Kenyatta's government:

He was shot dead in Kariobangi, Nairobi, on August 11.

His body was found at the City Mortuary.

He he was shot on August 11 in Dandora during protests by Nasa supporters.

He later succumbed to his injuries at the Kenyatta National Hospital.

He died instantly after being shot by police on August 11 inside his home in Dandora, Nairobi.

He died on his way to hospital after being shot by police outside his gate in Dandora, Nairobi, on August 12.

He died in his house out of shock in Dandora, Nairobi, on August 12.

He developed shock after being caught up in clashes between police and Nasa supporters.

He was hit by a teargas canister where he inhaled tear gas at Kawangware Stage Two, Nairobi.

He died at the KNH on August 9.

She was eight months pregnant when she met her death.

She fell after police fired teargas and she was trampled by a crowd at Kawangware No.56 on August 9.

She later died at KNH.

He was shot through the head by police on August 9 at Kawangware No 56, Nairobi.

He died on his way to the hospital.

He was shot dead by police in Satellite/Kawangware, Nairobi, on August 9.

His body was traced to KNH mortuary.

He was shot in the abdomen.

He died from internal bleeding at KNH on August 120.

He was from Kawangware No 56 in Nairobi.

He was shot on his leg where he fell down and was trampled by crowd on August 12.

She is from Kawangware Stage Two.

She was hit by teargas and inhaled pepper spray on August 12.

She died on her way to hospital.

He died at KNH after he was hit by teargas, fired at a close range, and inhaled pepper spray on August 10.

On August 11, he was caught up in riots.

He was shot in the back while running away from the police in Kawangware No 56, Nairobi.

He died instantly and his body was traced to KNH.

The Tanzanian national and was an employee of San Valencia restaurant in Karen.

On August 11, he was hit in his chest by teargas fired at close range range.

He bled through nose and mouth and died at KNH on August 18.

He was from Kinyanjui area, near Kawangware, Nairobi.

He was an employee of G4S.

He was beaten by police and left for the dead on August 11 at Kawangware No. 56 in Nairobi.

His body was soaked in blood.

He died of internal bleeding and severe organ damage while awaiting treatment at KNH.

He was shot by police at Kinyanjui area, near Kawangware, Nairobi, on August 11t.

He was buried in Busia, western Kenya.

He was beaten by police on August 12 in Mathare 4A-C area, Nairobi.

He died on admission to hospital.

He died instantly after he was shot at the back at No.10 on August 9.

He was from Mathare 4A, Nairobi.

He died instantly at No. 10 after he was shot in the back on August 9.

He was from Mathare 4A,Nairobi.

He was shot in the chest on August 9 and his body was traced to City Mortuary.

He is from Mathare North, Nairobi.

He was shot in the chest in Mathare, Bondeni area, Nairobi, on August 12.

He died instantly along Juja Road after he was shot in the chest on August 12.

She hit news headlines after she was shot in the chest while playing on the balcony in Mathare North, Nairobi, on August 12.

Another victim from Mathare North, Nairobi, who was shot in the chest at a close range on August 13.

He died instantly near his house.

He was shot on August 12 in Mathare North, Nairobi.

His body was traced to the City Mortuary.

He died instantly after being shot in the back in Babadogo, Kasabuni Area, Nairobi, on August 12.

He died instantly after being shot shot in the neck and in the hip while on his knees on August 12.

He was shot dead while on his knees in Babadogo, Kasabuni area, on August 12.

His body was traced to the City Mortuary with five bullet wounds.

He was shot dead in Kibera, Nairobi, on August 10.

His body was traced at City Mortuary.

The daughter of Geoffrey Onacha (above).

On August 11, she collapsed and died upon seeing her father’s body in Kibera.

He was beaten by police on August 12 in Kibera, Olympic area, Nairobi.

He died a day later at the Muthaiga Hospital.

He was shot dead at Kibera Olympic area in Nairobi.

His body was taken away in a body bag on August 12.

The body yet to be found by his relatives.

34. Persons between 17 to 27 unconfirmed cases from various parts of Nairobi.

The areas include Kawangware, Kibera, Mathare and Dandora on dates between August 9 to 13.

Anyone can come up with a fake list online if they wanted to..... Here is a list of people killed by Rao;
1. Hon Kanyare
2. Mwai kibaki kimani........and the list goes on

Ati clearly he has the numbers big joke he was in a Jubilee zone can you not see the mama offering him a bunch of bananas hoping to make a quick buck. Desparation in full display.A

@ Peter, how many Kenyans have you killed when you've jerked off?