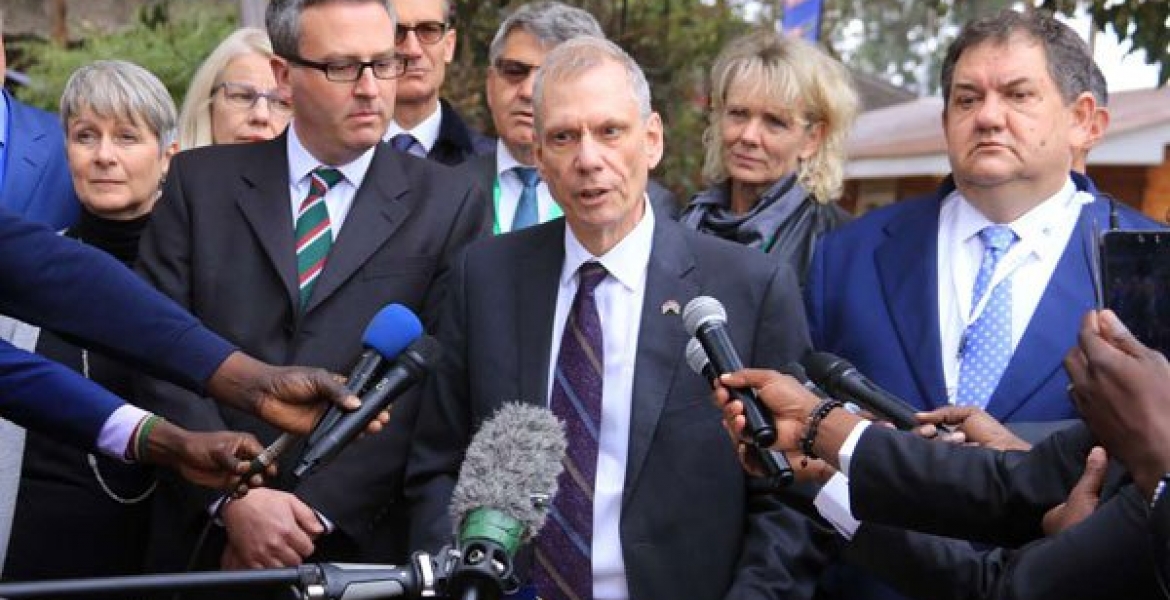 Speaking on behalf of foreign diplomats following a meeting with the Independent Electoral and Boundaries Commission (IEBC) at Bomas of Kenya on Monday, Godec said that the move by Jubilee would be against international rules.

"The timing of the laws is a serious problem that requires careful reflection. Avoid changes to electoral rules prior to the elections," US Ambassador Robert Godec said.

"All should give IEBC the space it needs. So, do not paralyze the IEBC for it is the only institution that has to run the elections," he said.

The envoys urged stakeholders to engage the electoral commission in dialogue instead of fighting it.

"We urge all parties to engage the IEBC in dialogue...the commission should make reasonable deliberations and offer free and fair elections," he said.

They urged the government and IEBC to allow the media to cover the election freely in order to increase transparency.

"Freedom of the media should also be protected. Unfounded and baseless attacks must stop since they undermine the law," he said.

"The international community is watching Kenya in every step of its electoral process," Godec said.

The Bills, sponsored by Baringo North MP William Cheptumo were tabled in Parliament last week, with both Senate and National Assembly forming a committee to collect public opinion on the changes.

Opposition MPs stormed out of Parliament when the bill was tabled, accusing Jubilee of changing the rules of the game at half time.

Nasa has vowed to oppose the passing of the proposed changes, saying they would take Kenya back to the dark days.

Oh no, I hope Uhuru ignores their proposal. We need the amendments ASAP.

Necessary to drop the electoral amendments but NASA must also drop the stupid demands they have on IEBC. It must be a two way street. IEBC must be allowed to hold elections on October 26 without threats and/or interference. Raila must end this menace.

Please You should be calling your country and encouraging your president Trump to act presidential and slow down on North-korea. Siasa Zetu please wachana nazo. Talk about other issues not elections. Raila is a thief corrupting and brainwashing everyone with his demands, ultimatums and shenanigans. UHURU we are ONE and we Love you president.

I personally think that the amendments are necessary in order to seal all the loop holes that could be (and are) problematic.We want to make sure that the country will be in a legally stronger position come the repeat elections.

It is paramount and necessary,in my opinion, for Jubilee to make the amendments inorder to seal all the loop holes that made it possible for the supreme court of Kenya to wrongfully steal the election from the electorate by annulling the majority(1.4M) vote.

this wazungu are speaking when hey are silent on unfair annullment of prezo elections.
They listen to stupid and mzungu bootlickers called nasw that delves with lies and propanganda....

Hi wazungu ....plz deal with your nations tragdies like one in las vagas where innocent were killed like animals....by those citizen who worked so hard but neglected in their retirement....

we all know mzungu never wanted to leave Kenya and other colonies since wanted to continue to plunder our resources of African nation including Kenya.
Now since mjinga akierefuka mwerefu ako mashakani...the mzungu want to use raira to continue with indirect colonization.
how comes they think raira and his wakora principalsxand maraga 4 are clean...
Leave gava alone....

Funny how Godec lectures us how a validly elected body like our Parliament should not make or change laws this close to an election! How then do you (Mr Godec) explain gerrymandering in places like Wisconsin & Arizona, when you want to subvert the will of certain population. Quit lecturing us and fix your electoral system first. We will fix loopholes that were taken advantage of, as we deem fit. See yah...

Where was Godec when judge Odunga was busy passing rulings that affected the 8/8 elections? The rulings were this close to the elections. Where was his outrage when rao constantly demanded changes to election body etc., Before the 8/8 election and now before the 10/26 elections? What kind of double standards are these? Godec must be a member of the evil society out to take the chabashi from jubilee's mouth!

Do you need a quick long or short term loan with a relatively low
interest rate as low as 3%? We offer business loan, personal loan, home
loan, auto loan, student loan, debt consolidation loan e.t.c. no matter
your credit score. We are guaranteed in giving out financial services to
our numerous clients all over the world. With our flexible lending
packages, loans can be processed and transferred to the borrower within
the shortest time possible. We encourage you to contact us and learn
more about the loans service we offered. If you have any questions or
want more information about our company, please do not hesitate to
contact us: wordfanece@gmail.com