IEBC Officials Absolved of Criminal Intent by the Supreme Court 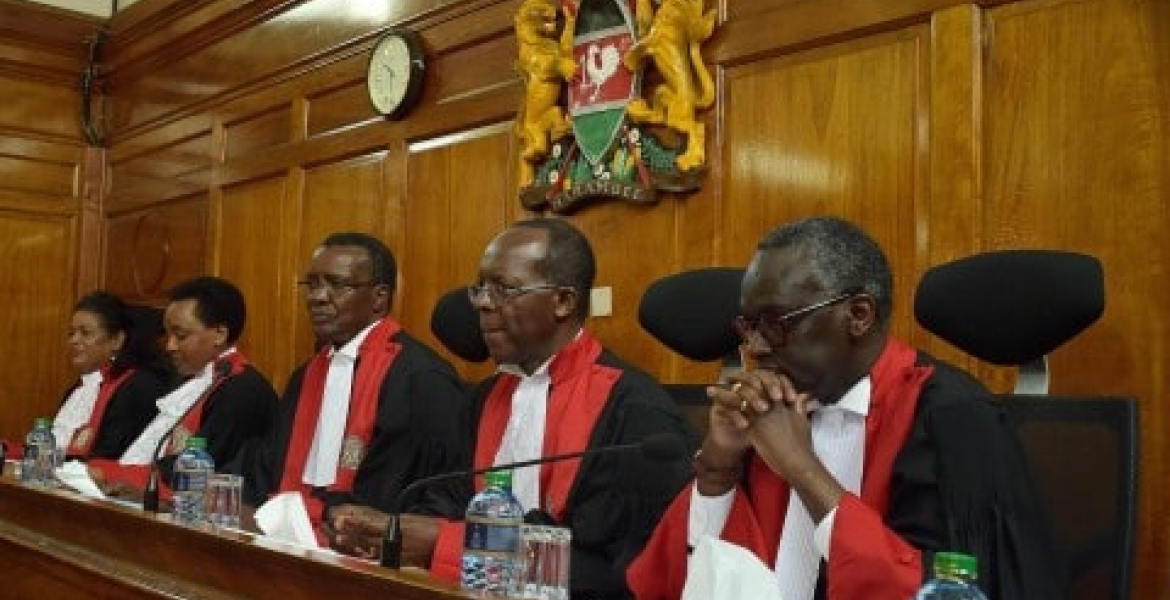 The Supreme Court of Kenya on Wednesday ruled that no individual commissioner or officer of the Independent Electoral and Boundaries Commission (IEBC) nor the electoral body as a whole acted with criminal intent in the August 8th presidential election process, which the court nullified.

The court, while delivering a detailed judgment on Wednesday following the nullification of the election on September 1st, said that while the IEBC followed to strictly follow the law in the process of vote transmission and declaration of Uhuru Kenyatta as the president-elect, there was no evidence that any official of the IEBC failed to do so with criminal intent.

“No evidence was placed before us to prove that electoral offences were committed by officials of IEBC. What we saw in evidence was a systematic institutional problem and we were unable to find specific fingerprints of individuals who may have played a role in the commission of irregularities,” Chief Justice David Maranga said while delivering the judgment.

“We are therefore unable to impute any criminal intent or culpability on either the IEBC Chairman or any other Commissioner or member of IEBC,” added Maraga.

In other words, Safaricom should save what is left in economic sabotage and run an election by SMS to repeat what we already know, 'Uhuru Kenyatta was and is the duly elected president of kenya.'

Okay Raila, you said IEBC officers should be rotting in jail since your are the judge a jury. @Guest1, help me here!

Sokora. So tell me: Is the Nullification of Uhuru's so-called "win" on 8/8/17 going to be Reinstated? If so, I will help you; but if NOT, then I can't help you. Na Wakenya wakutanie kwa Debe tena. Au Raila atangazwe Mshindi na Inchi Iendelee.

@Guest1: Debe is the way to go in less than a month. Let’s only hope NASA does not run to court again to try and get nullification a second time. NASA hope is coalition government but this will have to wait. Not now! I assure you RAO has already lost many voters who voted for him on August 8.

This Supreme Court does not seem to understand their role in the country it's playing with us the electorate. They have refused to give us credible answers for nullifying the elections, they have the same problem they're accusing IEBC of. They did it just because!
Since all these systems are broken, i.e IEBC does not know whow to count votes, and Judges are irresponsible and donot know how to pass judgements, then why have another election. What we are after is perfection and our systems not capable of that. The word is the next election will be imperfect too, so what are we going to do. The change we are looking for start with ourself its not outside there. And there is no systems out there which is going to bridge the political divide we find ourselves in, other than God. Peace,be well.

This Supreme Court one would have thought they had a slam dank case.. like secretary kerry and other international observers said there was no ringing uhuru win and should be reinstated. No need to waste money with senile geritaric raila amilo ojinga

We are knew the allegations were baseless. Njoki did research and invested time. Her judgment 180+ pages same as Ojwang 178+ pages. However the rest of justices all combined had 120. Give us a break. You had made kangroo based rulings with no evidence o back it up. Uhuru lets swear you back in and deal with this compromised justices. In fact though they receive judicial immunity they should somehow be punished for having put the country in an economic turmoil. I Have come to see light I was NASA before but I can't thank You President Uhuru for your leadership and keeping country at peace. I know you have opportunities like critics may suggest but as humans we all have opportunities to work on. Raila Please go home and retire peacefully you will go down as the worst liberator for war and violence. You have caused division in which we were healing from as a country. You should be ashamed of yourself

If irregularities were a result of systematic institutional problems,and these institutions are run by human beings,to me it follows that someone is culpable.
Criminal or no criminal intent, the results are the same.Its like a student studying and gets an F,the student might as well not have studied since the results would be the same...Which means that this systematic institutional problems that lead to the nullification of Uhuru's will will still be there come October 17th...Right? or do we have time to fix these problem before then?wow.I am confused.

Sokora let me help you here. If Uhuru's so-called "win" on 8/8/17 was Nullified on 9/1/17 by the SCoK and the Nullification Empasized/Validted on 9/19/17, this means Raila WON the Election and He is Destined to be President of Kenya very soon.

Uhuru you have God's favor. You will win BIG.

This creates lots of ambiguity. No substance, "no evidence was presented before us..." why then cherry pick on what to pursue and what not to. If there are irregularities and illegalities in the IEBC, is it not SC responsibility to pursue the sources of such illegalities? what if the petitioners are the villains, what if there was sabotage? My conjecture is that as a country we are adopting too much from outside without proper infrastructure being in place. Like in the camel and tent tale; we may find ourselves kicked out of by the complexity we so promptly adopt at the expense of our actual place in history and time.

This was a simple Case.The margin of Victory(1.4M).The election was free and fair.The will of the people was clear.Therefore the Judges should have just affirmed the will of the People.And sworn in UHURU.The losers of the election would have gradually accepted and moved on.Yes there were irreguralities, but these were apparently negligible since they did not affect the overall expression of the will of the People.Thus IEBC would have learnt from the election and made changes for next time.Then Kenyans would have moved on with activities of Development and Nation Building.Most People around the world would have then thanked the judges for affirming the will of the people.I hope the supreme court Justices get it right the second time around on OCT 17th.Because UHURU will win with an even bigger margin.